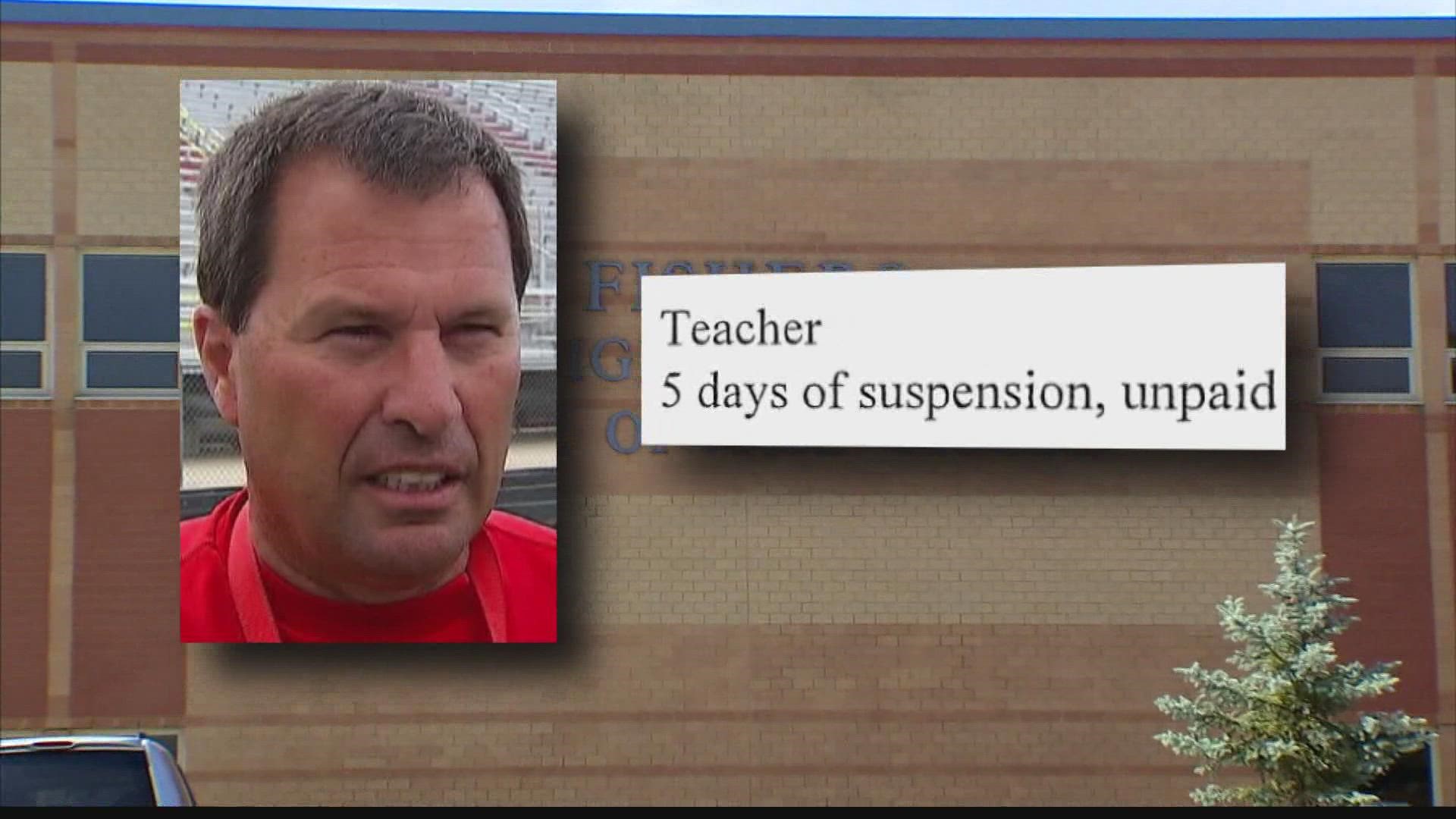 INDIANAPOLIS — A legal dispute between WTHR and Hamilton Southeastern Schools is now headed to the Indiana Supreme Court, and the court's decision will help determine how much information the public has a right to know when a public employee is disciplined or fired.

Exactly five years ago, the Hamilton Southeastern School Board and Fishers Police were conducting an investigation involving Rick Wimmer, who was then in his 11th season as a teacher and head football coach at Fishers High School.

The investigation focused on an altercation that had taken place between Wimmer and a student, and according to a police report, the incident began when the student arrived late for class.

The student's mother later confirmed for 13News that her son was one minute late for his physical education class when Wimmer allegedly rushed at her son in an aggressive manner and pushed him backward.

"My son was 16 years old and the coach is a grown man. You should have enough life skills, you should have enough patience and enough professionalism to be able to prevent yourself from charging a child, and that's exactly what he did," said Joniece Brooks, who also told 13News that Wimmer informed her son that he was being dropped from the football team.

Wimmer was placed on paid administrative leave and not permitted to coach a football game during the investigation. Police determined no additional action was required, the school district completed its investigation and Wimmer quickly returned to his roles in the classroom and on the sideline.

It appeared the situation was resolved. But new action taken by the Hamilton Southeastern School Board several months later would raise more questions about the coach and trigger a lengthy legal battle.

Three months after the Wimmer investigation, Hamilton Southeastern Schools quietly voted to suspend employee #10042. The move, exposed by 13 Investigates and announced only in a consent agenda approved by the school board, was highly unusual. 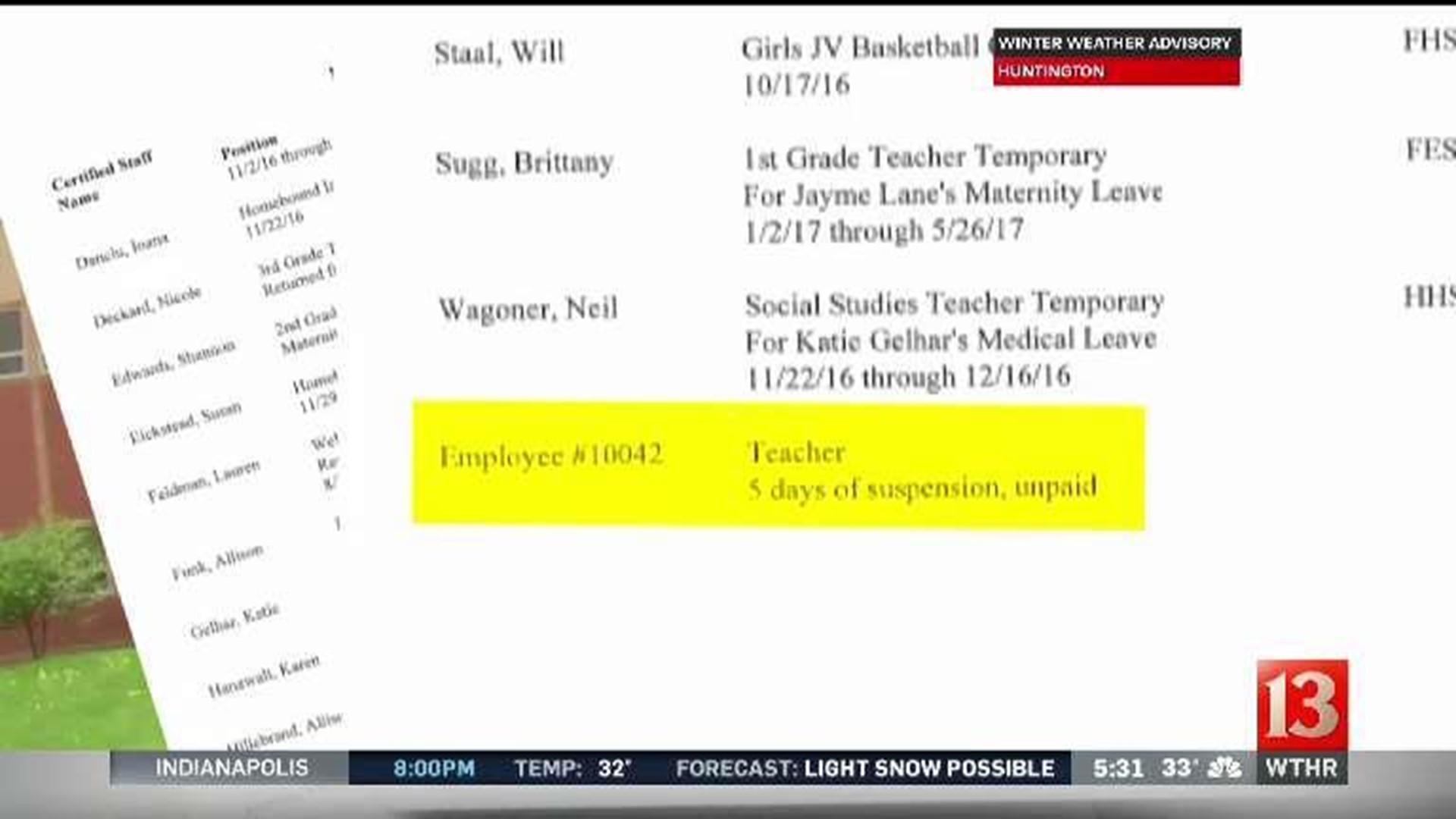 The consent agenda listed 38 employees by name, along with their specific position and the action being voted on by board members. But employee #10042 was not identified by name — only by number — and was listed only as a "teacher." That teacher was suspended without pay for five days.

After several inquiries by 13News, the school district identified employee #10042 as Rick Wimmer. But Hamilton Southeastern Schools would not tell WTHR whether the suspension was related to the previous altercation that had been investigated by the school board and Fishers Police or for a separate incident that had never been made public. School officials, based on advice from their outside attorneys, decided to keep details about the suspension secret — even though Indiana's Access to Public Records Act requires public schools to release that information.

"They violated the spirit and intent of the law," Britt announced in 2017 after releasing one of his opinions. "When something like this happens, the public has the right to know what happened."

Britt’s comments are based upon the requirement in state law that public agencies (including schools) must release a "factual basis for disciplinary action" whenever an employee is suspended, demoted or fired.

HSE has not released a factual basis. The school district has told 13News only that it suspended the coach for "not implementing instructions for classroom management strategies" and for violating school board policy G02.06.

That policy is written in vague language such that an employee of Hamilton Southeastern Schools could be suspended for dozens of different reasons, such as failing to "demonstrate behaviors which contribute toward an appropriate school atmosphere."

WTHR believes the school's explanation gives no "factual basis" for the suspension, which violates Indiana's public records law. The state's Public Access Counselor, who is charged with interpreting the law and intervening in compliance disputes, agrees with 13News' position.

"It's that modifier — factual — that's important. That implies the General Assembly intended more than just a passing reference to a policy. It requires an actual detail or tangible fact to let the reader of that factual basis know with some level of confidence what happened and why that employee was faced with suspension, demotion or discharged," Britt reiterated last week. "I think the law is pretty clear."

The Hamilton Southeastern School District disagrees. Its attorneys, who've collected thousands of dollars in legal fees while advising the HSE school board to withhold more information about Wimmer's unpaid suspension, argue Indiana law does not clearly define factual basis and, therefore, the vague information it previously released is enough.

The school district has maintained that position even after the coach texted WTHR in October 2018 — two years after 13News first asked the coach to give more details of the suspension — to say his unpaid suspension approved by the school board in December 2016 was related to the same classroom situation that the board and police had already investigated.

"The 1-week suspension was for this same incident... I was initially given a paid leave which converted to unpaid leave after investigation was complete ... It was the same incident," Wimmer wrote. (He has since left Fishers High School and now serves on the football coaching staff at the University of Indianapolis.)

When asked to confirm if Wimmer's statement was accurate, HSE superintendent Allen Bourff and attorneys for the school district declined to comment to 13News. To date, HSE has not released even the date of the event(s) that led to the former Fisher football coach's unpaid suspension.

Because Hamilton Southeastern Schools still refuses to disclose specific facts about the suspension and because decisions by the Indiana Public Access Counselor are only advisory and cannot be enforced without seeking legal action, 13News exercised its right to seek a remedy though Indiana courts.

With legal support from Reporters Committee for Freedom of the Press, a not-for-profit organization that provides legal resources to protect First Amendment freedoms and the newsgathering rights of journalists, WTHR filed a lawsuit against HSE to protect the public’s right to information. The lawsuit, filed in Hamilton County Superior Court, asked the court to require HSE to provide a "factual basis" that includes … well … actual facts.

So far, both a trial judge and the Indiana Court of Appeals have sided with the school district's position that Indiana law does not mandate a more detailed explanation to provide a sufficient factual basis.

After a successful request for transfer to the Indiana Supreme Court, the case is now going to the state's highest court. The state Supreme Court has agreed to settle this lingering question over "factual basis" and what the community has a right to know when public employees are disciplined or fired.

"It's pretty significant," Britt said of the Supreme Court's decision to hear the case. The public access counselor believes the final opinion could benefit not only Indiana’s citizens, but also hundreds of public agencies.

"This has the potential to open it up for every agency to say, 'OK here's the standard, here's what you have to provide in terms of factual basis so there's no question,'" he said.

In recent years, WTHR has reported on other school districts that have suspended, demoted or fired teachers and administrators without telling the public why. The cases prompted an Indiana lawmaker to propose legislation that would have more clearly defined "factual basis," but the legislation was killed in committee before it ever received a public hearing.