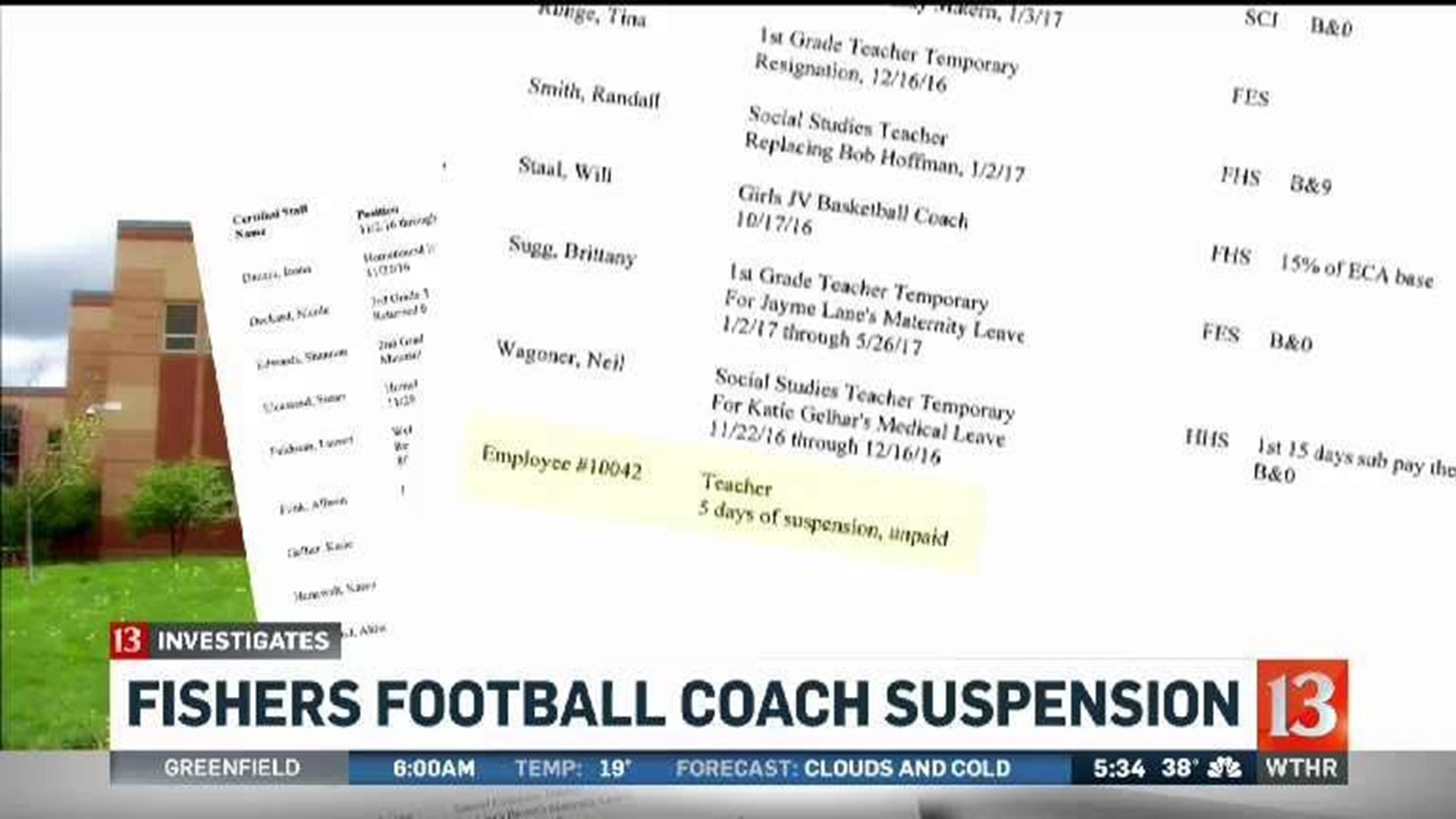 The HSE school board quietly approved the unpaid 5-day at its December board meeting without ever mentioning Wimmer's name -- in fact, the only public record of the discipline shows only his employee ID number 10042. (Prior to that meeting, all other HSE staff who received suspensions were listed by name in the board agenda.)

The suspension came three months after Wimmer was placed on administrative leave for a confrontation that occurred between him and a student at Fishers High School. According to a police report, the student arrived late to class and refused instructions to move to the back of the room. Police say that's when Wimmer placed his hands on the student's shoulder and upper chest. Detectives say the entire incident lasted about 5 seconds -- but long enough for both the school district and Fishers Police to investigate.

It seemed the situation was over. Then the board issued its secretive unpaid suspension in December.

Despite repeated questions and requests from Eyewitness News, HSE’s superintendent and legal counsel declined to clarify whether the suspension was related to the previous classroom incident or for a situation that occurred later. In several e-mailed responses, HSE said Wimmer was suspended “due to not implementing instructions for classroom management strategies” and “due to not following Board of School Trustees Policy G02.06.” Both of those explanations are extremely vague and, in WTHR’s opinion, fail to provide facts required by Indiana law.

Indiana’s Access to Public Records Act requires a school district to publicly release “a factual basis for a disciplinary action in which final action has been taken and that resulted in the employee being suspended, demoted or discharged.”

WTHR filed its complaint with the Public Access Counselor after HSE declined to provide such details.

In his advisory opinion, Britt acknowledged that schools walk a fine line between protecting sensitive employee information and providing information to the public. But a 4 page report was critical of HSE for not providing transparency involving Wimmer’s suspension, and he said the school district’s response to WTHR was "lacking sufficient detail.”

“A reader of a factual basis should have some tangible indication as to why a public employee is disciplined,” Britt wrote. “Factual basis contemplates at least a fact. I would argue that a fact equates to a detail specific to an incident or set of incidents… I trust HSE will take these considerations under advisement and craft a factual basis which strikes a balance between employee-student privacy expectations and a reasonably transparent description of what actually took place.”

Following the Public Access Counselor’s decision, the school district has yet to respond to WTHR’s renewed request for a more detailed factual basis related to the coach’s 5-day suspension.

Earlier this year, Wimmer told 13 Investigates he does not want to discuss the discipline that the school board issued against him.

"I'd really rather not comment on it. It's kind of a done deal. It's behind us now,” he told WTHR by phone in January. “They did what they felt they needed to do. They have to put things in public to a degree, but they can also protect people if they choose to. From my perspective, it's over."

WTHR will update this story after we receive a reply from Hamilton Southeastern Schools.