Dave walked the halls of Isidore Newman School with Peyton Manning as the quarterback reminisced about his younger years before being inducted into Pro Football HOF. 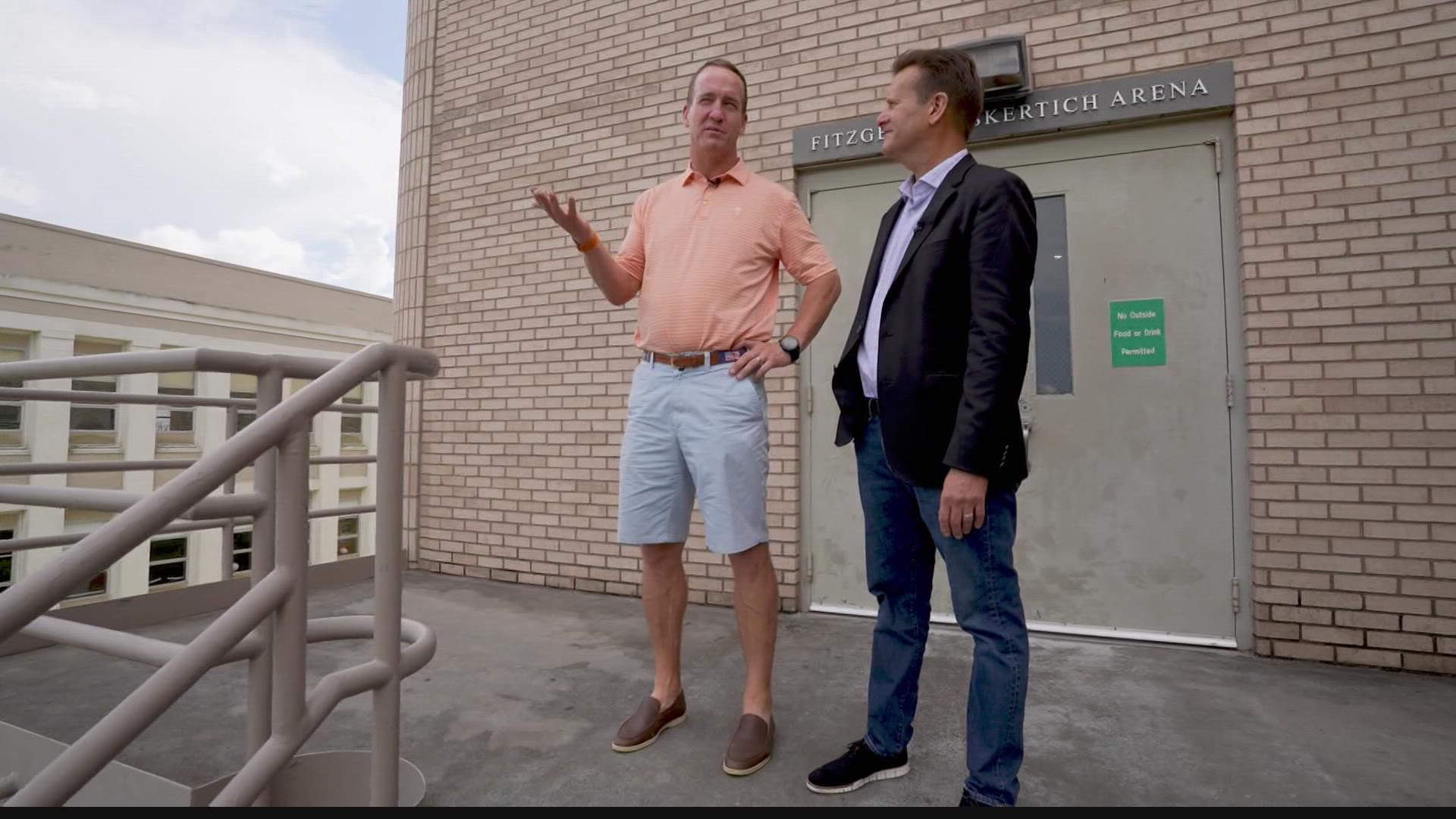 NEW ORLEANS — 13News Sports Director Dave Calabro secured an exclusive interview with Peyton Manning. The former Colts quarterback will be inducted into the Pro Football Hall of Fame Sunday. This is the first in a three part series of interviews. In Part II, Peyton revisits his career with the Indianapolis Colts. In Part III, Peyton talks about his family and shares what's next for him. Calabro also shared his memories of covering Peyton in a special column.

Just a few miles away from the world famous French quarter, tucked away on a quiet street, is Isidore Newman School. This school is where Peyton first chased his dreams along with his older brother, Cooper, and younger brother, Eli.

"See if you can find me!" Manning challenged me. "Right smack in the middle."

"Oh my gosh, how could you miss you?" I said, looking at Peyton's senior class picture.

Newman is a private K-12 school with a history of producing distinguished alumni.

"A lot of people in this picture I went to school with from kindergarten through 12th grade," Peyton said. "I could name everybody in this picture because most of them I have known since I was 5 years old."

We continued to walk the halls when we passed a large plaque for the Distinguished Alumnus/a Award. The wood plaque has three columns of bronze-color plates bearing the names of politicians, doctors, philanthropists and others honored each year. In the top right column is the honoree for 2015: Peyton Manning.

"Oh wow, you are a distinguished alum, Peyton!" I exclaimed.

"It makes you feel old is what that does," Peyton told me as he pointed out other names on the plaque, like authors Walter Isaacson and Michael Lewis. "Yeah, that's a great honor."

We walked by the "senior patio." Peyton said it was the hangout place for seniors, and underclassmen weren't exactly welcomed.

"Don't be coming out there as a junior or a sophomore. Senior Patio," Peyton said, putting extra emphasis on the word "senior." "You can walk through to the library but you better keep moving. If you stopped and loitered at all..."

"You were pretty good, scholarly athlete weren't you?" I asked.

"I had to work at it, I will say that. Cooper kinda could charm his way to a B-plus," Peyton joked. "I was always kind of envious of my friends that didn't have to study, and they just knew the answers. I had to study and had to do the work."

Peyton played basketball and baseball at Newman and learned a lot from his multisport high school career.

"I liked playing other sports," Peyton told me. "I encourage young kids to play other sports, not just specialize. I didn't start playing tackle football until the seventh grade."

We entered the gym, encircled by green and white banners celebrating championships.

"These are all the banners of all the championships—no football, we got close in football," Peyton said as he pointed at the different banners.

"I was on the '91 championship," Peyton remembered. "I used to come in for Cooper, I was the 'sixth man.' I would always get this scowl from him when I would come in for him, like I had done something wrong. 'The coach put me in for you!'"

Peyton followed Cooper not just on the basketball court, but also picked up his legacy on the football field when his older brother had to end his football career for medical reasons. Manning would change his number to Cooper's #18.

We continued our journey through the school to a landing overlooking the football field.

"When I got drafted by the Colts, I asked coach Jim Mora, 'If, it's OK, I would like to wear number 18,'" Peyton explained. "That's kinda my number from high school. Cooper wore it, my dad wore it in college. He goes, 'Sure, no problem.'"

"I said you already have a number 18 on the roster, a guy named Nate Jacquet. Remember that name?" Peyton asked me before continuing his story. "He says, 'Yeah, I don't think he is gonna make the team. You can have it.'"

Peyton laughs and look into the camera, capturing this moment, "So sorry, Nate!"

"Do you remember your first start on this field?" I asked Peyton.

"My very first start as a high school quarterback was on the road, out of town, at a school called Riverside," Peyton said. "We had a scrimmage jamboree here earlier. That was my first game against Carr High School, and they had a defensive back named Patrick Surtain. I played against him in college at Southern Miss, played against him with the Dolphins. His son just got drafted by the Broncos."

Peyton said the scene at this field on Friday nights hasn't changed much.

"My parents would sit up there in the bleachers, the same place they sit now to watch Cooper's two kids play," Peyton said.

Cooper's oldest son, Arch, is a highly recruited quarterback now playing for Newman with his brother, Heid, who is a center on the team.