CALABRO: Peyton turned around the Colts and changed Indy 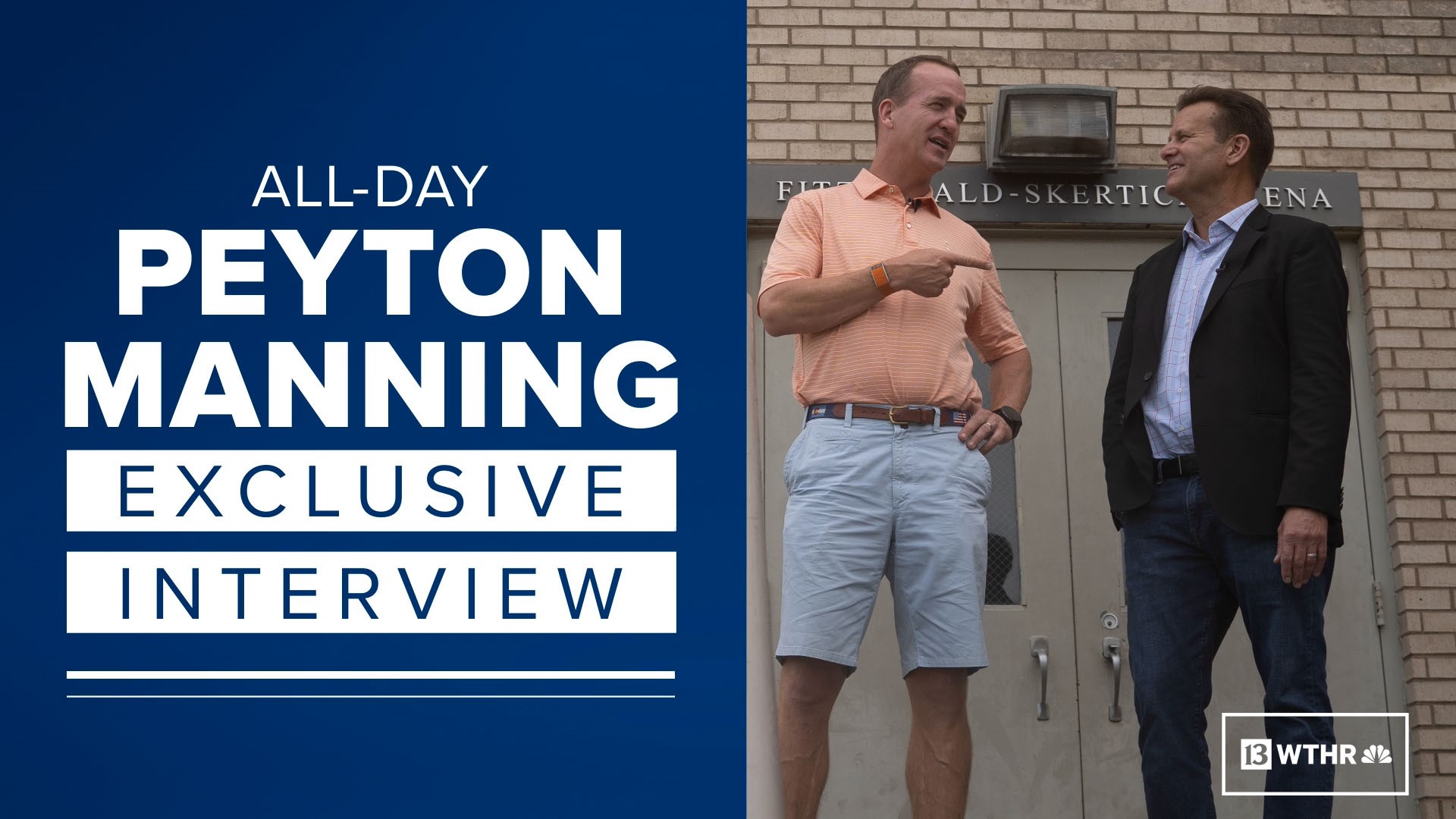 INDIANAPOLIS — 13News Sports Director Dave Calabro secured an exclusive interview with Peyton Manning. The former Colts quarterback will be inducted into the Pro Football Hall of Fame Sunday. In Part I, Peyton tours his high school with Dave and talks about the start of his athletic career. In Part II, Peyton revisits his career with the Indianapolis Colts. In Part III, Peyton talks about his family and shares what's next for him.

When I started covering the Colts in 1992, I saw fans sitting in the stands on the 50 yard line, reading the paper—during games!

The Colts were an afterthought. Indy was a basketball and Indy 500 town. In 1998, the game changed.

The Colts were shopping for a new starting quarterback.

I met Peyton in a hotel lobby during the NFL Combine. I think there were five reporters there.

It's a big change from today because the Combine is covered by hundreds of journalists.

Peyton was well dressed and well prepared. He knew everyone by name after about 20 minutes of casual conversation. He is still Mr. Detail to this day!

Manning showed up at training camp in Anderson and immediately took control of the franchise.

There was no doubt who the leader of this team would be for years to come.

I had asked Peyton to do a weekly segment on Channel 13. He agreed. After each game, we would meet on the field or locker room for an interview.

That first season was long. The Colts won just three games that season.

Those weekly interviews were awkward for me. I am a journalist and asking tough questions, that’s my job. I was on the "13 Sports Jam" one Sunday night with former Colts QB Jack Trudeau. We grilled Manning for his horrible play.

Peyton told me, years later, he had watched the report and said he respected me for being honest. He handled all of it well.

I watched him struggle to beat Tom Brady early on. But you could tell Manning was coming of age.

He finally got over that mountain with that 2006 AFC Championship game.

It was so much fun to see the old RCA Dome go crazy.

Peyton was in the middle of the field just beaming with pride. Indy was becoming a football town!

The 2007 Super Bowl was another one of my all-time favorite moments. I watched the fourth quarter in a downpour from the sidelines. I ran on the field as they won. Peyton ran past me screaming, "How about them Colts, Dave! World champions!"

That was totally out of character for #18!

Manning turned Indy around. I don’t think Lucas Oil Stadium or Indy hosting a Super Bowl would have become reality, if it weren’t for Manning. He led that charge on and off the field.

I went to New York when Peyton hosted "Saturday Night Live." I watched two rehearsals and the live show.

We were told by the producer of the show we could only interview Peyton if we also agreed to interview some new singer named Carrie Underwood!

Talk about a fun weekend with Manning. At rehearsal, Peyton knew all his lines and everyone else’s too!

In 2003, Peyton led the Colts back from a 21 point, second half deficit in Tampa Bay on Monday Night Football.

I was not there, but I did camp out at the airport until 4 a.m. when the team arrived home.

Peyton laughed when he saw me in the parking lot and gave me a great interview.

He looked at me and said, "Well, of course you are here!"

In 2011, Manning underwent neck surgeries, and I got a call that the Colts were thinking of releasing him.

Jim Irsay had flown to meet Peyton at a secret location to talk about his future.

I went back to the airport and literally waited for hours in the parking lot until the owner and Peyton stepped off the plane. Irsay drove over with Peyton riding shotgun to do an interview. I don’t think Manning was too happy about that one!

Manning was always giving back to our community. He routinely would show up at local hospitals to just brighten someone's day.

It didn’t surprise me when the Peyton Manning Children's Hospital became reality.

I was able to spend a July afternoon with him this summer in New Orleans. He beamed about his kids, coaching little league and his future.

Manning is retired from playing, but he’s not done making an impact with his fame. He didn’t rule out owning a team or getting into politics some day.

I’m proud to call him a friend, especially now that I don’t have to ask him about throwing some interception.