U.S. government buys millions of wrong masks, then auctions them away for pennies apiece

The Department of Homeland Security purchased the masks for $1,968,800, so the sale represents a net loss of about approximately $1.6 million for taxpayers. 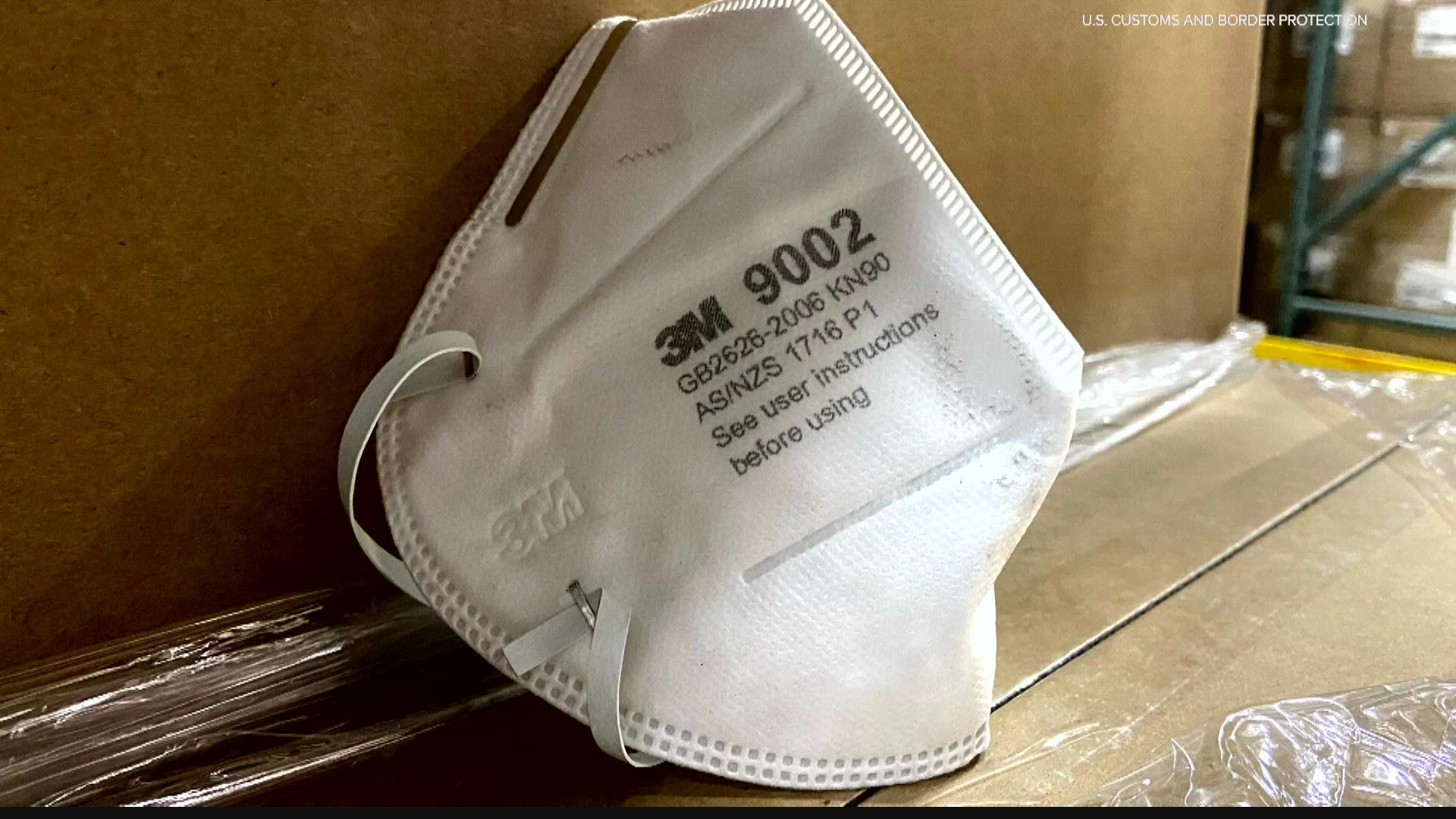 INDIANAPOLIS — As COVID-19 cases surge and the CDC announced many Americans should once again wear protective masks indoors, 13 Investigates has discovered another government agency is getting rid of millions of masks it recently purchased.

The KN90 and KN95 respirators – more than 11,000 boxes of them paid for by American taxpayers – have been sitting in a warehouse located on the northwest side of Indianapolis, and federal officials tell 13News the masks were never needed.

Government watchdogs question both the purchase and the auction.

Last September, when many government agencies and health care facilities were still searching for respirators to protect their workers against COVID-19, Customs and Border Protection asked its parent agency, the Department of Homeland Security, to purchase millions of additional masks.

U.S. Customs and Border agents wanted N95 respirators, considered the gold-standard of protective face masks, because of the high level of protection they offer against air-borne particles such as viruses.

But CBP did not get the type of masks it asked for.

“We put out that we needed N90 and N95 masks, but something must have been lost in that transmission. The Department of Homeland Security placed the order, and what we received were actually KN90 and KN95 masks,” said CBP public affairs officer Steve Bansbach. “It is important to note that CBP did not request these.”

When it comes to protective face coverings, small details can make a big difference, according to health care experts.

To explain the difference between N95 and KN95 respirators, 13News consulted with ECRI, an independent, nonprofit organization that conducts independent medical device evaluations for the health care industry.

“On paper, they are very, very similar. But their performance can be quite different,” explained Chris Lavanchy, the engineering director for ECRI’s device evaluation group.

Both the N95 and KN95 masks are designed to fit snugly over your nose and mouth and are supposed to filter out 95% of tiny particles that could otherwise be inhaled into your lungs. That is what the 95 in the title represents. (N90 and KN90 respirators are supposed to filter 90% of harmful particles.) They are the preferred face covering in health care settings and other environments where workers are at high risk for coming into contact with people infected with COVID-19.

The only major difference between the particulate-filtering respirators is that N95 masks conform to the American safety standard, meaning they have been tested and approved by the CDC’s National Institute for Occupational Safety and Health; KN95 masks get their approval verification from China and may not meet rigorous NIOSH testing standards.

ECRI conducted tests on dozens of KN95 masks last fall, revealing the difference between N95 and KN95 respirators can be very significant.

“What we found was about 60% of the KN95s did not meet the requirements for filtration that the N95 does,” said Lavanchy. “Rather than seeing 95% [of particles] or greater being filtered by the respirator, we were actually seeing some that might filter only 30%. Clearly if you’re interested in respiratory protection, that’s a concern. You wouldn’t want to use something that allows that many more particles to get through.”

ECRI issued an alert last fall after its testing. The CDC, which previously loosened its recommendations that health care facilities and some government agencies use only NIOSH-approved (N95) masks due to severe shortages of N95 respirators, announced this May that those facilities and agencies should return to normal practices. It means government agencies that rely on N95 masks should use KN95 respirators only as a back-up if and when their supplies of N95 masks are fully depleted.

Bansbach said CBP has been able to find plenty of N95 masks for its staff and, therefore, never used the millions of KN95 and KN90 masks sitting in the Indianapolis warehouse.

“We still have a bountiful supply of the correct masks, so we made the decision we should auction them off instead of them sitting in a warehouse collecting dust,” he told 13News. “Protocol doesn’t allow us to use those.”

13 Investigates was alerted that the masks were being auctioned on the federal government’s General Services Administration online auction website just a few minutes before the auction was scheduled to end.

The sale concluded at 10:20 pm (EST) with a winning bid of $351,116 – far less than the Department of Homeland Security paid for the respirators just 10 months earlier.

According to Bansbach, DHS purchased the masks for $1,968,800, so the sale represents a net loss of about approximately $1.6 million for taxpayers.

13 Investigates went to the CBP’s Indianapolis warehouse to see the masks. A worker allowed 13News into the warehouse, but a supervisor would not permit us to see the 11,000+ boxes of respirators without approval from the agency’s public affairs office. CBP public affairs denied 13News’ request, but did provide some photos of the auctioned safety equipment.

So how did the federal government buy millions of masks it couldn’t use?

“It’s hard to say for sure,” Bansbach told 13News, reiterating that the agency specifically requested N95 respirators rather than the KN95 masks it received. “Somebody may have read it too fast or they thought the KN and N masks are the same thing and they’re not…I think it is just human error, simple mistake”

The mistake, which comes at taxpayer expense, is cause for concern for government watchdogs like Sean Moulton, a senior policy analyst at the Project on Government Oversight, an independent, non-partisan organization that investigates government waste.

“Early on, everyone was learning the difference between an N95 and a KN95 mask. But I would have thought by the fall, most procurement officers responsible for PPE [personal protective equipment] would know the difference. I’m not sure how, at that late stage, a procurement officer could make that significant of a mistake,” Moulton said. “It makes me wonder how many procurements took place like this one that we don’t yet know about.”

A report published by ProPublica in June 2020 showed at least 11 other federal agencies signed contracts worth millions of dollars to purchase KN95 masks, despite not knowing the level of filtration protection those masks offered. The DHS purchase for its U.S. Customs and Border Protection workers came three months later, and CBP confirms the federal agency “did not send these out for evaluation prior to auctioning.”

Credit: U.S. Customs and Border Protection
KN90 masks at the Indianapolis CBP warehouse that were auctioned off.

That, too, is a problem, according to Moulton, who says the KN95 masks are still valuable for federal workers.

“The expectation is federal workers are going to continue to need these types of masks – even the KN95 masks – and we’re going to see more states, more counties, more institutions return to wearing masks, and mask demands are going to go up, so I don’t quite understand it,” he said. “I think they could have found a lot of other takers out there if they had been willing to hold onto them a little longer. So the procurement doesn’t make sense, and the auction quite frankly doesn’t make sense either.”

Lavanchy, the ECRI engineer who found many KN95 masks fall far short of U.S. testing standards, confirmed some Chinese-certified KN95 masks tested by his organization did meet high filtration standards established by the U.S. government. And he said even those that did not meet the N95 standard may still provide superior protection against COVID-19 compared to wearing loose-fitting surgical or cloth masks.

“For those not in the health care field and if it’s just a civilian walking around who’s interested in protecting themselves, KN95s are fine. In fact, I wear KN95s when I go out to stores and things like that because I know they work pretty well,” Lavanchy said.

Some masks given away for free

U.S. Customs and Border Protection also realized the respirator masks are still valuable -- just not valuable to them.

The federal agency gave away about 250,000 of the respirators in early and mid-July. The FBI asked for 192,000 of the masks and another 64,000 were shipped to the Charleston (IL) Fire Department, according to Bansbach, who said CBP provided the masks to those agencies at no charge other than the cost of shipping.

“Obviously, those just sitting there isn’t doing anyone any good,” he said, adding that CBP wanted to get rid of the masks before their expiration date in spring 2025. “We’re very happy somebody’s going to be able to use them for the correct purpose.” 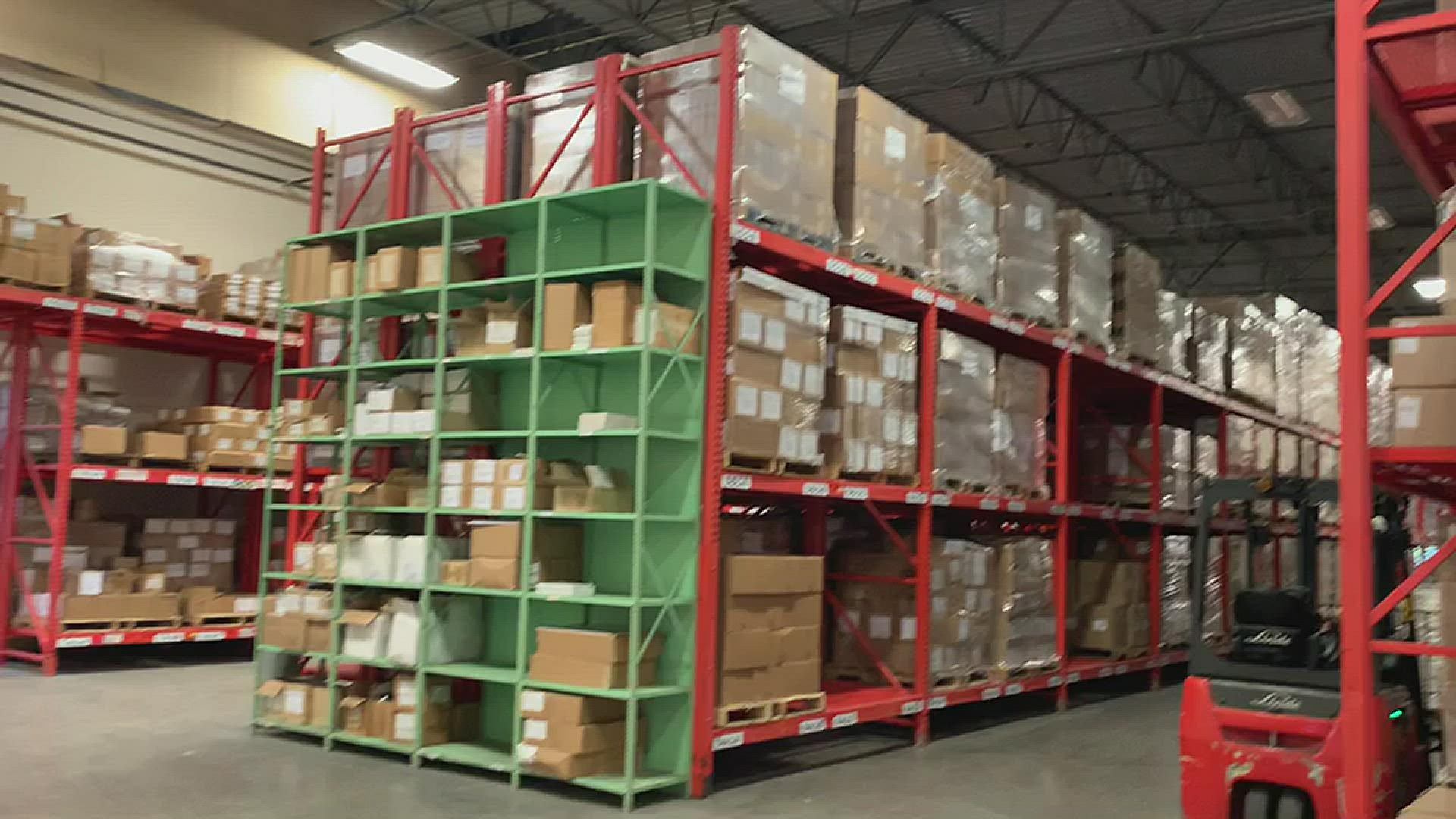 Who is that winning bidder, the new owner of more than 5.6 million masks?

CBP has not released that information. The agency instead referred 13 Investigates to the General Services Administration, which operates the government auctions.

GSA has not released the bidder’s name either, requiring 13News to submit a Freedom of Information Act request, which can take weeks to years for a government agency to fulfill, if it chooses to release the information at all.

What we do know about the winning bidder is they got a heck of a deal: securing more than 5.6 million respirators from the US government at about six cents each just four days before the CDC recommended millions of Americans once again wear masks to help curb the spread of COVID-19.

“It just raises so many questions. Taxpayers paid $2 million for the masks, and now they’re essentially being given away for pennies,” Moulton said. “I’m so surprised they wouldn’t have figured out a way to hold onto them and put them to use.”