The alcohol sensing technology is designed to detect blood alcohol levels by sampling the air or examining the driver's finger when starting the ignition. 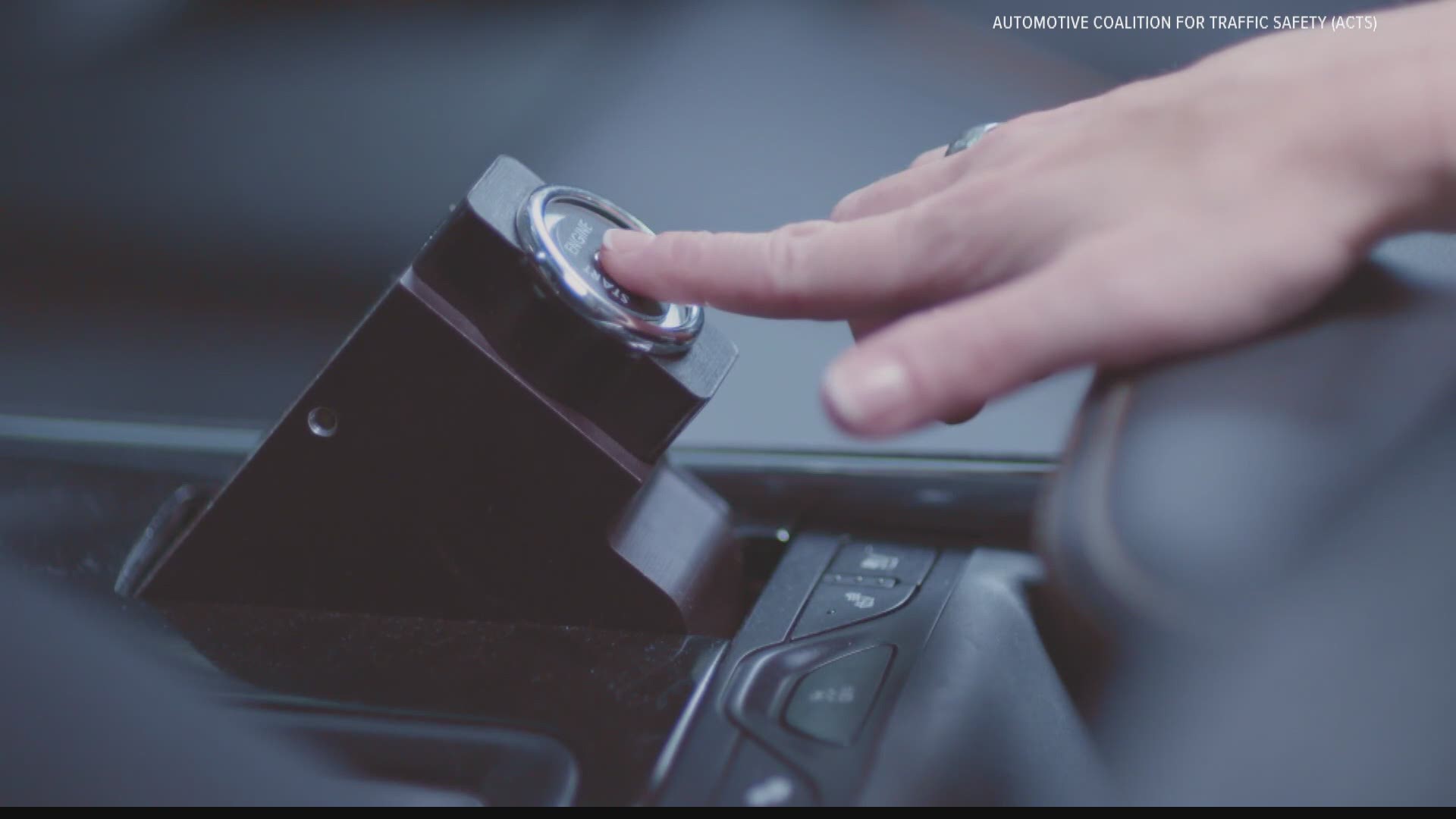 INDIANAPOLIS — Researchers say they've figured out a way to practically eliminate drunk driving. They have developed alcohol detection sensors that will be soon be launched on American roads for the first time. And within a few years, the technology could be ready to install in the vehicles of millions of American drivers.

But are American drivers ready for the technology?

The question is now taking on new urgency as program developers prepare to license the sensors and Congress considers legislation that could make alcohol prevention technology mandatory in all new cars and trucks.

The potential impact of these sensors would be dramatic, with thousands of lives and billions of dollars at stake.

Out of the laboratory. Onto the highway.

13News was among the first media outlets in the nation allowed inside the Boston-area lab where scientists are developing the Driver Alcohol Detection System for Safety, better known as DADSS. It’s where researchers have been teaching cars how to detect if a driver is legally drunk by using embedded sensors that measure a driver’s blood alcohol level. If that level is above a certain threshold, the car won’t start.

DADSS engineers are developing two different types of technology. The first captures your breath and pulls it into a sensor, where a beam of infrared light then calculates your precise blood alcohol concentration.

The second technology features a touch-based system built into a car's ignition button or gear shift. It uses tiny lasers to shine a beam of light onto your finger, and that special light reads the alcohol level below your skin's surface.

Unlike an ignition interlock system, which some courts mandate for convicted drunk drivers, the DADSS system does not require a driver to take specific actions. The system is designed to quietly and unobtrusively collect measurements.

“The challenge that we have is to measure alcohol content or blood alcohol concentration very accurately, very precisely and very fast,” explained Bud Zaouk, a DADSS program manager who gave 13News a behind-the-scenes tour of the research lab in 2015. “You have to do the measurement, the reading, and decision whether this person can move the vehicle or not move the vehicle very quickly. Our goal is less than half a second, 325 milliseconds to be specific -- less than the blink of an eye. The idea here is we do not want to inconvenience the driver.”

The above video is a promotional video from Automotive Coalition for Traffic Safety demonstrates how the DADSS system works.

Since WTHR’s visit six years ago, researchers have been making the sensors smaller and more accurate. The technology, which has been in development for more than a decade, has now advanced to the point where it can soon be licensed for installation into commercial fleet vehicles. Later this year, trucking, bus and taxi companies will be able to use DADSS sensors in their vehicles to ensure their drivers are alcohol-free on the job.

“It’s a big deal because it’s the final corner we need to round towards ultimately being able to offer this technology to all consumers,” explained Rob Strassburger, president of the Automotive Coalition for Traffic Safety (ACTS), a non-profit group that’s been developing the system along with the auto industry.

He said the group’s ultimate goal is to get the alcohol sensors into passenger cars within the next three years – and eventually into every vehicle produced to hopefully eliminate drunk driving deaths within our lifetime.

“That’s our biggest traffic safety problem and it’s eminently preventable,” Strassburger told 13News. “Our mission is to see the DADSS technology deployed as widely as possible as quickly as possible.”

Credit: WTHR
Pam Kelshaw holds a photo of her daughter, Silina, who was killed 19 years ago by a drunk driver.

The Automotive Coalition for Traffic Safety has a large backing of supporters for its alcohol sensors. The National Highway Traffic Safety Administration has already spent about $50 million to help fund DADSS research, with 16 of the world’s largest automakers (including GM, Ford, Toyota, Honda, BMW and others) contributing another $50 million.

The type of technology developed by the DADSS program has also garnered support from many victims of drunk driving, who’ve expressed optimism that the alcohol sensors will significantly reduce the number of drunk driving fatalities that still plague communities every day. The United States records approximately 10,000 drunk driving deaths every year.

“It changes your life forever. It’s like waking up every day to your worst nightmare,” said Pam Kelshaw, who still vividly remembers the phone call she received 19 years ago to inform her that her family had been in a terrible crash.

Kelshaw’s family was returning from a shopping trip when another driver ran a stop sign near Noblesville High School. That driver, who was zooming through a school zone at more than 100 mph, crashed into the back of the family’s minivan. Kelshaw’s husband and son survived, but her 17-year-old daughter, Silina, died from massive injuries. Police discovered the speeding driver had also been drinking.

Kelshaw, who serves as the Indiana state director for Mothers Against Drunk Driving, believes more needs to be done to prevent these types of crashes and fatalities. MADD’s national president says technological advancements to reduce impaired driving are long overdue, and she hopes the federal government will mandate some type of technology in the near future.

Strassburger says ACTS has already been in contact with several companies that plan to license DADSS sensors in their fleet vehicles by the end of 2021.

But not everyone seems excited about mandated alcohol sensors in vehicles. Trade associations that represent trucking and rental car companies, two of the industries that can begin installing DADSS sensors later this year, told 13News they have heard little feedback from their members about the possibility of installing the new technology.

“A lot of our companies walk a very fine line about Big Brother watching [their drivers],” said Barbara Smithers, vice president of the Indiana Motor Truck Association, which advocates for the state’s trucking companies. “It would be hard for me to imagine a carrier would want to install this in all of their vehicles proactively, especially if they haven’t had any issues with their drivers.”

When contacted by WTHR, the American Car Rental Association did not have any comment on alcohol sensors in rental cars, although a spokesman did say “anything that makes renting a car safer for ACRA’s renters and the other motorists on the road is a good development.”

Some trade groups, such as the American Beverage Institute, have been outspoken critics of the DADSS program.

ABI, which promotes itself as a restaurant trade association dedicated to the protection of responsible on-premise consumption of adult beverages, says DADSS sensors are “unlikely to work perfectly,” resulting in drunk drivers still operating vehicles and sober drivers getting stranded. The organization questions whether alcohol detection sensors will be programmed to prohibit drinkers from operating a vehicle even when they are not legally intoxicated with a .08 blood alcohol concentration, “making it hard for most drivers to have a single drink before driving,” according to the ABI website.

Pam Kelshaw doesn’t buy that. The drunk driver who crashed into her family and killed her daughter had a BAC under the .08% legal limit.

“If you’re not drinking and driving, you don’t have a problem,” Kelshaw said. “It’s not an inconvenience. It’s helping save lives. We have to do something to stop this.”

Should alcohol sensors be mandatory in all vehicles?

DADSS developers envision a steady progression that will make alcohol detection sensors more widely available over the coming decade. Providing the technology to companies that are eager to install the sensors into their fleets is the next step in that progression.

After that, DADSS sensors could be an optional piece of safety equipment offered by automakers looking to appeal to safety-conscious consumers. Appealing to parents who’d like a vehicle that won’t start if their teenage driver is under the influence of alcohol could be an attractive marketing pitch.

But some lawmakers believe the technology is too important to be considered optional.

Congress is considering two separate bills – the RIDE Act and HALT Act – that would both promote further development of advanced alcohol and impaired driving detection technology and mandate automakers to install that technology in new vehicles. Both have attracted bi-partisan support but face uphill battles in an increasingly partisan and divided Congress.

Supporters of the bills say utilizing technology to prevent drunk driving deaths is no different than mandating seat belts or airbags. And the Insurance Institute for Highway Safety released a 2020 study that found drunk driving prevention technologies could prevent more than 9,400 drunk driving deaths annually if made standard on all new vehicles.

“It is heartbreaking that we have lost so many to the irresponsible actions of drunk drivers, and it’s time to take real, significant action to prevent any further loss,” Sen. Rick Scott (R-Fla.) said earlier this year when he re-introduced the RIDE Act in the Senate.

“We support any kind of technological advancements that will lead to an end to drunk driving,” she told 13News. “It is 100% preventable and 100% avoidable.”