A 13News review of auction websites shows government agencies auctioned tens of thousands of N95 face masks and other personal protective equipment (PPE) – the same types of PPE that federal agencies are now purchasing to restock a depleted national stockpile. 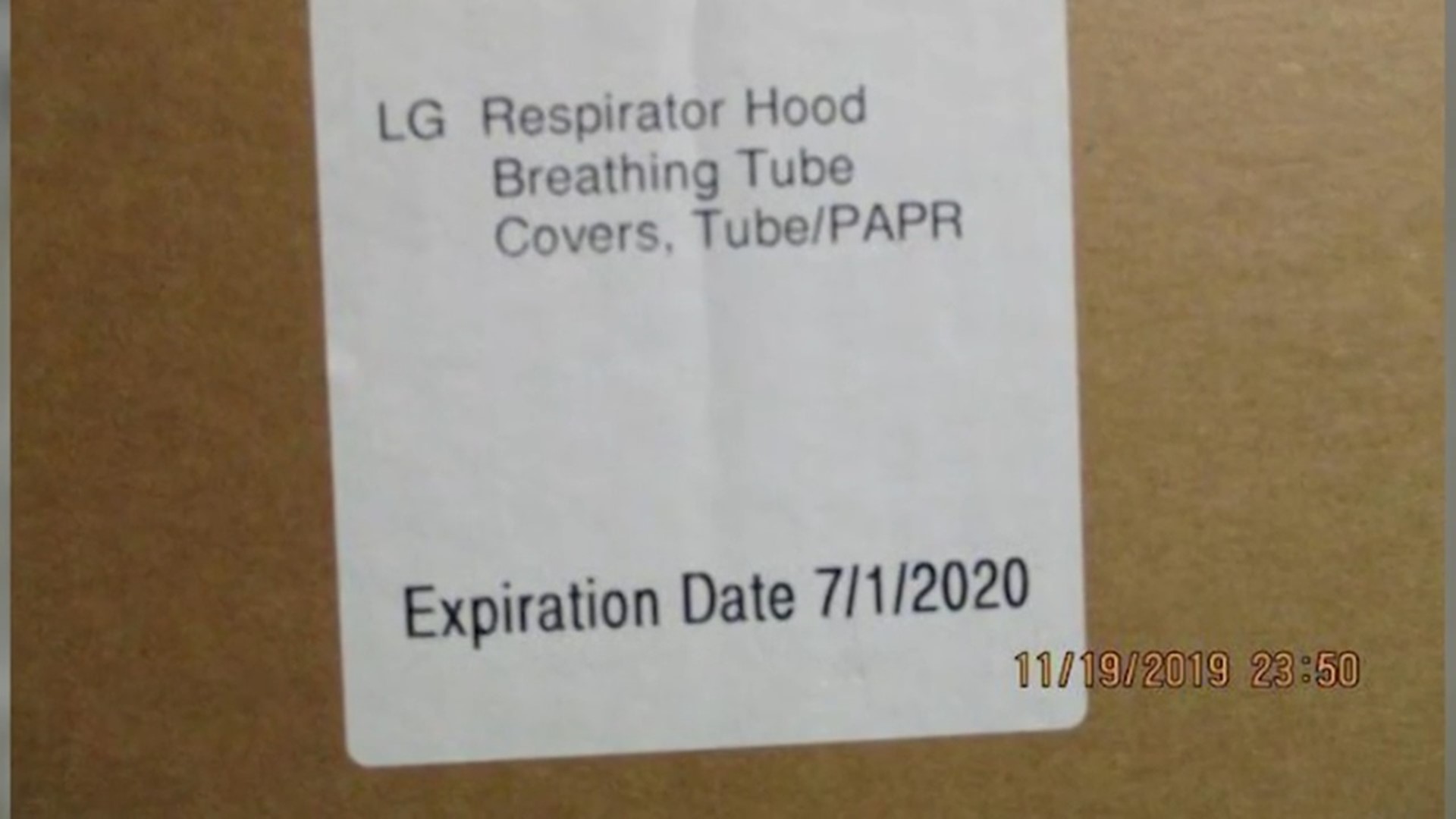 INDIANAPOLIS (WTHR) — As hospitals scramble to find protective equipment that doctors and nurses need to fight a global crisis, 13 Investigates has learned the federal government actually sold off some of those supplies in the months leading up to the pandemic.

A 13News review of auction websites shows government agencies auctioned tens of thousands of N95 face masks and other personal protective equipment (PPE) – the same types of PPE that federal agencies are now purchasing to restock a depleted national stockpile. The auctions raise questions about how the federal government coordinated its response to COVID-19, and whether it shared critical information with an agency that oversees surplus supplies that can be utilized during emergencies.

The General Services Administration is a massive agency that purchases billions of dollars in products and services for the federal government. It also helps get rid of surplus, unwanted assets and materials. Federal agencies and state governments get to claim unwanted items first. If they are not interested, the GSA then offers items to the highest bidder through public auctions.

13 Investigates inspected the GSA’s auction website and found several auctions that closed in recent months included PPE that hospitals have been desperately seeking to protect their medical staffs from COVID-19.

The Department of Veterans Affairs Northern Indiana Healthcare System auctioned over 100 PPE kits in mid-January. The auction listing shows the kits included N95 masks, gloves, gowns, hoods, face shields and PAPRs (powered air purifying respirators) that are in high demand by respiratory therapists, doctors and other front line health care workers. The kits had approaching expiration dates, but photos on the GSA auction site show the safety equipment did not expire until June 2020. The VA Hospital in Marion, Ind., chose to sell the kits anyway. An anonymous bidder won the auction with a bid of $2,010.

In Denver, the General Services Administration has been auctioning hundreds of cases of surplus N95 masks.

In November, when the GSA auctioned 160 more cases (25,600 masks), the price was relatively stable at 31 cents per mask.

The GSA told 13 Investigates it decided to cancel its final sale in late February after the auction closed on February 29, retaining the N95 masks and sending them to the Centers for Disease Control and the Department of Homeland Security. And it says the early-February auction took place “prior to the declaration of a crisis in the U.S.” and before the agency knew the N95 masks in question – a model of N95 mask commonly used by construction workers – were also considered acceptable for use in medical settings.

The PPE auctioned in Denver and Marion account for just a tiny fraction of the safety equipment needed by front line medical workers who are treating patients with COVID-19. But government watchdogs say the they show a disorganized effort and delayed response by federal agencies to coordinate resources as the pandemic approached.

“It’s the old case of ‘Does the right hand know what the left hand is doing when it comes to the federal government?’” said Scott Amey, general counsel of Project On Government Oversight, a government watchdog organization that investigates federal waste. “The rising prices should have been a red flag when people started bidding five, six, seven times higher for these supplies than they were a few months ago. But they were still conducting auctions in early February and in late February, weeks after the CDC came out with advice and this was a pandemic that was potentially spreading to the U.S.”

“I think there should be a review of what GSA knew at the time and how it was handling the crisis.”

The CDC confirmed the first case of COVID-19 in the United States on January 20, four days before the Marion VA closed its auction. A week later, CDC director Dr. Robert Redfield wrote the virus posed “a very serious public health threat” in an email to colleagues obtained by Propublica. By late February, the White House requested $2.5 billion to deal with the emerging coronavirus emergency. At the same time, the GSA was still conducting PPE auctions.

Several GSA sources who spoke to 13News on the condition of anonymity, because they are not authorized to discuss auctions with the media, said they were personally unaware that auctioned PPE would soon be needed due to a spreading pandemic in the United States.

“It would be very interesting to find out exactly what GSA knew at the time and why they allowed auctions to still go off. The CDC seemed to know about the threat, but was anybody inside GSA questioning these auctions and asking questions about whether it’s a good idea to auction off material that could even possibly be used in the coronavirus fight?” Amey said. “Until we know some of those answers, it will be difficult to tell if GSA was telling the truth or whether they’re hiding behind the fact they weren’t really prepared and they let materials that could have helped go out the door. I think there should be a review of what GSA knew at the time and how it was handling the crisis.”

Asked about the auction of PPE kits from the VA Medical Center in Marion, a spokeswoman for the VA Northern Indiana Healthcare System told 13 Investigates the VA “decided to sell a small amount of excess equipment that was procured to be used for Ebola treatment and not typically used for COVID-19.”

When 13News pointed out all the items listed in the kits are used for COVID-19 response, the spokeswoman then offered a different story.

“We didn’t auction off PPE kits. We auctioned off a small number of items from the kits,” said VANIHS public information officer Alex Sharpe, adding “Prior to selling these items that were originally found in the kits, we took out essential COVID-19 PPE.”

But the GSA auction site offers no disclaimers to indicate VA officials removed any PPE items from the auctioned kits – let alone the vast majority of the items as Sharpe suggested in her statement to 13News. And the VA statement is contradictory to information provided by the GSA, which indicated that government officials could not have known in January and early February that PPE items would need to be retained to help protect health care workers from COVID-19.

The VA did confirm for 13 Investigates that it auctioned PAPRs, stating those devices are “non-essential” for treating coronavirus. Nurses on the front lines of the coronavirus battle disagree.

“You do need the PAPRs, the powered air purifying respirators,” said Jean Ross, a registered nurse and co-president of National Nurses United, one of the nation’s largest nurse’s unions. She says everything that was listed and auctioned by the Northern Indiana VA in January is critical safety equipment now needed by health care workers.

“Absolutely. Those are the types of things we’ve been asking for – begging for. Getting rid of them is very shortsighted and certainly not having a care for those of us that work at the bedside,” she said.

The General Services Administration says it is no longer auctioning off any medical supplies needed to fight coronavirus, and all N95 masks that GSA had in its stockpile have been transferred to agencies that need them.

Statement from the General Services Administration

For the Denver auctions:

It is important to note that the N95 masks that were auctioned by GSA are the Cat# 8210 type which is designed for use for particles such as those from grinding, sanding, sweeping, sawing, bagging, or other dusty operations. These are different from the Cat# 1860 type which are cleared by the FDA for use as surgical masks that aid in the protection against certain airborne biological particles. Both masks provide 95% filtration efficiency. This respirator can also help reduce inhalation exposures to certain airborne biological particles (examples: mold, Bacillus anthracis, Mycobacterium tuberculosis), but cannot eliminate the risk of contracting infection, illness, or disease. That information can be found here. It was not identified until after this sale that the model #8210 could be substituted for the surgical/medical grade N95 model #1860 by the CDC and NIOSH.

In November 2019, VA Northern Indiana Health Care System (VANIHCS) decided to sell a small amount of excess equipment that was procured to be used for Ebola treatment and not typically used for COVID-19. The final sale of items was completed in January 2020.

Northern Indiana Health Care System is equipped with essential items and supplies to handle an influx of coronavirus cases, and we are continually monitoring the status of those items to ensure a robust supply chain.