Mundell and Associates groundwater models show potential contamination from the Amphenol site might have spread outside Hurricane Creek and East King Street. 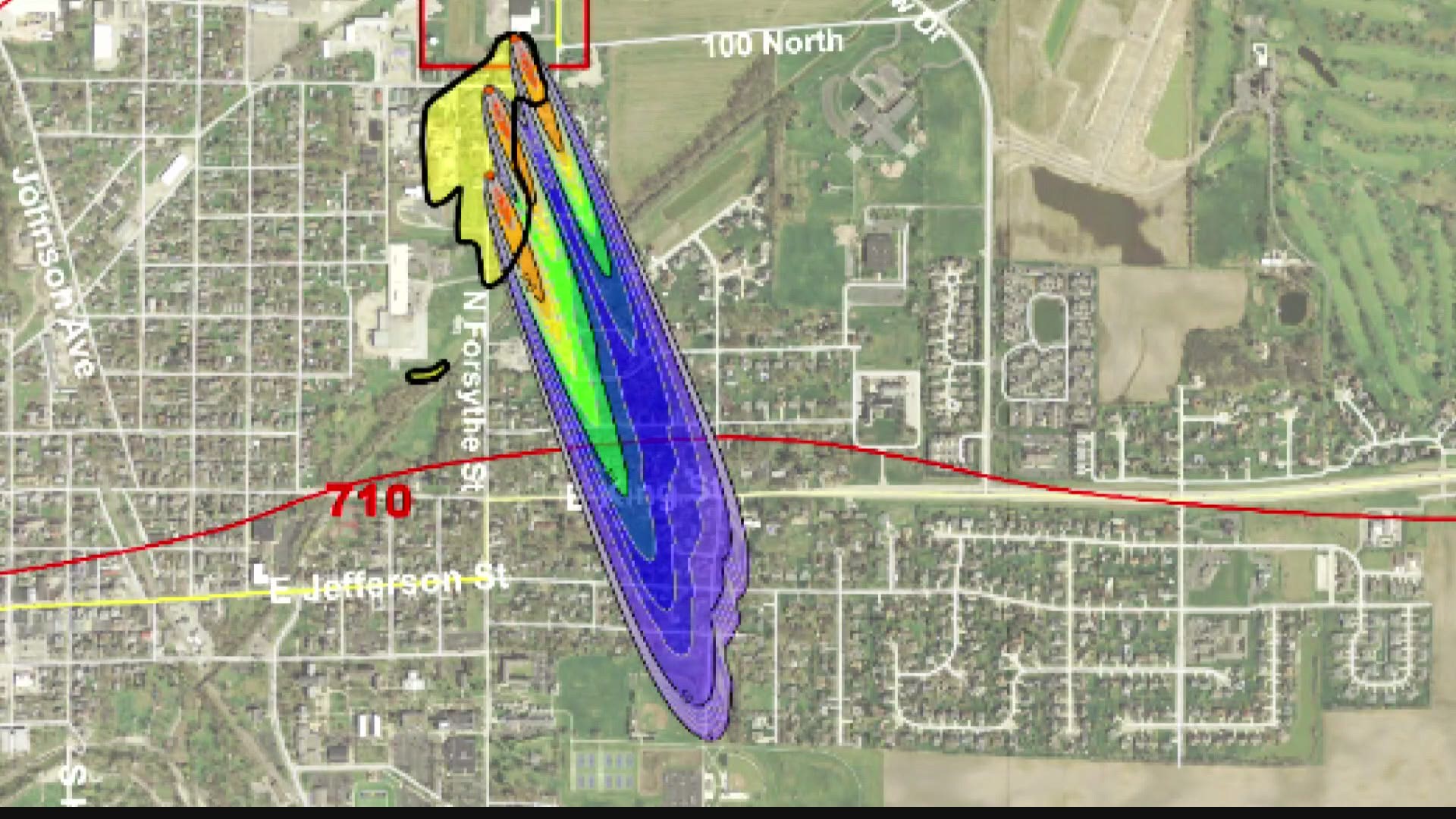 FRANKLIN, Indiana — A new study of potential contamination in Franklin, Indiana suggests additional testing needs to be done to check if dangerous chemicals have spread beyond areas originally tested.

Mundell & Associates, an environmental consulting firm, created a groundwater plume model to suggest where contamination from the former site of the Amphenol Corporation plant may have spread.

"We're just trying to close the data gaps. Once those data gaps are closed, people can have a greater confidence that the situation that they've found out there has been delineated that it's been going to be properly remediated and that everyone can feel more at ease," said John Mundell, Mundell & Associates president.

The model analyzed potential movement of contaminated water between 1963 and 2018, a period of 55 years.

The concern is with potential high levels of Trichloroethylene (TCE). The chemical compound is used as an industrial solvent. Trichloroethylene is a known carcinogen and can cause other health issues if someone is exposed to high concentrations.

Mundell & Associates groundwater models show potential contamination from the Amphenol site might have spread outside Hurricane Creek and East King Street. The next step is to take actual samples to see if contamination exists in other areas.

"What we don't want to happen is 10, 20 years down the line, when these families' children or their grandchildren are living in Franklin, for all of a sudden them have to turn up to EPA meetings again, because more contamination is found. We want this to be resolved once and for all," said Shannon Lisa, environmental health advocate.

The group "If It Was Your Child" funded the study and counts 78 cases of childhood cancers connected to the Franklin area in the past 13 years. Kari Rhinehart's daughter Emma Grace died from glioblastoma in 2014 at just 13 years old.

"We just want people to be aware that this is not over. This is a marathon, and we're pretty good runners, so we're just going to keep chugging along," said Kari Rhinehart, If It Was Your Child co-founder.

The former Amphenol Corporation facility is about 15 acres, located at 980 Hurricane Road. From the 1960s through the 1980s, the site was used to make electrical parts. The investigation and cleanup of the site is being overseen by the U.S. Environmental Protection Agency, which has previously said it was focused on a number of chemicals used there.

13 Investigates has been covering contamination concerns in Franklin since 2015. 13 Investigates discovered that, in recent years, nearly half of the children diagnosed with cancer in all of Johnson County lived in Franklin.

The series of reports, called "Desperate For Answers" also first alerted the community of Franklin to spreading TCE contamination.

In 2015, responding to a 13 Investigates report, state health officials told parents in Johnson County there was no "cancer cluster" in the county making their children sick.

In 2019, the Environmental Protection Agency (EPA)  took steps to neutralize cancer-causing toxins like TCE in two test locations near the old Amphenol site, where toxins had migrated from the property and into a nearby neighborhood.

Also, in late 2019, about 1,298 feet of sewer lines south of the Amphenol plant, along South Forsythe Street were replaced. The soil around those lines was also removed.

The EPA said a 2020 pilot study in Franklin reduced levels of toxic chemicals in the groundwater at two sites near the Amphenol plant. Lab results showed no detections of TCE at one of those sites, near Hamilton Avenue, while smaller amounts were found in a trench along North Forsythe Street. Sewer lines were also replaced on Forsythe, making it unclear whether the treatment or the new lines actually led to the decrease of volatile organic chemicals.

In October 2020, the EPA said it would continue to study the area and devise a community-wide cleanup plan for several contaminated sites.