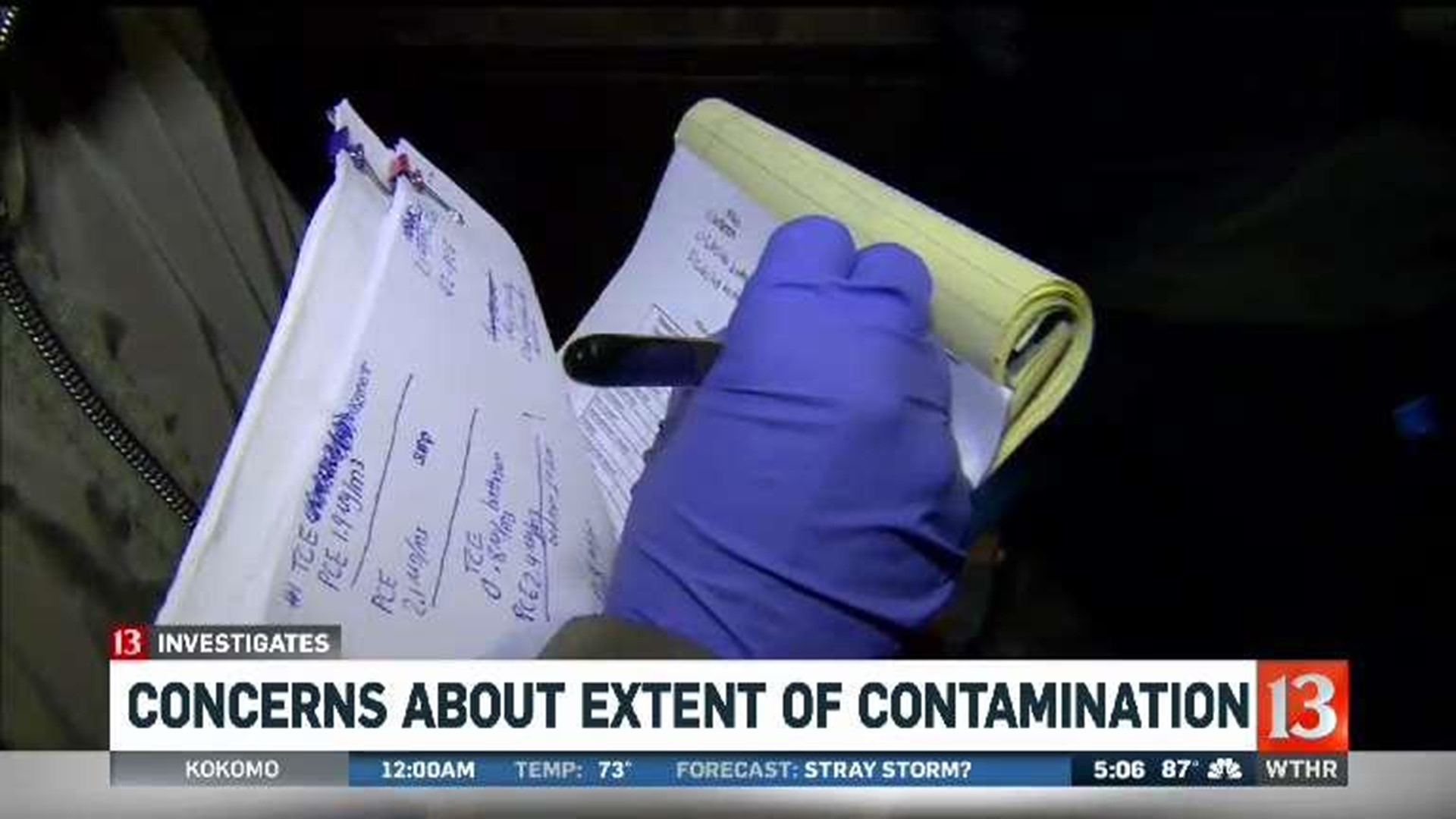 The Edison Wetlands Association (EWA) says it happened because the EPA only used one testing method. 13 Investigates reports why mothers of sick children want widespread testing.

Around the clock monitoring using canisters and "real time" grab samples is now calling into question the potential extent of toxic contamination in homes in Franklin.

In a new 70-page report by Mundell and Associates, chemical "spikes" were detected in hundreds of samples from both sewers and homes. Spikes that the EWA believes could leave more residents than previously identified, at risk.

"It highlights the fact that there may be key exposures in Franklin homes that have been missed both by the current sampling methods alone, but also the current scope of the sampling," said Shannon Lisa, Project Manager at EWA.

According to Lisa, some of the homes discovered with consistent high levels of Trichloroethylene (TCE) over Indiana's indoor screening levels were previously found non-detect by the EPA. The federal agency only used summa canisters for its testing, while EWA used canisters and "real time" grab technology.

13 Investigates was on site back in February when EWA and Mundell brought that technology and a mobile lab to test 30-homes. Approximately 10 homes where grab samples were taken had detectable levels of TCE over the indoor air reporting limit.

Five of those homes also got continuous monitoring using grab samples, canisters and other sample methods.

One of the homes highlighted in the report is in Heritage Trails. That home is located in a neighborhood outside the EPA's investigation zone.

According to the EWA, even repeat testing found troubling results.

"Consistently high or exceeding levels of TCE were found especially in that main bedroom sample," explained Shannon Lisa, who says the EPA should respond urgently to the findings.

"There are homes north of the site that extend either way that have been contaminated," said Stacie Davidson who along with Kari Rhinehart co-founded the group “If It Was Your Child.”

The mothers first brought their concerns about high pediatric cancer rates to 13 Investigates in 2015.

13 Investigates discovered nearly half of the children diagnosed with cancer in all of Johnson County lived in Franklin.

The series of reports called, "Desperate For Answers" also first alerted the community of Franklin to spreading TCE contamination.

In June of 2018, EWA conducted the first round of vapor intrusion testing in the city. The mothers have been calling on the EPA for widespread testing since then.

Rhinehart, who lost her daughter to a rare form of cancer in 2014, said the results are "not a scare tactic or a ploy, but results from a legitimate science, that can't go ignored."

"We need to be looking at the water and the soil and the air. And we need to be testing frequently," added Davidson.

EWA wants the EPA to reconsider its boundaries overall.

Limited sampling also found high detections of TCE along Hurricane Creek, suggesting there could be impacts beyond the creek.

"EPA needs to back away from statements that they're making that there's no widespread contamination before the kind of widespread testing is done," said Shannon Lisa. "You can't tell people to stop breathing. So it's really important that we start getting these loose ends tied up," she continued.

On Thursday, the EPA issued the following response to the report by Mundell and Associates:

EPA has received the report and has begun reviewing it. After this review is complete, EPA and Indiana Department of Environmental Management will coordinate on appropriate next steps.

EPA and IDEM are coordinating their efforts to respond to contaminated sites in Franklin and Johnson County, Ind. In Franklin, IDEM has identified several sites and is responding through its State Cleanup Program. EPA’s current efforts in Franklin are focused on the Amphenol site, which is being cleaned up under the authority of the federal Resource Conservation and Recovery Act.

The agencies have conducted extensive sampling of the air, groundwater, soil, sewers, and in people’s homes. Although contamination has been detected, the contaminated areas are isolated (not connected underground via groundwater).