13News investigation prompts DWD to act on some pending unemployment claims, but many more remain

Hundreds of Hoosiers from across the state have shared their desperate stories as they wait month after month for a resolution to their unemployment claims. 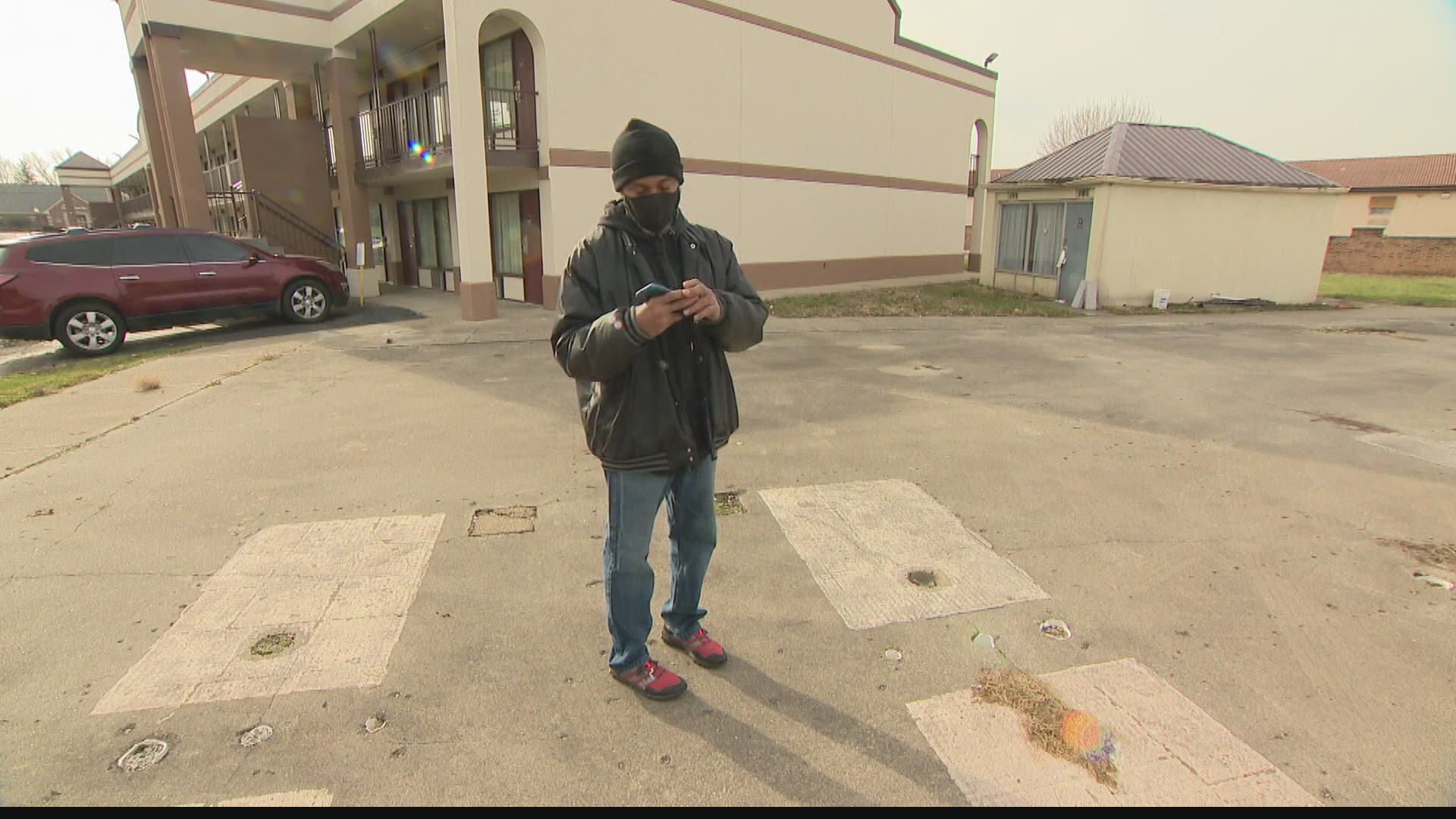 INDIANAPOLIS — The Indiana Department of Workforce Development has taken action on a number of pending unemployment cases following a 13News investigation that exposed a severe backlog of unemployment claims across Indiana.

But thousands of other cases remain in limbo, resulting in evictions and homelessness for some Hoosiers who have waited months for DWD to resolve their claims.

13News has been reporting on the backlog since last spring, when Indiana and other states were swamped by a record number of unemployment claims triggered by pandemic-related layoffs. 13Investigates reported that Indiana DWD had more than 1.2 million pending unemployment claims by the end of October – claims filed by thousands of Hoosiers trying to get the unemployment benefits they are entitled to receive.

Kim Saunders filed several of those claims. The Indianapolis hairdresser waited seven months with no response from the Indiana Department of Workforce Development. Eventually, a DWD claims investigator contacted Saunders in November and suspended her right to benefits – denying all of her claims for pandemic unemployment assistance – because Saunders had improperly answered one question on her application form. One day after 13News reported her story, DWD reversed course and all of the unemployment money the state owed Saunders suddenly appeared in her account.

Credit: WTHR
Kim Saunders has been waiting seven months for unemployment assistance due to a simple mix-up on her application.

"I’m relieved and I feel really blessed that I got it, but I really worry about all the other people who are in the same situation. They deserve their benefits too,” Saunders told 13News.

After highlighting Saunders’ story, 13News was flooded with emails and social media posts from other people detailing a similar experience. Hundreds of Hoosiers from across the state shared their desperate stories as they wait month after month for a resolution to their unemployment claims with no communication from DWD.

13News compiled the stories and complaints, along with detailed information about the claimants, and sent them directly to the Department of Workforce Development with a request to review each pending case. WTHR also sent the materials to DWD chief of staff Josh Richardson and DWD commissioner Fred Payne. When asked about 13News’ investigation, Payne recently pledged “every eligible Hoosier who files for unemployment benefits will be paid their benefits.”

A department spokesman responded to the complaints by email a week later.

“We are not permitted to respond to any individual claims, all claims are addressed and investigated with the same and equal process,” said DWD chief communications officer Bob Birge.

While DWD is not saying much (it has ignored 10 separate 13News requests for an interview over the past several months), the people who contacted WTHR are speaking out.

“Woo-hoo. We did it!” exclaimed Claudia Hamilton, celebrating the unexpected approval of her pandemic unemployment assistance (PUA). Hamilton is a Muncie hairdresser who, like Kim Saunders, answered one question incorrectly on her PUA  application. That mistake prompted a seven-and-a-half-month delay by DWD. Hamilton said she had completely given up hope that she would receive anything after a recent phone call with a DWD representative.

“The man said my file was closed and it would never be reopened and that I was just out of luck, and that’s when I gave up,” she recalled.

But that changed after discovering Saunders patiently battled DWD and won. Hamilton contacted 13News to share her story, and WTHR forwarded details of her case to DWD.

“Within two days, I received all my back pay. I got my money,” she said.

“If I didn’t reach out to you, I’m 100 percent confident there would have been nothing in my bank account,” he said.

Bates, a janitor who lost his job in Merrillville because of the COVID-19 pandemic, said DWD has approved only a fraction of the weekly claims he has submitted. After battling Indiana’s unemployment system since March – repeatedly contacting DWD to understand why his claims were delayed but never getting an answer – he is shocked the state has finally sent anything at all.

Credit: David Bates
David Bates filed appeals with the DWD, but didn't get his money until he reached out to 13News for help.

Bates and Hamilton are among eight unemployment claimants who say DWD has issued partial or full benefits since 13News contacted the department on their behalf. They are grateful to receive some of their benefits, but they’re also angry that it took intervention by the media to get what they should have received months ago.

Many of the people who contacted 13News about their delayed unemployment benefits are still waiting for resolution; they want the money they are entitled to - or at least to be told why they are not eligible. And some of them say they are running out of time.

“I write today out of desperation…I’m scared, I’m afraid of what comes next,” wrote Robyn Russell, who’s been out of work since March and still waiting on her unemployment benefits.

“I owe taxes on my house. My utilities are going to get shut off. Somebody please help us,” pleaded Mindy Walden, who said she has provided DWD with ID verification five times in the past month but is still waiting for her claims to be approved.

Wendell Cheese was just evicted from his home and lost his car. He is now homeless, living in a local motel until his remaining money runs out.

Credit: WTHR
Wendel Cheese is living in an east side motel after he was evicted from his home.

As he tried calling DWD Thursday afternoon to check on 16 weeks of pending claims, Cheese heard a familiar message:

“Thank you for contacting the Indiana Department of Workforce Development. We are currently expecting longer wait times than usual. We appreciate your patience,” said a recording at the start of his call.

The certified forklift operator is out of patience. He said he does not understand why it takes months to resolve questions and discrepancies on unemployment claims, and he has called DWD daily in an attempt to answer any questions the department might have for him.

13News told the Department of Workforce Development about Cheese a week ago, but so far, his pending case is one of thousands the state still has not gotten to, and it’s not clear when claims investigators will.

“Being homeless, this is something I’ve never experienced, and it’s like the Department of Workforce Development don’t care,” Cheese told 13News. “Somebody needs to do their job. Somebody needs to contact me because this is a situation that can be avoided."

He said he is now putting his faith in God and hopes Indiana Governor Eric Holcomb will take action to help fix a system that’s leaving thousands of Hoosier to struggle for survival.

“This is not fair. We are tax-paying citizens going through troubled times, and we’re getting no recourse from a government that’s supposed to be helping us out,” he said before walking back to a motel on the east side of Indianapolis.

13News asked the governor what steps he would take to address the significant backlog of cases now clogging Indiana’s unemployment system. He did not answer WTHR’s questions, instead deferring to DWD Commissioner Fred Payne.

The commissioner also failed to answer WTHR’s questions, instead pointing out that the department has successfully paid about 80% of all claims within 21 days during a pandemic that has triggered a record number of unemployment claims. He also said a high level of fraud has delayed the investigation of some pending claims and required DWD to create more steps to verify the identity of claimants.

Neither Payne nor the governor explained why some claimants have been waiting six months or more for their pending cases to be resolved.

Last month, DWD whistleblowers told 13News the department will not allow 300 contracted workers who answer calls for the state’s unemployment helpline to actually help Hoosiers who are trying to resolve their pending claims. According to the whistleblowers, only claims investigators can resolve claims, and the contracted workers at the call center are not permitted to forward calls to the investigators.