Just seven hours after a local hairdresser was featured in a 13News investigation, she woke up to find the state agency had suddenly changed its mind. 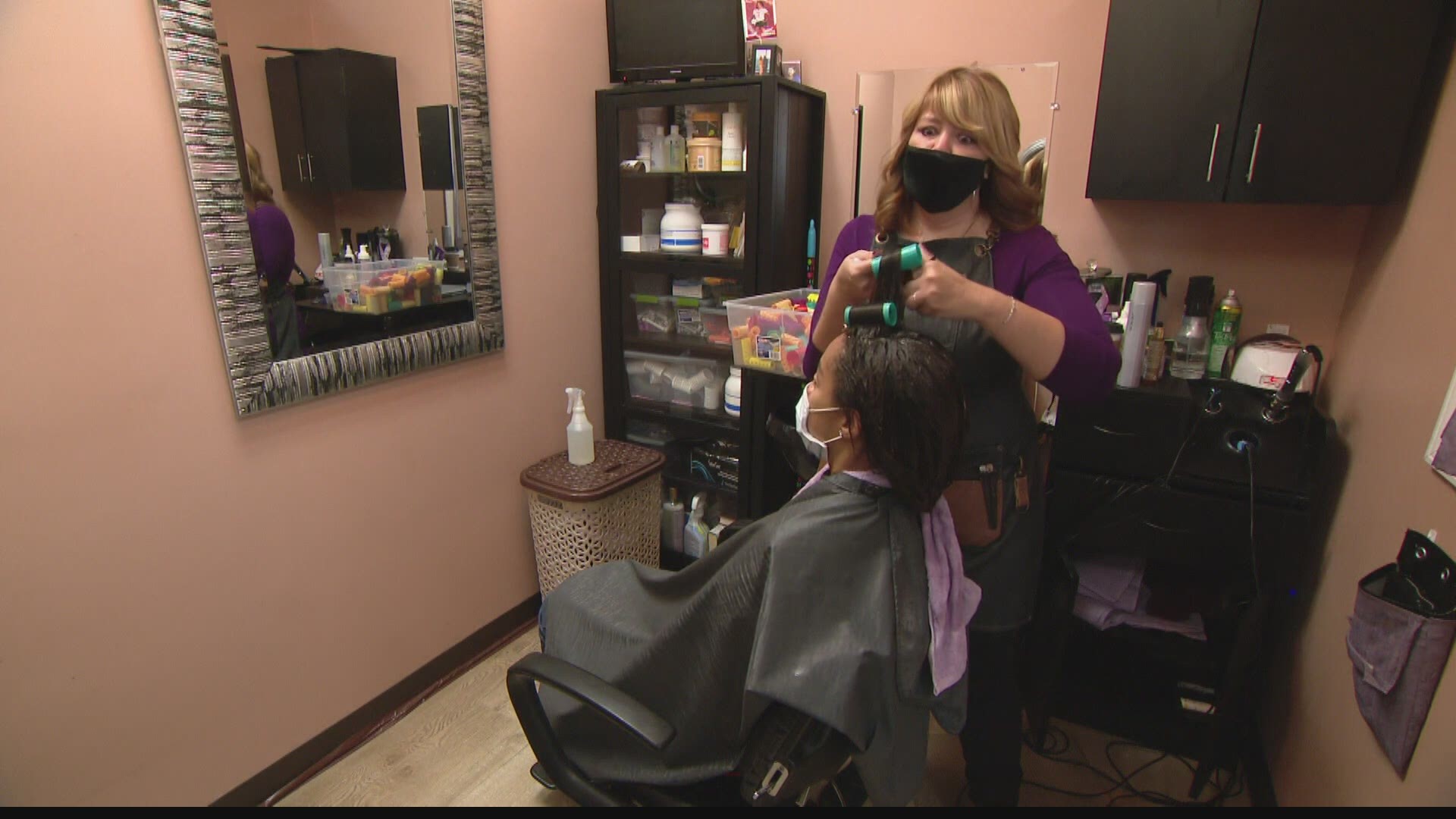 INDIANAPOLIS — For the past seven months, Kim Saunders has battled the Indiana Department of Workforce Development to get the unemployment benefits she is entitled to receive.

Last month, a DWD investigator informed the Indianapolis hairdresser that her right to collect nine and a half weeks of pandemic unemployment assistance (PUA) was denied – all due to a simple error on her application form.

But just seven hours after Saunders was featured in a 13News investigation, she woke up to find the state agency had suddenly changed its mind.

All of the PUA that Saunders was supposed to receive had been deposited into her account.

“I was shocked,” Saunders told 13News Tuesday morning. “But I’m also pretty frustrated. It never should have taken an investigation on the news for them to do the right thing. And my real concern isn’t me. It’s all the other people out there who are fighting this same fight, who are not as fortunate as I am, and who don’t know what to do next.”

Monday night, 13News revealed the number of pending unemployment claims in Indiana has grown to a staggering 1.2 million cases by late October (the most recent data WTHR has obtained from DWD). That is a significant increase from 708,000 backlogged claims in late August.

Saunders was among those statistics, which includes Hoosiers who have been waiting months for their unemployment claims to be processed and paid.

DWD insiders told 13 Investigates the delays are often the result of minor misunderstandings or application mistakes that could be easily resolved -- but are not because of a backlogged system that is overwhelmed and understaffed.

Saunders, a hair dresser for more than 30 years, followed the governor’s executive order that shut down all non-essential businesses in April.

Her northwest side hair salon was closed for nearly 10 weeks, which prompted Saunders to file for PUA benefits while she waited to see if and when she could schedule clients again.

“I’ve never ever had to fill out unemployment – ever – in my whole life,” she told 13News.

She found one question on the application to be confusing. It asked if she was able to work.

Saunders believed the correct response was “no” because, she reasoned, she would be violating the state’s mandatory shut-down order if she continued to work during the pandemic.

“It was killing me not being able to meet with my clients and work every day, but I wasn’t allowed to. In my field, I was not able to work. We were grounded as an industry, so I thought that was how I was supposed to answer,” Saunders said.

What the state actually wanted to know was whether Saunders was physically capable of working, so her answer raised a red flag.

Months passed and Saunders was still waiting for her benefits.

Saunders called the DWD helpline to check on the status of her claim. She was reassured the error on her application was simple, but that it could only be resolved once a claims investigator reviewed her file.

The review didn’t happen until the end of October – six months after Saunders first filed for PUA benefits – and the results shocked the longtime hair dresser.

Hours after explaining the mix-up to a DWD claims investigator, she received a determination letter from DWD.

It said “the information the claimant provided shows that they are not able and available for employment which makes them ineligible for PUA benefits.” Her right to thousands of dollars in unemployment assistance had been denied.

In the process, DWD ignored Saunders’ explanation that she misunderstood the form. The DWD investigator also ignored the fact that she had worked every week leading up the state’s COVID-19 shutdown order and that the hair dresser has worked every single week since the shutdown order ended.

13News brought the case to the attention of DWD last week, and an agency spokesman said it would be forwarded for further investigation.

Early Tuesday morning, after Saunders’ story was broadcast on 13News and published on WTHR.com, she discovered DWD had reversed course. Her suspension was lifted, and nine and a half weeks of unemployment payments appeared in her account.

“I’m relieved,” the longtime hair dresser said after discovering the news. “But my real concern isn’t me. It’s all the other people out there who are fighting this same fight, who are not as fortunate as I am, and who don’t know what to do next.”

Saunders is especially concerned after hearing a DWD insider speak out during the 13News investigation.

The whistleblower, who does not want to be identified for fear of being fired, is one of about 300 contracted workers hired by the state to talk to people about their unemployment claims.

The call center worker says those contractors who answer the state's unemployment helpline are not actually allowed to help callers who need it.

Whistleblower: The department won't let us do it because we're not DWD agents. We're just contracted.

13News: What ARE you allowed to do?

Whistleblower: Nothing. We really can't do anything. What we're supposed to do is read off of a few scripts to let them know this is the problem. A claims investigator may need to reach out to you. That's essentially it. And the Department of Workforce Development thinks it can be just that cut and dry with people, but I assure you anyone that we are talking to doesn't want to hear those scripts… We're going on roughly six months now doing this. It's taking an emotional toll knowing that we actually can't help people.

You can watch an extended interview with the whistleblower and see the full 13News investigation here.