The new CrimeDoor app created an augmented reality video of the moments before Libby German and Abby Williams were killed. 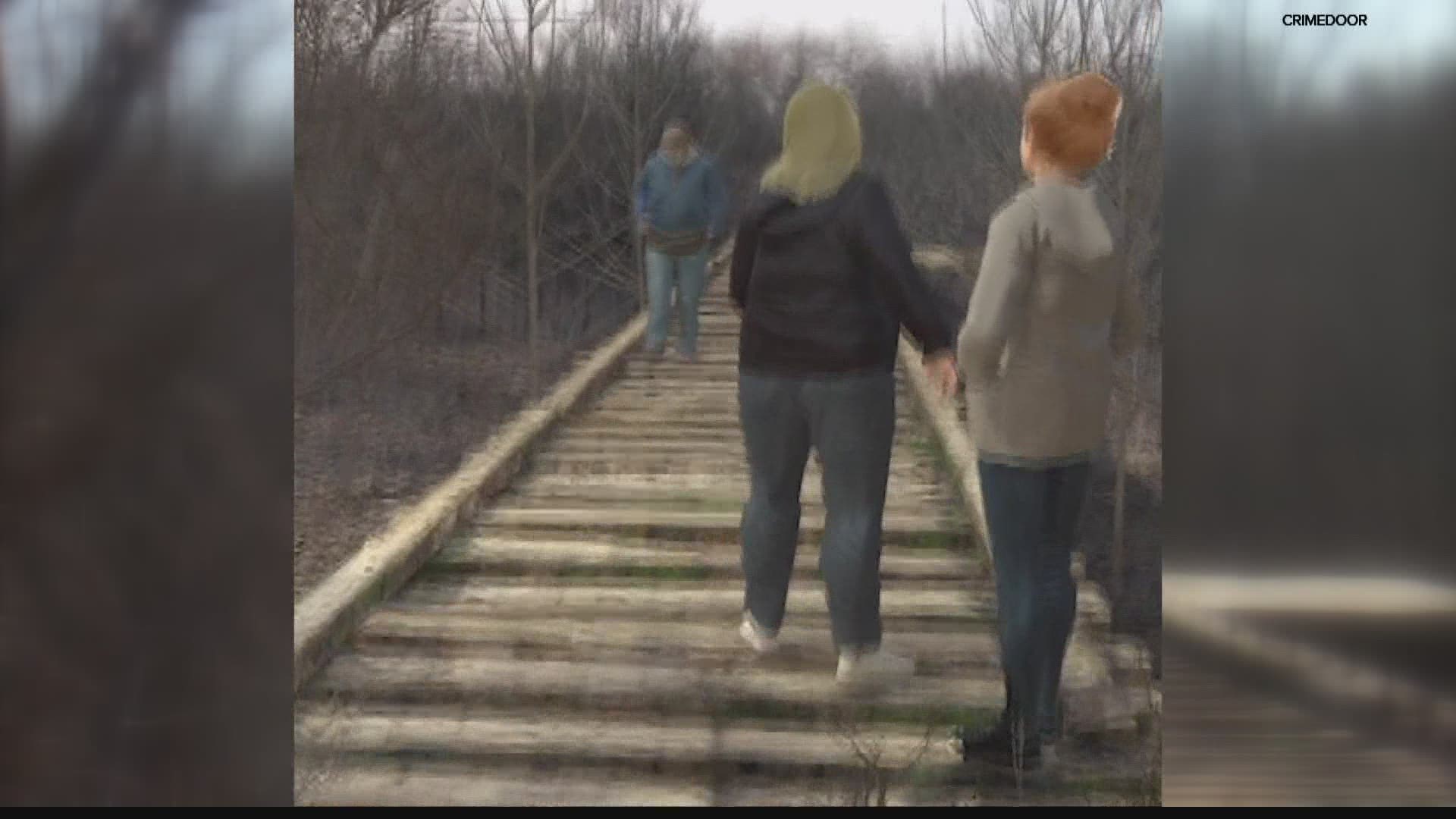 DELPHI, Ind. — Nearly four years after the murders of two girls in Delphi, new technology is providing a new look at a crime that took the lives of teenagers Abby Williams and Libby German.

The grainy video of the suspected killer walking toward the girls was used to create a three-dimensional augmented reality video of the crime scene.

"It is like you are standing on the bridge with them out there seeing this," she said.

There's the suspect approaching Libby. Her phone is out, recording a video, her best friend Abby at her side.

"It really brought into perspective what they were seeing and the person being there gave me a perspective of what he looked like," Kelsi said.

The families hope the new video will.

"It's going to help trigger somebody's memory and they are going to say, 'Wow. I really know who this looks like," Kelsi said.

Credit: Indiana State Police
This sketch released by police April 22, 2019, depicts the suspect behind the February 2017 murder of Abby Williams and Libby German in Delphi, Ind. It is considered more accurate than the original released in July 2017. (courtesy Indiana State Police)

The Delphi murders are among hundreds of unsolved crimes featured in the brand-new CrimeDoor app.

It's aimed at fans of true crimes. Before signing on to help create CrimeDoor, Paul Holes was a detective specializing in cold case investigations.

"It is another tool," Holes said. "It's another source of information that could potentially give Kelsi and her family and Abby's family an answer."

State police insist the case is far from cold. Two investigators work it every day and they are still getting new leads.

"I still have so much hope," Kelsi explained. "I talked to an investigator the other day. He told me to remember that they are never stopping. No matter what, they are going to keep fighting for us."

And fighting for Abby and Libby.

If you have any information about the case, police ask that you please send tips to Abbyandlibbytip@cacoshrf.com.

Try to include the following information:

Police say you don't need to have all of those pieces to send a tip, but do ask you include as many details as you can.

Abby Williams and Libby German had been hiking near their hometown of Delphi, about 60 miles northwest of Indianapolis on February 13, 2017 when they went missing.

A day later, on Valentine's Day, their bodies were found in a rugged, wooded area.