Many of the fans caught up in the deadly crowd surge are still traumatized and trying to process what they saw. Others had no idea anything was even wrong. 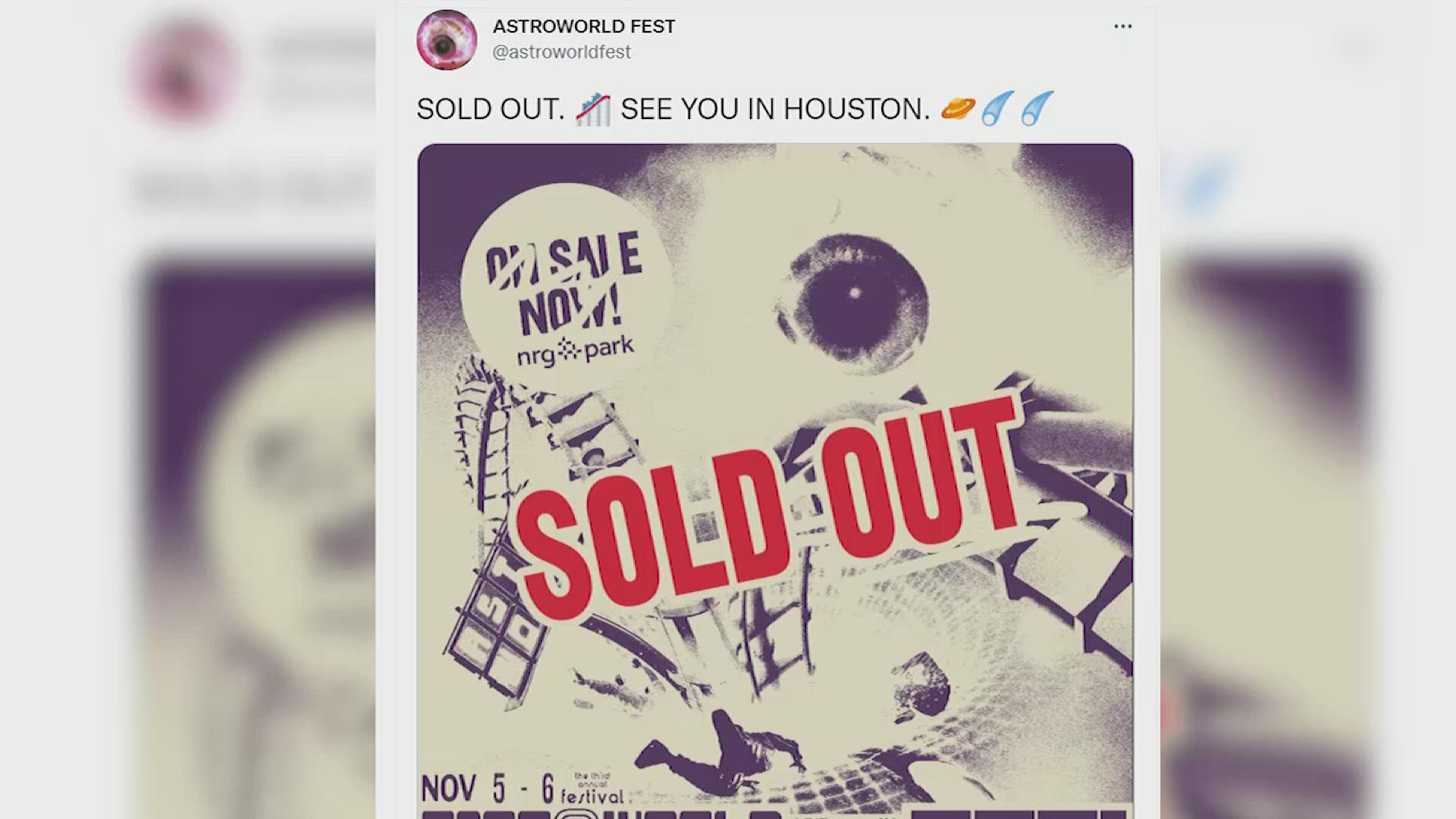 HOUSTON, Texas — Cell phone videos -- combined with what we've learned from city leaders and first responders -- are giving us a closer look into what happened as the Astroworld Festival tragedy unfolded.

The excitement leading up to the event featuring headliner Travis Scott and several others started months ago. More than 50,000 Astroworld tickets sold out quickly back in May. Thousands waited six months for the concert and were excited when November 5 finally arrived. No one dreamed that it would turn into a nightmare that ended with the deaths of eight young people.

2 p.m. -- The chaos started Friday afternoon as the festival got underway. Dozens pushed through the gates, and many were knocked down and trampled in the rush. At least one person was hurt, according to Houston Fire Chief Sam Pena. 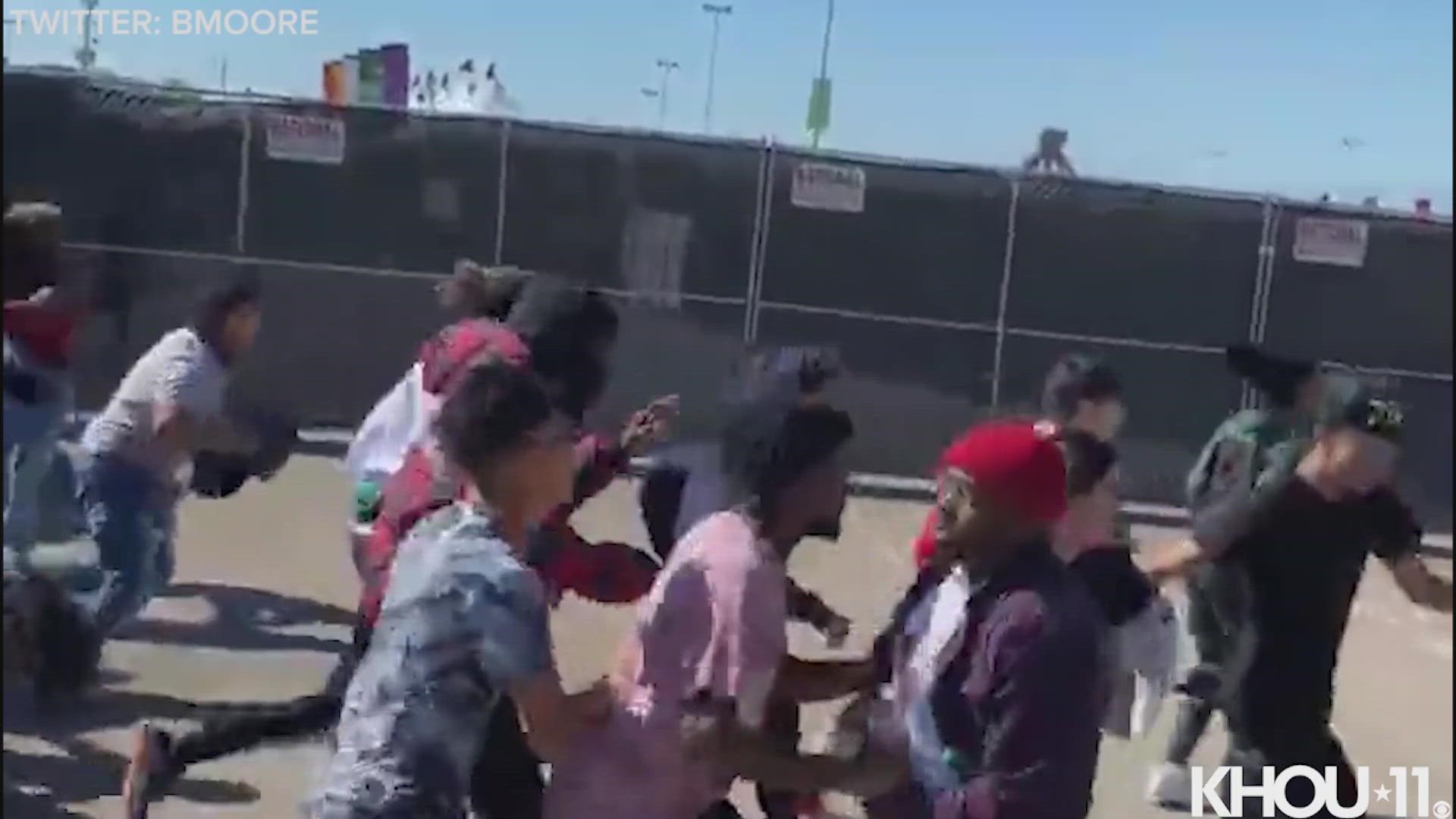 At some point Friday, Houston Police Chief Troy Finner said he met with Travis Scott to express his concerns about public safety at the event. Finner said he asked the Houston native and his team to work with HPD to prevent problems at the festival.

One festival goer shared videos that show nothing out of the ordinary happening throughout the afternoon and early evening as fans enjoyed the music.

7:30 p.m. -- SZA was scheduled to perform. She later posted on Twitter that she didn't stay after her concert because she didn't feel well.

Houston I no feel so good but thank you for having meeee sorry I didn’t kick it w the crowd tnt 💜 #ASTROWORLDFest 🧝🏾‍♀️ pic.twitter.com/jbp0O9Lrht

8:30 p.m. -- Fans said a timer began counting down to headliner Travis Scott's performance. ICU nurse Madeline Eskins said she started pushing toward the front as the concert got closer.

"And all of a sudden, people compressed up against each other and were pushing forward and backward. As the timer got closer to coming down to zero, it just -- it got worse and worse," Eskins told CNN.

Eskins told KHOU 11 that she couldn't move or breathe and felt like she was "drowning in people." She said she passed out and her boyfriend and a security guard crowd-surfed her to safety. When she woke up, Eskins said she helped triage and treat other concertgoers.

RELATED: 'Drowning in people' | ICU nurse describes passing out in crowd surge at Astroworld Festival, then helping others

9:22 p.m. --  Videos show what appears to be a typical concert, many fans dancing and singing while others were struggling because of the crowd surge, according to social media accounts.

9:38 p.m. -- Video shows people are stopped, many concerned, looking down, while the concert continues in the background. Three minutes later, a security officer is on his radio, and one minute later, dozens of hands are in the air, signaling for help.

That's when the Houston Fire Department declared a mass casualty event, according to Chief Pena.

9:53 p.m. -- Video shows people were unconscious on the ground, security workers and bystanders were giving them CPR.

Pena said 11 patients were in cardiac arrest when they were transported to area hospitals.

“Cardiac arrest simply means the heart stopping,” Dr. George Williams, a critical care anesthesiologist with UTHealth Houston and LBJ Hospital, told KHOU 11.  “In a situation like that, when the lungs are squeezed like they are in a crowd situation, oxygen levels drop very quickly and because of that, the person loses consciousness and their heart is not able to function like it should.”

9:54 p.m. -- Surprise guest Drake is on stage, where he performed with Travis Scott for the next several minutes while people on the ground are waiting for help.

Some fans were begging Scott and his crew to stop the concert. At one point, the rapper stopped and said somebody passed out in the front and needed help. Then he started singing again.

What about this, his staff are responsible alsopic.twitter.com/lnxZYlnhUO

Video on social media showed first responders trying to get through the masses of people but some people blocked them while others jumped on top of the vehicle.

Chief Finner said police asked Scott to stop the show at one point but didn't say what time that happened.

After he pointed out the EMTs in a golf cart in the middle of the crowd, Scott sent his hype men into the crowd to body surf.

10:05 p.m. -- A Houston police officer is helping people in one section where the stunned crowd is at a standstill.

10:08 p.m. -- Stretchers arrive, nearly 30 minutes after those initial concertgoers were trying to flag down for help.

At a news conference early Saturday morning, Pena said 25 people were rushed to area hospitals and more than 300 were treated at the festival.

A command center was set up at the Wyndham Hotel near NRG Park for families whose loved ones were unaccounted for.

Chief Troy Finner confirmed reports that a security guard passed out after being pricked in the neck while trying to restrain someone. He said the investigation into what went wrong will look at all possibilities.

Astroworld was canceled for the rest of the weekend.

Travis Scott said he was "devastated" and had no idea that people were dying or he would have stopped sooner.

The first of many lawsuits were filed on Sunday as we learned more about the eight young people who died.