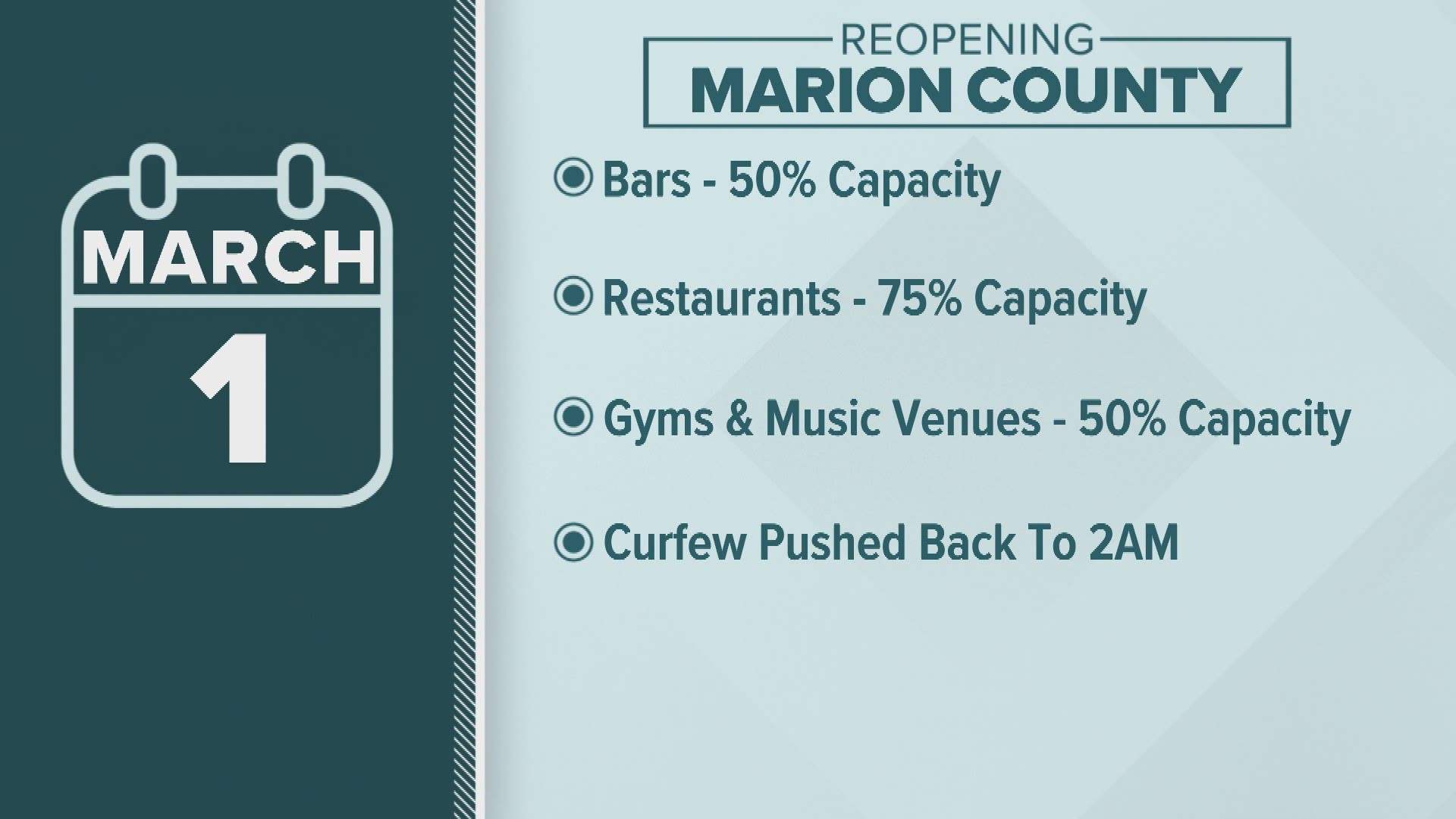 INDIANAPOLIS — Steve Kelly, the manager of the downtown Kilroy's was all smiles late Thursday morning, having just received the best news he's heard in nearly a year. Marion County Health Director Dr. Virginia Caine had just announced she was easing up on the county's COVID-19 restrictions.

Kelly said as soon as he got wind of it, he "sent a text to everyone, all of my staff. We're all pretty pumped and excited. It's a big hallelujah moment for us."

"2 a.m. is huge. It's an extra two hours for us. We're loving it. We appreciate whatever we can get right now," Kelly said.

It felt celebratory and it's easy to understand why. Coming up on one year ago, the Big Ten men's basketball tournament was cancelled on the second day because of the pandemic. Since then, Marion County bars, restaurants, and music venues have operated at greatly reduced capacity (and early on, were forced to close) as part of the county's public safety measures. Over the last 11 months, many shut down for good.

With Indianapolis now hosting nearly all of March Madness, along with the Big Ten men's and women's tournaments, Sara Etherington, events manager of The Slippery Noodle, said "There's some light at the end of the tunnel," quickly noting there haven't been many events to plan over the last year.

Etherington said, typically, they would have been "planning for months if we had the Big Ten or Final Four, so having everything at once is crazy."

Yet she's not complaining. Quite the opposite. The loosening of restrictions just ahead of March Madness offers more than a glimmer of hope for places like The Slippery Noodle, which have struggled to survive.

She said what they're doing now is scrambling to understand how the new rules will work. While capacity increases to 75 percent, social distancing must remain in place. How can they maximize the number of patrons while complying with the health ordinance?

"We're going to be working with table diagrams and measuring things out," she said.

When asked if they planned to hire more people, Etherington said, "Absolutely!" She's just not sure how many.

While Indianapolis will not see the tens of thousands of fans that typically flock here for the tournaments - because of limited capacity at the venues - restaurants and bars still expect local fans to come out in force.

Kate Rooney, who manages Pearl Street Pizzeria and Pub, said she's most "pumped" about the return of bar service and the new 2 a.m. closing time.

"It will be absolutely huge for us," she said. "I'm ready to get behind the bar and thrive off of it. I think all of us that work here do better in a busy, fast-paced realm and we love interacting with people."

Rooney, too, talked about beefing up the staff.

"We're going to need more to come in and help out. It's going to be very busy," she said.

Camden Alfrey, having lunch at Kilroy's with two colleagues, said of the changes, "it's great local businesses get a chance to get their revenue following and it's great because people are really excited to get back downtown for the nightlife."

While social distancing and masks will still be required, it's one step closer to the pre-pandemic days, which few would argue, can't come soon enough.