Vigils, memorials and prayer services were held throughout the day on Sunday to mourn the loss of Kalen Hart and Lendon Byram. 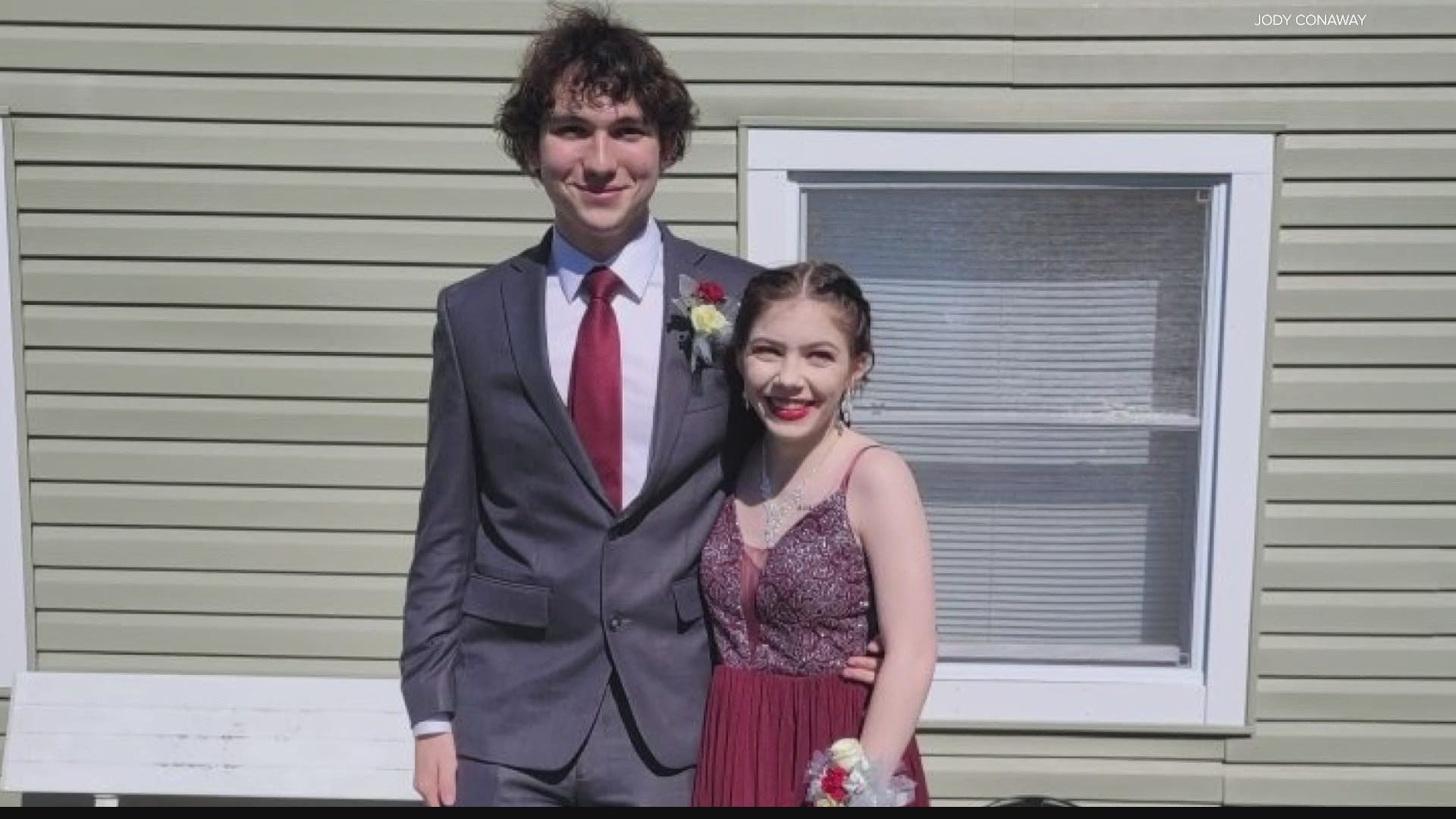 ARCADIA, Indiana — Friends, family and community members gathered multiple times on Sunday to pray and mourn the loss of two students who died in a crash on their way to prom Saturday.

The couple had been dating since the beginning of the year.

RELATED: Two high school students die in crash on their way to prom

Lendon's aunt said he was so happy on Saturday and was looking forward to taking his girlfriend Kalen Hart to prom.

On Saturday morning, Kalen and her friend Alyssa, who was also in the car during the crash, did their makeup at Kalen's house. Then they left to get their hair done by Lendon's aunt, who's a hairstylist. They took photos and visited Kalen's dad before heading to her mom's house.

The crash happened at 5:15 p.m. when Kalen, Lendon, and their two friends were driving back to Kalen's mom's house.

Kalen was 18-years-old. She would have turned 19 in August.

“She was amazing," Kalen's sister Bailey Burnworth said. "She was a great person. She just loved everything. Happy spirit. She would never be sad. She was just amazing.”

Kalen's mother Jody Conaway described Lendon as "sweet and respectful." She said he will truly be missed.

"I really felt like he was one of the best things that ever happened to Kalen for a while…we will miss him at our house. We will miss him," Conaway said.

Cathedral High School held a memorial and prayer service in memory of Lendon on Sunday afternoon. Dozens of people from the school, including classmates, staff, friends, and family, went to the memorial to share memories and mourn his loss.

The Cathedral family has lost three students this year, including Lendon. As a Catholic school, they always try to lean on their faith to get them through difficult times.

It is with great sadness and a heavy heart we share the passing of Lendon Byram '22. Cathedral will have counselors and members of our faith-based community on our athletic/football practice field Sunday at 1 p.m. to gather, grieve, and pray. Rest in peace, Lendon. pic.twitter.com/UcwbAR5UDh

Lendon's friends said you knew it was Lendon when you saw his big hair and famous smirk. They said it was his kindness that made him special.

"My daughter was talking about him this morning and she said 'he was friends with everybody, mom,'" Cathedral High School Principal Julie Barthel said during Sunday's memorial. "The other young man that stood up [during the service] said, ‘I didn’t know him that well but every time I saw him, he was kind, inviting and caring.' So, that’s who Lendon was.”

He had a big personality and loved history. He was also a great writer. Lendon's history teacher described him as a bright and engaged student.

"He would send me emails, random emails about lost Roman legions in Asia and the secession of Napoleon, but that passion... every time you open an email like that, it means so much as a teacher," his teacher said. “So, I pray that we all find that as we move forward in life, we touch people as Lendon has touched us.”

Lendon had recently been inducted into the National Honor Society and he qualified for a national tournament as part of his school's speech and debate team.

"Our speech and debate team is just broken without him," Barthel said. "He was such a force. Not only did well but was a mentor to our younger students. His family and coach were so proud of him that he just qualified for nationals."

Credit: WTHR
Lendon Byram had recently been inducted into the National Honor Society. He was described as a bright student with a big personality.

During the vigil, a pastor said a prayer as Kalen's family, friends, classmates and community members hugged and mourned Kalen's death.

Credit: WTHR
A vigil was held for Kalen late in the afternoon on Sunday, May 2, 2021. During the vigil, a pastor said a prayer and people hugged as they mourned Kalen's death.

Kalen's family said she was passionate about choir and singing. She also loved art, painting, astrology and junk food.

Kalen had worked at Pizza House in downtown Cicero for almost two years. She was planning on going to Indiana University Kokomo to become a teacher.

Kalen's mom Jody Conaway said Kalen had just gotten her graduation cap and gown and she was trying it on the other day. Conaway said she and Kalen's grandmother were filing out invitations for Kalen's graduation when she heard the news.

“My mom and I were sitting filling out invitations for her graduation when her dad called me and gave me the news that it had happened," Conaway said. "We were starting to get worried because too much time had elapsed from the time she had left his house and she wasn’t at my house because I know how long it takes because I made that travel so many times and her dad called and broke the news that Kalen had passed away.”

Conaway started a fundraiser on Facebook to help cover the costs of Kalen's funeral and burial.

Another fundraiser was launched on GoFundMe to help Kalen's family and to purchase remembrance items and other things her family could use to keep her in mind.

RELATED: Fundraiser created for family of Hamilton Heights student killed in crash on way to prom