The kids don’t just learn about tire pressure, they learn how to handle life’s pressures. 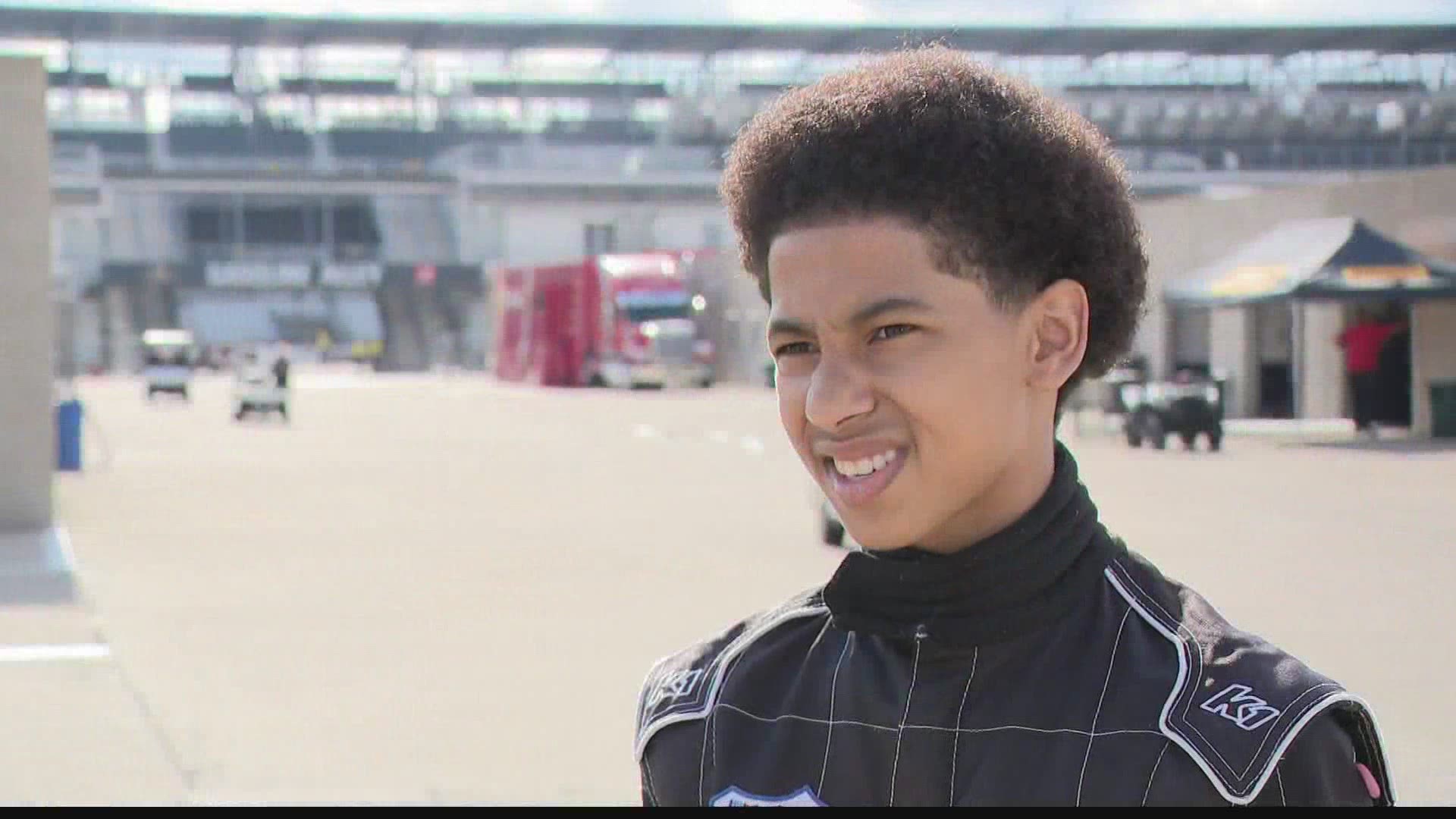 SPEEDWAY, Indiana — “I knew Indiana was a spot for racing, but I never really thought about it,” said Elijah Williams, standing in Gasoline Alley at the Indianapolis Motor Speedway.

That all changed last year, the first time then-12-year-old Elijah sat behind the wheel of his first go-kart.

“It’s pulling me in,” Elijah said, smiling, talking about the thrill of racing.

Now, the eighth grader is sporting a racing team uniform on the weekends and driving in a Grand Prix series for youth.

“Racing with my friends, I think that’s the best part,” said Elijah of his new-found passion.

“I really saw some potential in him, a lot of potential,” said Rod Reid, the person responsible for Elijah’s introduction to a world that had always been in his backyard, but always seemed a world away.

“We were designed to help kids who are underserved, if you will, and under-represented in a lot of our community, so we concentrate a lot on boys and girls in the African American community,” Reid explained.

Kids, like Elijah, who participate in the program learn everything there is to know about motorsports and more.

These kids don’t just learn about tire pressure, they learn how to handle life’s pressures.

“We use motorsports as a vehicle to help them with life skill development,” Reid explained. He and the academy’s other instructors are opening doors into opportunities that Elijah and some of his peers never even dreamed about.

RELATED: Inspiring Indiana: The power of music during the pandemic

“There are so many jobs, marketing, mechanic or engineer, beyond just being a race car driver,” Reid added, saying he hopes to build a greater interest in motorsports in the African American community.

That’s not easy, he said, given past practices of segregation in the sport through the 1950s.

“At the time, because of discrimination, they couldn’t race with regular guys racing. They couldn’t be on the normal circuit,” Reid said. “Unfortunately, because there weren’t a lot of Blacks in the motorsports industry, culturally, African Americans didn’t really support it that much.”

In the 14 years, NXG has been around, more than 1,000 kids have come through the program.

Reid’s work hasn’t been in a vacuum.  The non-profit has had supporters, including this year, among local artists and The Harrison Center for the Arts.

Across town, Brian Presnell, an artist and owner of Indy Urban Hardwood Company, is hard at work on his own latest effort to give back.

“There are people that opened doors to for me, helped me exponentially and I’m trying to reach back into the community how ever I can in small ways,” Presnell explained.

The Herron School of Art and Design graduate is busy, turning recycled trees into charcuterie boards.

“We recycle logs here. We recycle all the trees in the city,” Presnell said, as he cut pieces of wood in his southside studio.

“This is called ‘urban lumber.’ That’s the hashtag or the buzz word,” he explained. “We spend about a half hour on each board, sanding them.”

Once he cuts the boards, they go right into the hands of local artists who have turned them into finished pieces of art that are now on display at The Harrison Center.

“I’ve been having a lot of fun with them. This is the first time I’ve done charcuterie boards at all,” said artist Johnny McKee, who has already created designs on five of the boards. More than 40 different artists have done the same. Part of the money raised from their sale will go to NXG.

“I’m just elated that they thought enough about these kids to want to support them. It’s fabulous,” said Reid.

For Elijah, it’s a guarantee more kids who look like him will get the chance just like he did, to learn about motorsports and all the places that knowledge can take them.

He certainly has his own big dreams where that’s concerned. Elijah plans to someday sit right behind the wheel of his own race car, maybe at the Indy 500.

“Yeah, I’ll be there,” Elijah replied.