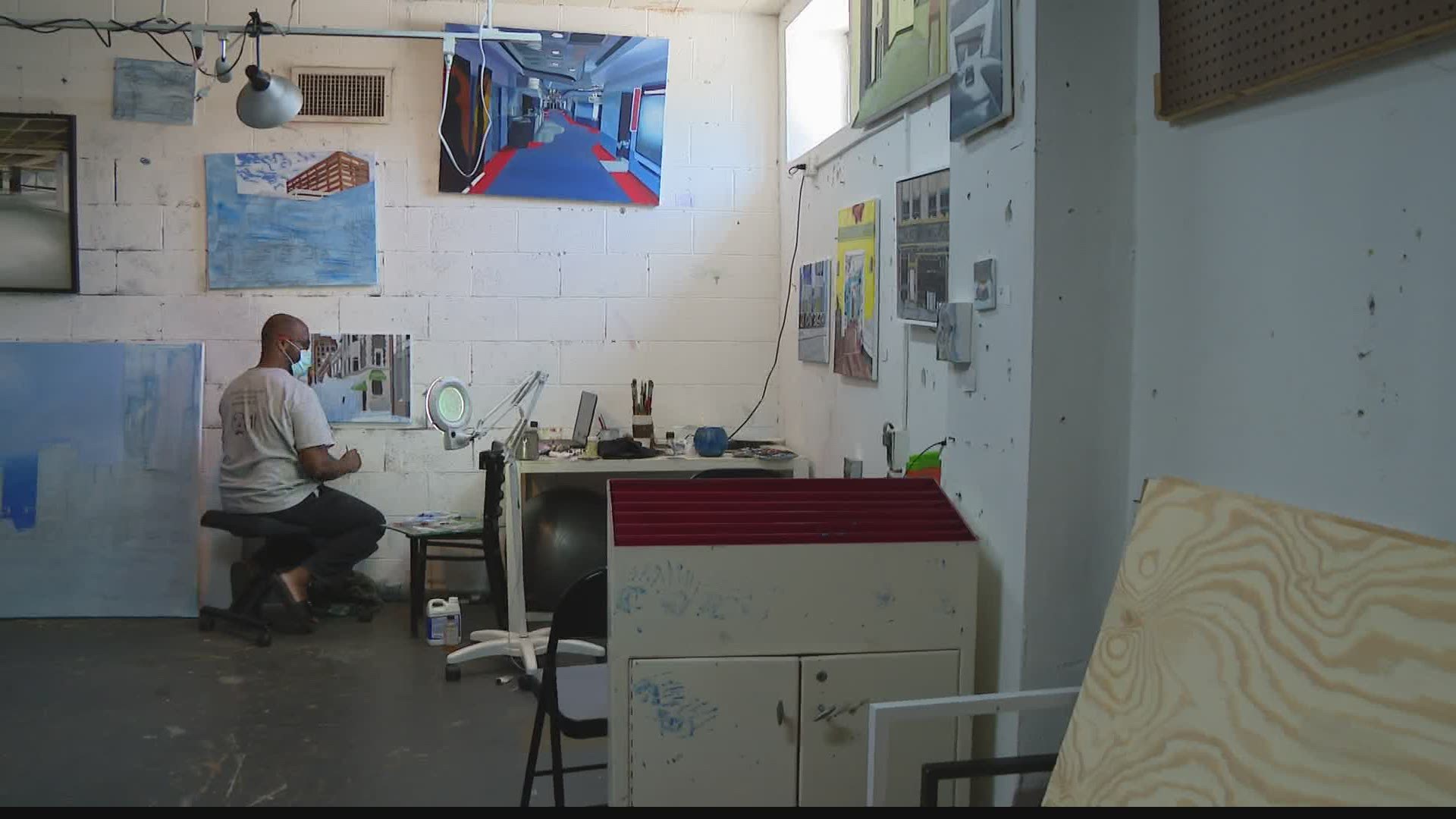 INDIANAPOLIS — Courtland Blade is spending countless hours inside his studio at The Harrison Center.

He is working to preserve history, not through the lens of a camera, but by the stroke of a brush.

"It really feels like a historical moment," he said. "It's a pivotal moment that needs to be recorded."

The Indianapolis artist is painting the images he saw after attending a prayer vigil at City Market two weeks ago.

"I'm a Christian, so prayer is important," Blade said. "It was nice to see the different faith backgrounds, denominations, all races and ethic groups praying for the same purpose, for unity and for peace."

Afterward, he roamed the streets of downtown, taking pictures and drawing sketches of what he saw.

"I didn't know what to expect at first," he said. "You hear about the protests and what's going on, and then you see it, the boarded up windows and graffiti."

He points to the painting he's working on, showing the area of Ohio Street near Talbott.

RELATED: Artist takes up mission to sketch victims of COVID-19 for families

"It's a normal image, but then you see the statement here, 'stop killing us' spray-painted on the side of a building," Blade said. And not far away, the words "I can't breathe," which Blade calls "the final straw that broke the camel's back."

He said he wanted to capture those and other statements, "bringing to light the issues at hand, dealing with murders and police brutality. "It's giving voice to people who typically don't have a voice," said Blade.

Voices now that will not be silenced.

Harrison Center
One of the things we love most about the fantastical work of our fri... end Kyle Ragsdale is the diversity of his cast of characters. Kyle's recent body of work "Waiting for the Storm to Pass" features people of diverse ages, races, and historical periods all huddled together in the same small boat, or perched precariously in trees or on rickety, makeshift structures.

"Hopefully, highlighting those statements, highlighting what they're saying, people can look at it and analyze it and see is this valid, is there truth to it, do we need to address this issue," Blade said.

Blade's hope is for "lasting change and seeing both sides of the story," he said. "Seeing of course there are good officers and in some cases, issues with brutality."

Blade's paintings are titled "The Unheard, Indy's Response to Injustice."

The works are part of three new shows to be featured at The Harrison Center when it reopens July 3.