A family of fans cheer for Colts usher stricken with cancer

During the off-season, Kevin Martin learned he has stage 4 cholangiocarcinoma, which is cancer of the bile ducts. 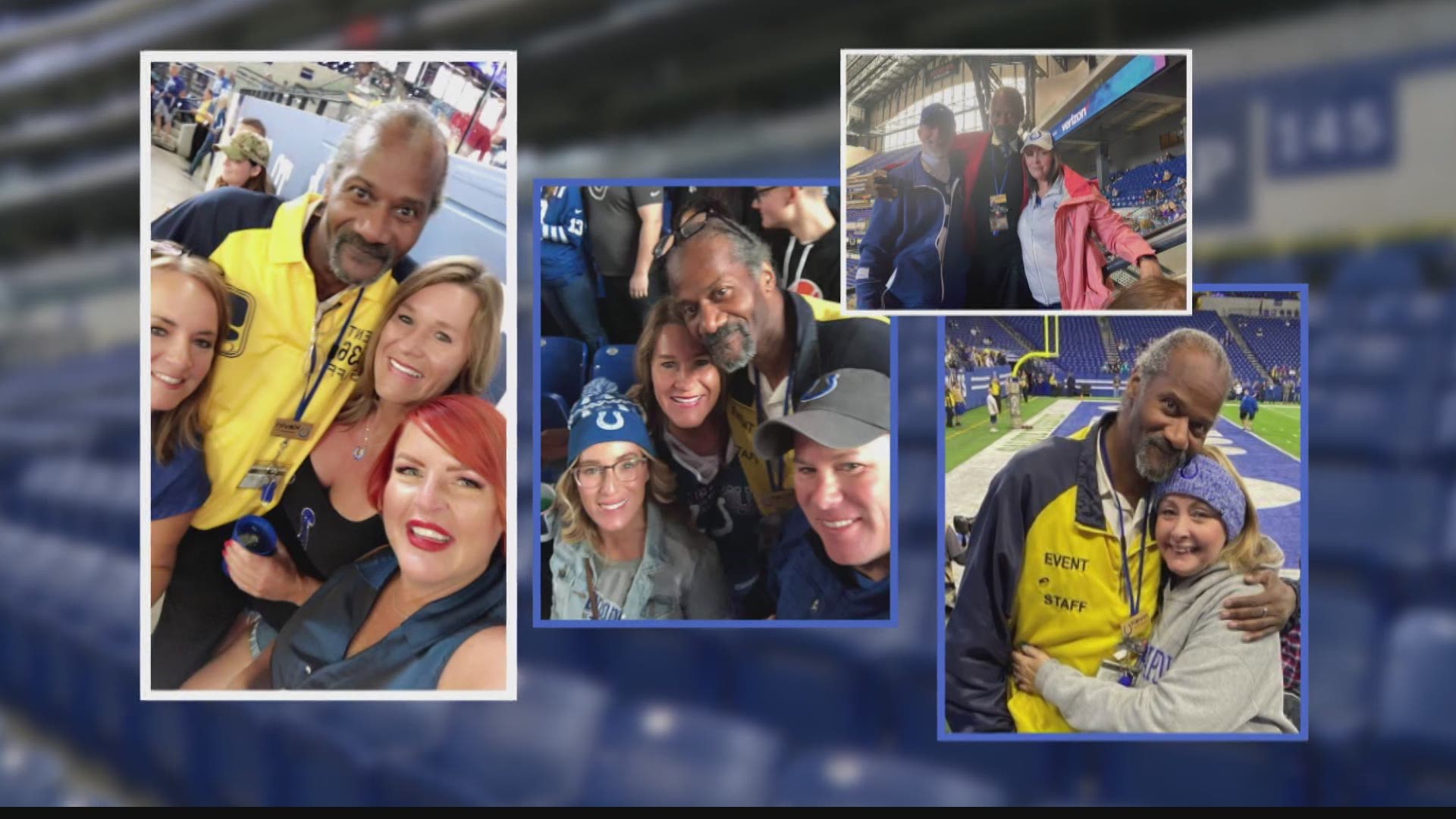 INDIANAPOLIS — Seeing a Colts game in person attracted Kevin Martin to apply for a security position at Lucas Oil Stadium years ago. He was assigned to work as an usher in Section 144 near the north end zone in 2011 and never left, because somewhere amid all the football fanfare, Martin found a new family.

“I just love it because I've met a lot of wonderful people there,” Martin said. “It’s like we just became a family in the area and a lot of my season ticket holders tell me you can't miss a day.”

When regulars arrive, they know exactly where they will be sitting, who will be next to them and who serves as the ringmaster for their area.

“When we go to the games, it not just to go see the Colts, it's to see Kevin, it's the first thing we do, we find Kevin, we hug him, everybody in my group, everybody in our section, everybody knows him,” said Candace Robinson.

Robinson has hosted Martin at her home to celebrate Christmas. Rick and Joanie Stewart took Martin out for dinner.

Melissa Holderman of Louisville fondly remembers how Martin would let her 10-year-old son Blake sit closer to the action if there was an empty seat. Now Blake is a man, and Martin is part of her inner circle.

“He is part of our family and family to Kevin is very important. We love him. We care about him,” Holderman said.

This summer, during the off-season, Martin received really bad news about his health. He has stage 4 liver cancer called cholangiocarcinoma, which is cancer of the bile ducts.

When his fan family learned of the diagnosis, they set up a GoFundMe account. Almost immediately, an anonymous donor gave $10,000.

“It's just that they had enough forethought and love in their heart to want to set this up for me was really overwhelming for me,” Martin said. “They didn't have to do it, but they saw fit to do it. Whoever the person is, I appreciate it, I thank you for it and you touched my heart in a way you will never know.”

Kevin plans to use the money to pay for rent, transportation to treatment and food as he waits for Social Security benefits that he was told may not be approved until the end of the year.

Steward and fellow fan Mike Bostic said setting up the fund was “a no-brainer” and they hope it helps Martin focus on his health and not worry about working for a paycheck.

“I have the utmost gratitude to you all for doing what you're doing for my brother, I really appreciate that” said Twyiana Sebree.

The Colts organization is aware of the positive impact Martin brings to the fan experience. They’ve named him one of their “Memory Making Players” and his boss at CSE security is holding a position for him for the upcoming season.

“We want him back. He has said he's going to be back. He will be in Section 144-145, we are not moving him. He’s not going anywhere,” said Miquel Correa of CSE Indianapolis.

That’s a promise the fans appreciate.

“The Colts games just aren't the same when Kevin's not there,” Joanie Stewart said.

And if working the game is too much, Martin’s fan family is happy to share their seats.