A serious crash when he was a teenager made a lasting impact on Dr. Ryan White. 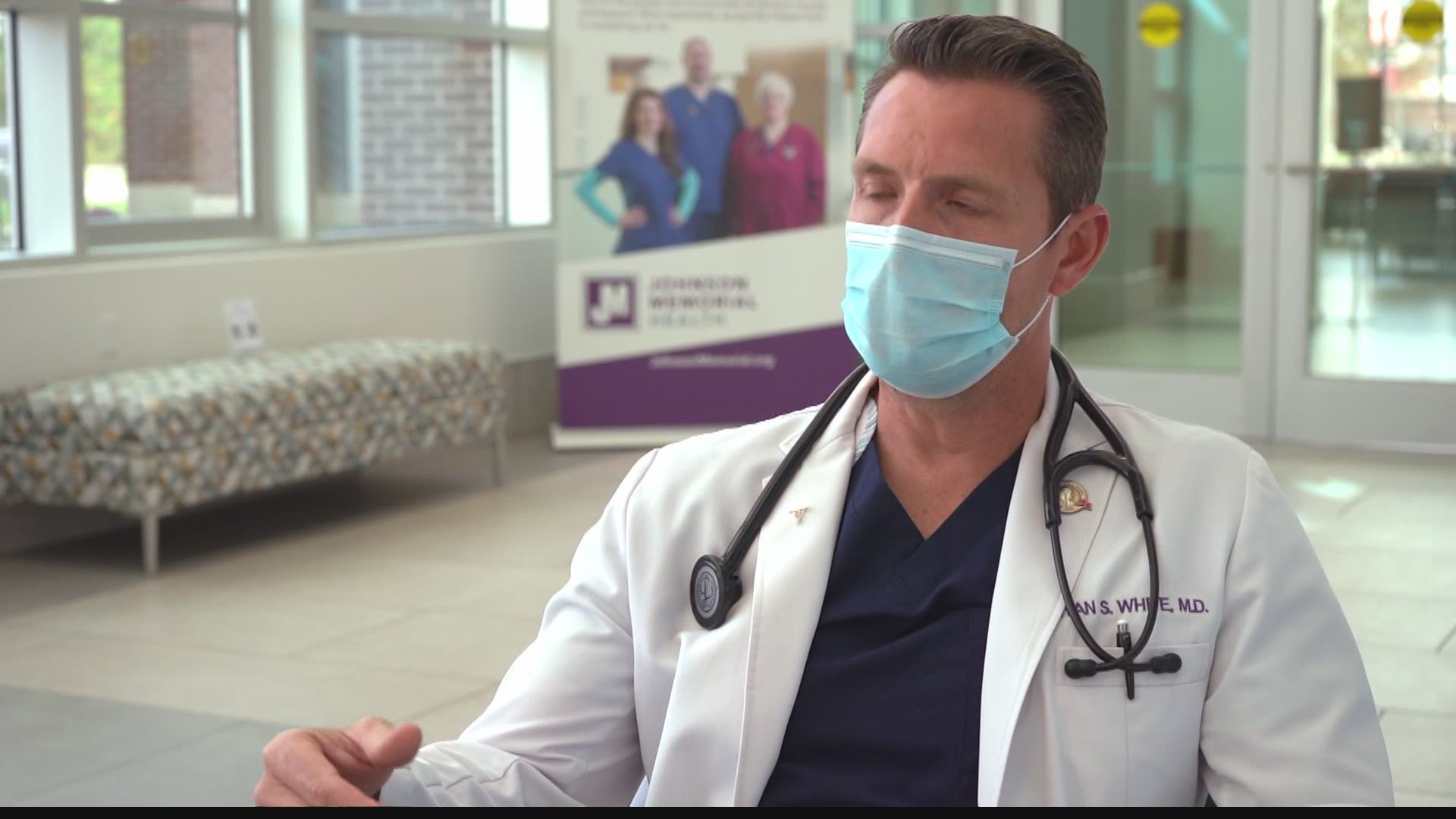 FRANKLIN, Ind. — The night the car Ryan White was traveling in collided with a semi changed his life in many ways.

Sitting in a chair near the emergency room entrance of Johnson Memorial Hospital, Dr. White shared the details of what happened to him as a teenager.

“A semi (truck) pulled out in front of us, and we were traveling at a high speed and we went under the semi and actually got stuck under there and I wasn’t responsive at the scene,” said White.

He said it was the care that he received from healthcare professionals who guided him back to a full recovery that inspired him to become a doctor.

“I don’t know that I recall a specific interaction with a specific provider, or nurse, or physical therapist. What I do know is that compassion was something that spoke to me,” said White.

White said the emergency room prior to the pandemic was unpredictable and that there was an adrenaline rush with that that he enjoys.

“Patients come in with belly pain, chest pain, short of breath, maybe a fall with head injury, or a kid with broken arm, it’s a big variety,” said White.

Normally, pre-pandemic, “we get a lot of people with respiratory illnesses, lung disease, COPD, asthma, emphysema, and you turn them around and they get better. But with COVID, we didn’t see that. We’re seeing something we hadn’t seen before with lung disease,” said White.

But he said COVID-19 is much more than just a disease that affects the lungs.

“Early on we were seeing patients with kidney failure, some have blood clots in the lungs, heart attacks, it definitely affects multiple organs,” said White.

The spring marked the first peak of the virus that causes COVID-19.

During the spring, White said he “was a little paranoid and I think we (healthcare workers) all were. We all got home and said, ‘Do I hug my kids or do I not? Do I hug my wife or not? Is me getting rid of my scrubs in the garage before I go in the house is that enough?’”

“Those were all things that went through our (healthcare workers) heads,” he said.

He said that while the “paranoia has settled (since the first peak) because I feel more comfortable with our (new) lifestyle,” it was far from the last peak.

“We’ve seen a peak in April. We saw a peak in July. And we’re in a peak now and this is the biggest peak,” said White.

White said there are less ventilated patients now than there were in the spring and it’s because the public knows more about how to slow the spread of the SARS-CoV-2 virus by social distancing, wearing masks and hand washing.

White said it’s important to adapt to our new normal as a society.

“COVID isn’t going away. It may be around for years,” said White. “Life is going to be different, it doesn’t have to be worse, but it’s going to be different (and) the sooner we get to that point of (accepting this) the less uncomfortable we will be about doing things that feel unnatural."

Part of society’s new normal is that healthcare heroes remain on the front lines.

“There are so many times I feel incredibly lucky to be able to do what I do,” said White.

He said that he’s not a hero.

“We’re just doing our job and we hope that we do it well," he said.