5 killed, 4 injured in shootings during violent Labor Day in Indy

Five people were killed in Indianapolis in just four hours on Labor Day. Throughout the day, a total of four other people were injured in shootings across the city. 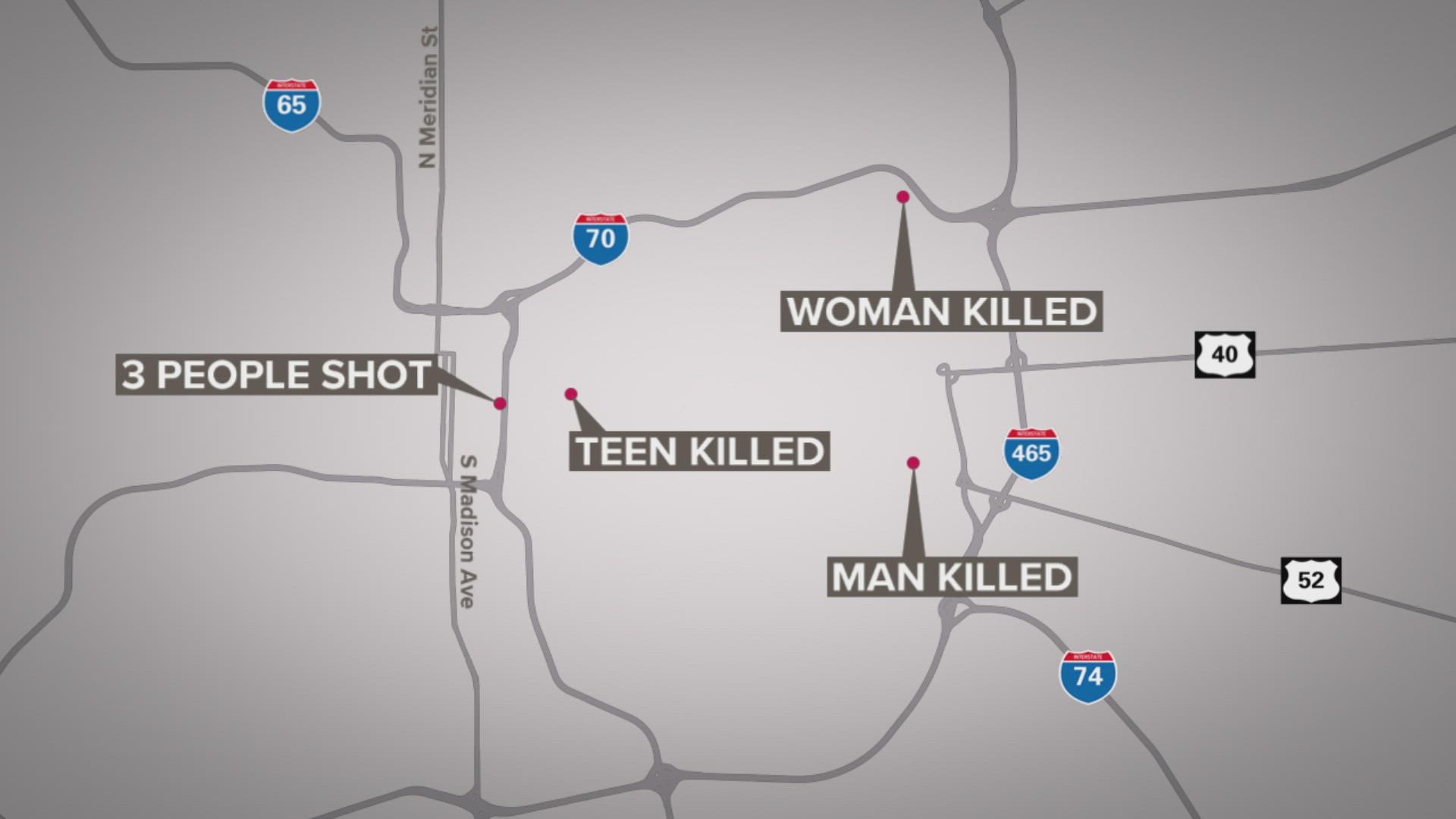 INDIANAPOLIS — It was a violent Labor Day in Indianapolis with five people being shot and killed in the city in a matter of four hours.

The first shooting happened at 3 p.m. on the east side of Indianapolis.

RELATED: Woman dies after shooting on Indy's east side

Police were called to the 6500 block of East 25th Street, near Windsor Village Park. When they arrived, they found a woman who had been shot.

She was taken to IU Health Methodist Hospital in critical condition but later died from her injuries.

Less than an hour later, there was another shooting near downtown Indianapolis that left two people dead and one other injured.

Police said the shooting happened near the intersection of Washington and Davidson streets around 3:30 p.m.

Medics pronounced one person dead at the scene. Another person was transported to Eskenazi Hospital in critical condition and died Sept. 14 from their injuries.

A third person arrived at Community East Hospital with a gunshot wound to the arm and is in stable condition.

After a preliminary investigation, police believe the victim at Community East is also connected to the incident at Washington and Davidson streets.

Thirty minutes later, a teenager was killed in a shooting on the east side of the city.

The shooting happened around 4 p.m. near Washington and Randolph streets. The teen was taken to a local hospital and died shortly after arriving.

The fourth fatal shooting happened around 7 p.m. on the far southeast side of Indianapolis.

Police were called to the 800 block of South Pasadena Street in the East Indy Mobile Estates neighborhood where they found a man who had died from a gunshot wound.

Three more people were injured in separate shootings throughout the day on Labor Day.

The first was just after 1 a.m. in the 5400 block of Fetterbush Lane. IMPD said when officers arrived, they found a person suffering from a gunshot wound. Police said the victim was awake and breathing but didn't give any further information on their condition.

At the end of the day, two more people were shot.

One person walked into Community North Hospital shortly after 10:30 p.m. with a gunshot wound. They were reportedly awake and breathing, but police didn't give any more details on their condition.

Another person was shot on the near west side in the 3800 block of West Michigan Street around 11 p.m. This victim was also reported awake and breathing.