Dubbed the "Comeback Queen," Sarah Bacon is closing in on a trip to Tokyo for the Summer Olympics. 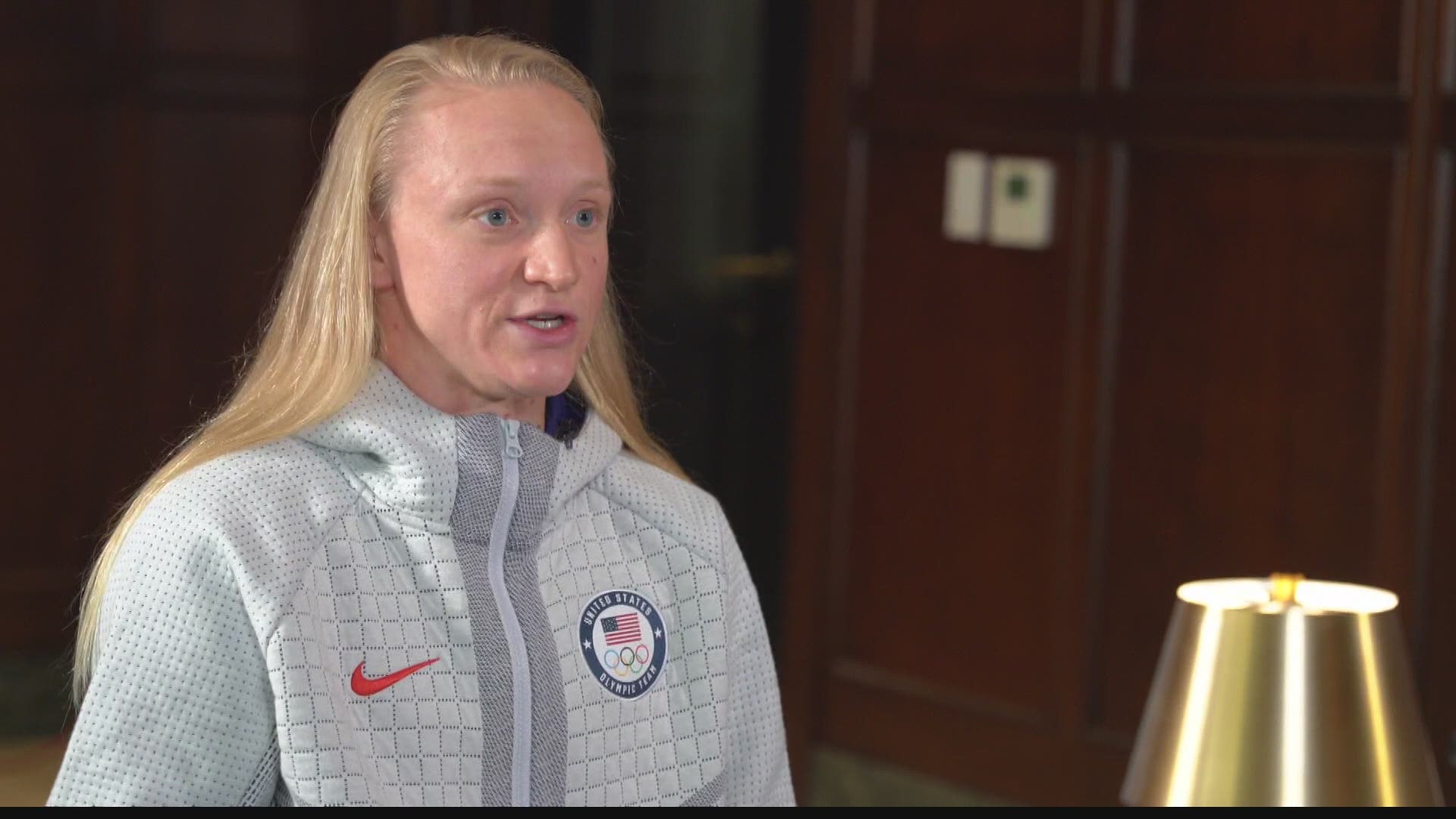 INDIANAPOLIS — Sarah Bacon's Olympic dreams are closer now than they've ever been. The Indianapolis diver started in the sport 16 years ago.

Though she's shown promise from the start, she's also faced a series of injuries that threatened her diving career.

But now, at 24, she's healthy and is half of a promising synchronized three-meter pairing and, when injury-free, is capable of a podium finish in Tokyo this summer. Her partner is Olympian Kassidy Cook, they call themselves #CooknBacon.

"We're so new to synchro. We've only been doing it for about a year-and-a-half now. So actually this extra year of having to train together has helped us and we're starting to look really good and there's been a lot of talk about us being on the podium for synchro," Bacon said.

They performed a list of seven dives together over the week at the FINA World Cup in Tokyo and successfully earned a spot for Team USA.

"It's 90% mental, 10% skill is what I would say. If your mental game isn't strong in this sport, you're gonna fall apart and crumble," Bacon said.

Bacon is hyper-focused. She has endured plenty to be in this position.

"I've dealt with injuries my whole life. I fractured my back four times in high school, I had two concussions, Achilles tendon, and then my freshman year of college I went... I had two shoulder surgeries," Bacon said.

Her peers called her the "Comeback Queen" because she always returned and didn't quit. But she thought about it often.

"I think after my fourth fracture of my back, I just wanted to be done, I was, like, I'm so sick and tired of being out of the water for six months and coming back being scared to re-learn all my dives after not doing that for six months. And I was, like, mentally, I just like don't think I can do this anymore," Bacon said.

Bacon is a graduate of Cardinal Ritter High School. Her multiple state championship banners still hang in the gym and her many awards are on display. Sarah credits her parents for encouraging her to dive at the collegiate level.

"They're great. They're, like, 'Well, maybe like when you finally go to college, it'll get better and you'll like find that spark for diving again so, just give it a try in college, and then we can see where to go from there,'" Bacon said.

"Our relationship is amazing. I could not ask for a better coach than him," Bacon said.

Her physique changed dramatically during her time in Minnesota.

"Freshman year of college, it was brand new to me. I would eat whatever I wanted, drink whatever I wanted, and then Wenbo kind of sat me down and had a serious talk with me and was like 'if you want to be good at this sport, and reach your full potential, you're going to have to change something' " Bacon said.

She committed to cardio every day, lifting heavy weights and diving three hours a day, sometimes posting videos of her rigorous workouts online.

"I think I ended freshman year weighing 156 pounds, and now I weigh 120 pounds, so it's about a 35-, 36-pound difference from my freshman year to now, which has really improved my diving. I'm spinning fast and making dives way easier my entries are cleaner because of it," Bacon said.

RELATED: 100 Days Out: Here are the Hoosier athletes with a shot at the Olympics in Tokyo

During her junior year, Bacon was named the 2019 Big Ten Diver of the Year and the NCAA one-meter diving champion and her international diving career took off.

Later that year, she and partner Brooke Schultz earned silver in the three-meter synchronized event and earned gold in the women's individual one-meter event at the 2019 Pan Am Games in Lima, Peru.

"One interesting fact actually is that I hate being wet. The first dive of every practice is like the worst part of my day, just because I had to get in and get wet," Bacon said.

Sarah is a college senior, balancing her finals with the training required to make the Olympic dream that started when she was just eight years old come true.

"I keep getting asked questions about grad school and what I'm doing next year and I'm like, 'Just let me focus on the Olympics and get through it, and then I'll worry about worried about that then,'" Bacon said.

To get to the Olympics in July, Cook and Bacon have to top other American pairings at the USA Diving Olympic Trials at the IUPUI Natatorium in June. Cook competed in Japan with a shoulder injury, withdrew from the individual competition and returned to the U.S. early. Her recovery timeline is to be determined.

With Cook injured, on the third day of the FINA World Cup Trials this week, Sarah Bacon and Samantha Pickens competed for the two Olympic quota spots in the women’s three-meter individual event. The duo qualified for finals by finishing second and eighth, respectively. Bacon ended up winning the silver behind China’s Yiwen Chen. Her medal marks the first time in over 30 years that a U.S. female has medaled in the 3-meter springboard at a World Cup.

Pickens originally traveled with the team as a reserve, in the event that any divers were unable to compete in events for the U.S.

"I am extremely proud of how all of our athletes performed," said Dan Laak, high-performance director for USA Diving. "Sarah and Sam knew what was at stake and they put their heads down and got the job done beautifully."

The divers who will represent Team USA at the Olympics in Tokyo will be named at the conclusion of the Olympic Trials at the IUPUI Natatorium in June.