Conservationists are worried about the virus spreading among wild great apes, but aren't currently planning a vaccination campaign. 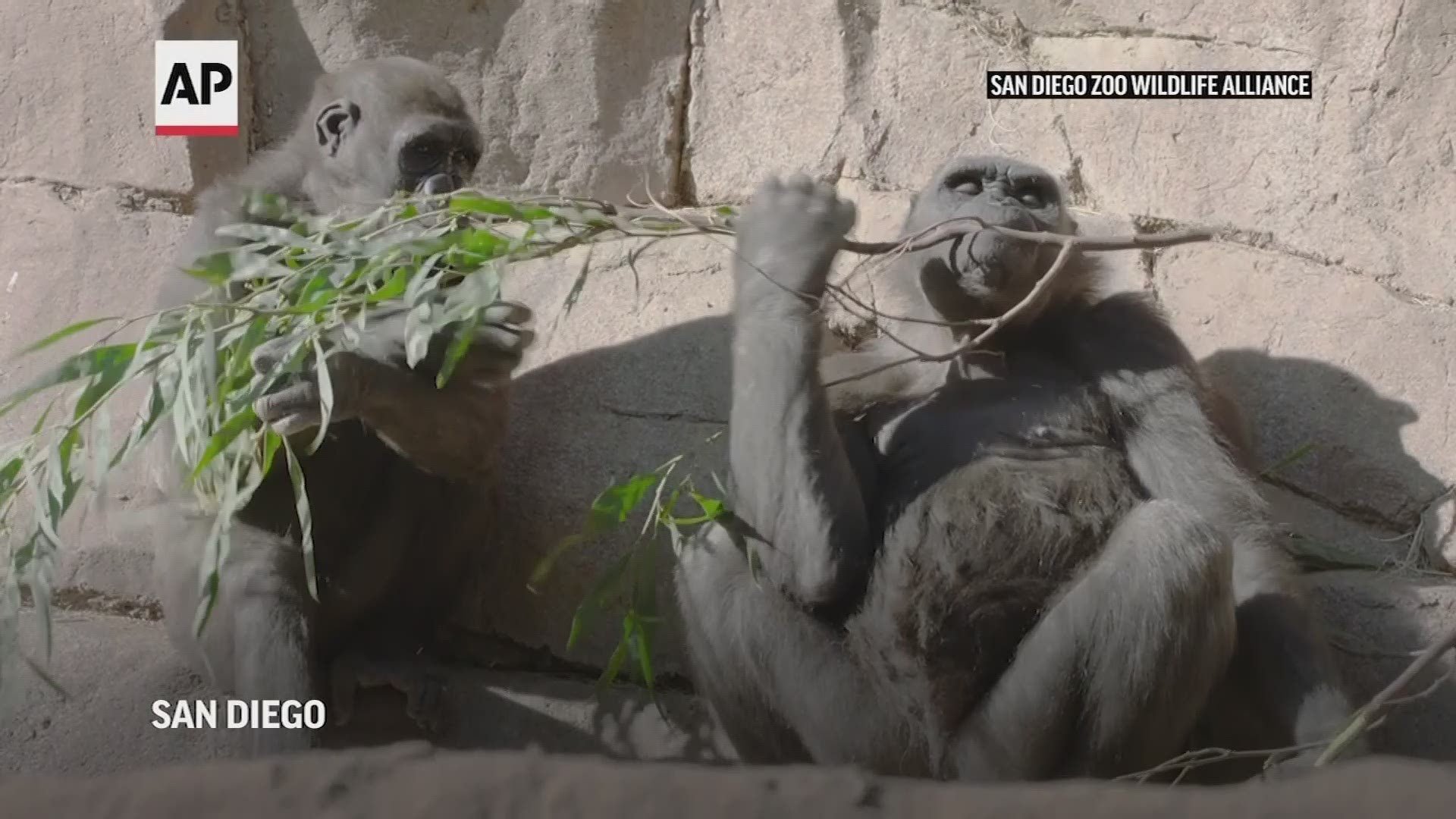 SAN DIEGO — The coughing among the western lowland gorillas at the San Diego Zoo Safari Park in January was the first warning sign. Soon the fears were confirmed: A troop of gorillas became the first apes known to test positive for the coronavirus.

Around the world, many scientists and veterinarians are now racing to protect animals from the coronavirus, often using the same playbook for minimizing disease spread among people: That includes social distancing, health checks and, for some zoo animals, a vaccine.

Karen, a 28-year-old orangutan, became the first ape in the world to get a coronavirus vaccine on Jan. 26 at the San Diego Zoo.

Karen has received two shots of a vaccine from Zoetis, a veterinary pharmaceutical company in New Jersey, and has shown no adverse reactions. Since then, nine other primates at the San Diego Zoo have been fully vaccinated: five bonobos and four orangutans. Four more animals — one bonobo and three gorillas — got their first shot this month and will get a second one in April.

“I was really convinced that we wanted to get that to protect our other great apes,” said the zoo’s wildlife health officer Nadine Lamberski, who explained she felt urgency to act after the eight gorillas fell sick.

RELATED: Scientists focus on bats for clues to prevent next pandemic

That virus outbreak was linked to a zookeeper who was infected but had no symptoms. Seven gorillas recovered after a mild cases of sniffles, but one elderly silverback had pneumonia, likely caused by the virus, as well as heart disease. He was put on antibiotics and heart medication, and received an antibody treatment to block the virus from infecting cells.

About three dozen zoos across the United States and abroad have put in orders for the Zoetis vaccine, which is formulated to elicit a strong immune response in particular animal species.

“We will jump at the opportunity to get the Zoetis vaccine for our own great apes,” said Oakland Zoo’s veterinary director Alex Herman, who is ordering 100 doses.

Zoetis got a permit from the U.S. Department of Agriculture to provide the doses on an experimental basis to the San Diego Zoo. The company will need to apply for the same permission to provide vaccine to additional zoos.

Scientists believe the coronavirus likely originated in wild horseshoe bats, before jumping — perhaps through an intermediary species — to humans. Now many researchers worry that humans may unwittingly infect other susceptible species.

Credit: AP
In this Monday, Feb. 8, 2021, file photo, a visitor with a mask observes an orangutan in an enclosure at the Schoenbrunn Zoo in Vienna, Austria. (AP Photo/Ronald Zak, File)

“Right now, humans are the main vectors of SARS-CoV-2, with consequences for many animal species,” said Arinjay Banerjee, a disease researcher at McMaster University in Canada.

Great apes such as gorillas, which share 98% of their DNA with humans, are especially susceptible, as are felines. So far, confirmed coronavirus cases include gorillas, tigers and lions at zoos; domestic cats and dogs; farmed mink, and at least one wild mink in Utah.

Scientists have also experimentally shown that ferrets, racoon dogs and white-tailed deer are susceptible, although pigs and cattle are not.

“This could be a conservation concern, especially if the virus began to spread in a wild species with extremely reduced populations, like the black-footed ferret,” which is endangered, said Kate Langwig, an infectious disease ecologist at Virginia Tech.

Another worry is that virus spread among other species could produce new variants, complicating health authorities’ efforts to curb the pandemic.

In Denmark, workers at a mink farm accidentally infected the animals. As the coronavirus spread among the mink, it mutated — and human handlers contracted the new variant. In response, the government ordered millions of mink to be killed.

RELATED: Mink culled to minimize coronavirus risk to humans 'pop up' after burial in Denmark

“Mutations happen when there’s a lot of disease transfer going on between animals,” said Scott Weese, a veterinary microbiologist at the Ontario Veterinary College.

Since the outbreak, the San Diego Zoo and its safari park north of San Diego have installed more fans at its indoor primate areas to increase air circulation. The staff wears double masks and face shields and limits their time indoors with animals.

Scientists and conservationists who monitor wild primates have also adapted their daily routines.

“Covid-19 has been a wake-up call for the world about the fact that these viruses can go from wild animals to people, and from people to great apes,” said Kirsten Gilardi, executive director of Gorilla Doctors, a conservation group that includes field veterinarians who treat wild gorillas in Rwanda, Uganda and the Democratic Republic of Congo.

There are only about 1,000 wild mountain gorillas, so the threat of coronavirus infection “has changed the way we do our work,” said Felix Ndagijimana, the Rwanda country director for Dian Fossey Gorilla Fund International, a conservation group.

For the past year, field trackers who check on gorillas daily in the rainforest first get a coronavirus test, then stay with other trackers in an encampment for work stints of several weeks. This is to ensure that they don’t pick up the bug by returning to their villages at night.

“It was really a big ask of our team, especially during the pandemic. People want to be close to their families, but also keep the gorillas safe,” said Ndagijimana. To date, he said, there have been no coronavirus cases among wild gorillas.

While some wild gorillas were vaccinated against measles in the 1980s, there are currently no plans to vaccinate them against the coronavirus. With wild apes, the first choice is always to be as hands-off as possible, said Jean Bosco Noheli, a field veterinarian for Gorilla Doctors in Rwanda. “Let’s focus on other measures we can take first to protect wild gorillas,” he said.

But more zoo animals could soon be getting virus shots.

“There’s a lot of interest,” said Sharon Deem, a veterinary epidemiologist at the St. Louis Zoo who is also part of a hazard preparedness group of the Association of Zoos & Aquariums that represents 240 zoos.

“I think given how horrible this particular pathogen has been to humans, and that we know it can be transmitted between humans and animals, that there is great interest to use an animal vaccine as soon as it is available,” she said.