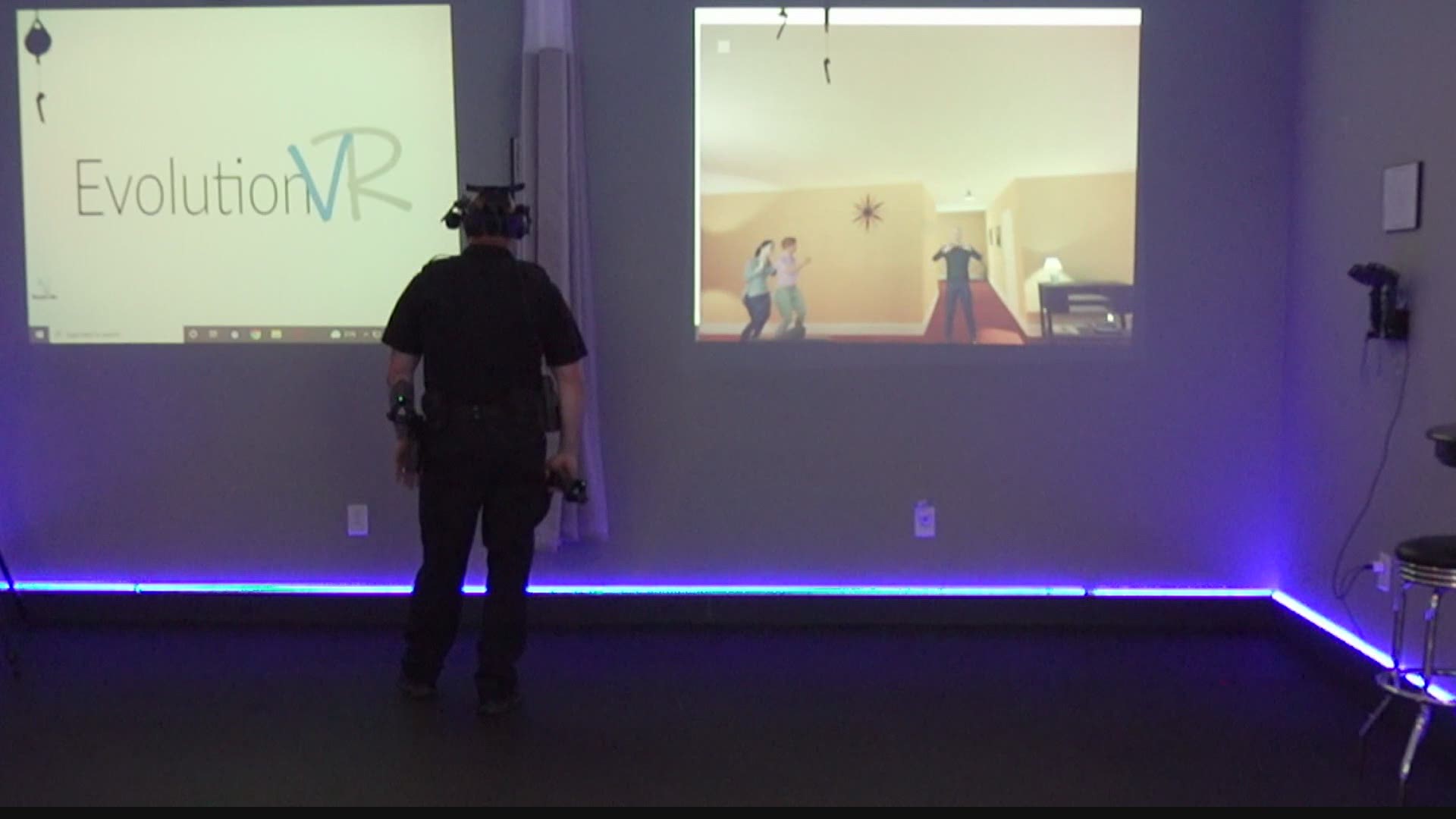 GREENFIELD, Ind. — A central Indiana police department is using virtual reality to learn more about what it really takes to de-escalate dangerous situations.

The Greenfield Police Department teamed up with the company Evolution VR to help officers make better split-second decisions for their safety and that of the public.

Veteran officer Capt. Chuck McMichael oversees the patrol division at the Greenfield Police Department. He is always concerned about the safety of officers who respond to 911 calls, knowing a "routine" call could be anything but. In most cases, their goal is to have a backup for each officer responding to a disturbance call.

"This is going to be a game changer for us. We ran our officers all through nine scenarios in a short period of time," McMichael said.

The virtual reality de-escalation training is as close as it gets to the real thing for officers, including Deputy Chief Brian Hartman. He is another veteran at GPD but continues to learn new policing techniques to add to his years of training and experience. He considers each call they respond to as unique as the person who called for help, even if it's someone they've heard from in the past.

"When we respond to a call for help from people, we have to keep in mind that the situation may be the worst day of their life, and respect the fact that they need our help," Hartman said.

This new virtual reality training is now mandatory for every Greenfield officer.

"It's as real as it gets without walking into a room and having live people in there doing it," Hartman said.

The training takes place at Evolution VR studio in Greenfield. The studio is setup with multiple training booths where participants wear goggles that give them much more than a three-dimensional view. The audio for each scenario is also played through the goggle headphones. The simulator puts Hartman in different scenarios where he's instructed to de-escalate.

"Ninety-five percent of what we do is talk to people," McMichael said.

But the trainers at Evolution VR can increase the danger, like when an angry man threw a lamp at the police, as in Hartman's case.

"When he picked up the lamp and threw it, I felt myself jump and move, saying 'okay this lamp is coming at me,'" said Hartman.

The training comes after lawmakers passed House Bill 1006, which makes de-escalation training mandatory for police departments. There are scenes to fit almost every situation officers face on a daily basis. The list of virtual reality skits includes traffic stops, domestic violence calls, crowd control, bar fights and rescue scenarios, along with less-lethal simulations. However, many of the scenarios start with giving officers practice on de-escalation techniques. When an officer knows how to verbally calm people who are upset, it can change the outcome of his or her 911 call response dramatically.

"The people who are irate and upset, that's not everyone, but those people we do encounter on a daily basis, and they do not want to hear one thing that we have to say," Hartman said.

The virtual reality training is not only life-like but has already proven cost-effective for the Greenfield Police Department. This kind of training would normally take place once a year, requiring schedule changes, travel time and even training equipment, along with extra personnel.

"Theoretically, we could do this once a month for a lot less than it would be to do that field day every year," Michael said.

The Greenfield Police Department is not only saving money using virtual reality training, but more importantly, it is possibly saving lives.

Every officer at the Greenfield Police Department is being put through virtual training. The life-like scenarios force the officers to make split-second decisions. The goal is to use de-escalation verbal commands and conversation to calm emergency situations. The virtual simulation trainers, however, can increase the danger to mimic what happens during real-life 911 calls.

"It's not always this way. There are a lot of calls you go to you can talk your way out of it and that's the way we as officers want it," Hartman said.