The parade finished with laps around Monument Circle Sunday evening. 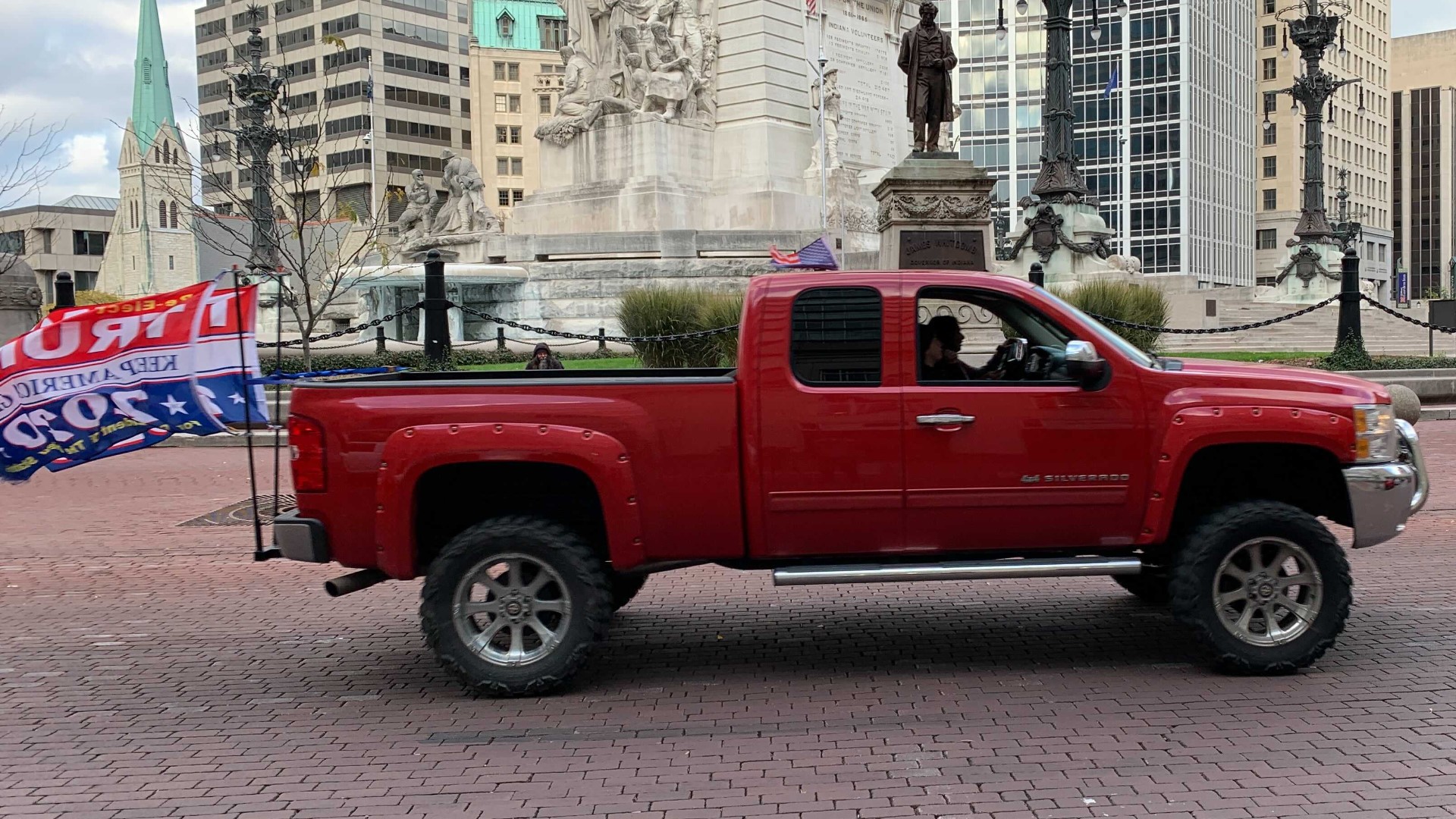 INDIANAPOLIS — President Trump supporters went for a Sunday drive on Interstate 465, taking a lap around the Indianapolis beltway before heading downtown. The parade finished with laps around Monument Circle.

Most of the vehicles participating were big trucks and SUVs with big banners for Trump and American flags waving behind them on a windy day.

"It's been peaceful,” Cora Tam, a Trump supporter from Franklin, Indiana, said. “It's been quiet. We had a few people that wanted to give us the finger or thumbs down. But I just show them some love [making a heart shape with her hands] and wish them the best of luck. Go vote!"

On Monument Circle today during Trump parade with Indiana license plate. In my story tonight at 11 pm on @WTHRcom. pic.twitter.com/YqoVL6kEys

One dissenting driver showed not all trucks are for Trump. A pickup with a Biden decal covering the back window and flags waving took laps among the many Trump supporters.

One man stood alone on the Soldiers and Sailors Monument waving a Black Lives Matter flag as vehicles passed by.

Two days before the presidential election, voters on both sides have concerns about how America will deal with the results.

"I hope we accept the way the election comes out,” Floyd Root, a Trump supporter who drove in the parade with his family, said. “I mean that would be grown-up Americans to do so. But there will be some that want to do the unrest. I think it's going to be that way either way it goes."

"Especially during this year, there's been a lot of police brutality and race wars and stuff like that,” said 18-year-old, Asaiah Turner, a first-time voter Sunday at the City County Building a few blocks away. “My concern is that if it doesn't go the way that most people have wanted it to, I'm afraid that we will be in danger, especially my generation."

20 minutes or less to #vote tonight at the City-County Building. Open until 9 pm. No satellite locations open in #Indy Monday, but CCB early voting 8 am -12 pm. 187 polling locations on #ElectionDay pic.twitter.com/D1GQwZLEu7

Marion County voters finally found some relief from long lines. Some cast their ballots in less than 20 minutes Sunday night at the City-County Building.

"I started out last Sunday to come here to vote,” Mary Jackson said. “But I couldn't find a parking space. So, I didn't come back until today, because I had to vote. It's a pretty serious time now."

Satellite early voting is over now in Marion County.

Early voting Monday will be at the City-County Building only from 8 a.m. to noon. On election day, Marion County residents can cast their ballot at any of 187 voting sites across Indianapolis.