Every time Michelle Prater takes a breath, her windpipe and bronchial tubes collapse and she feels like she is choking. 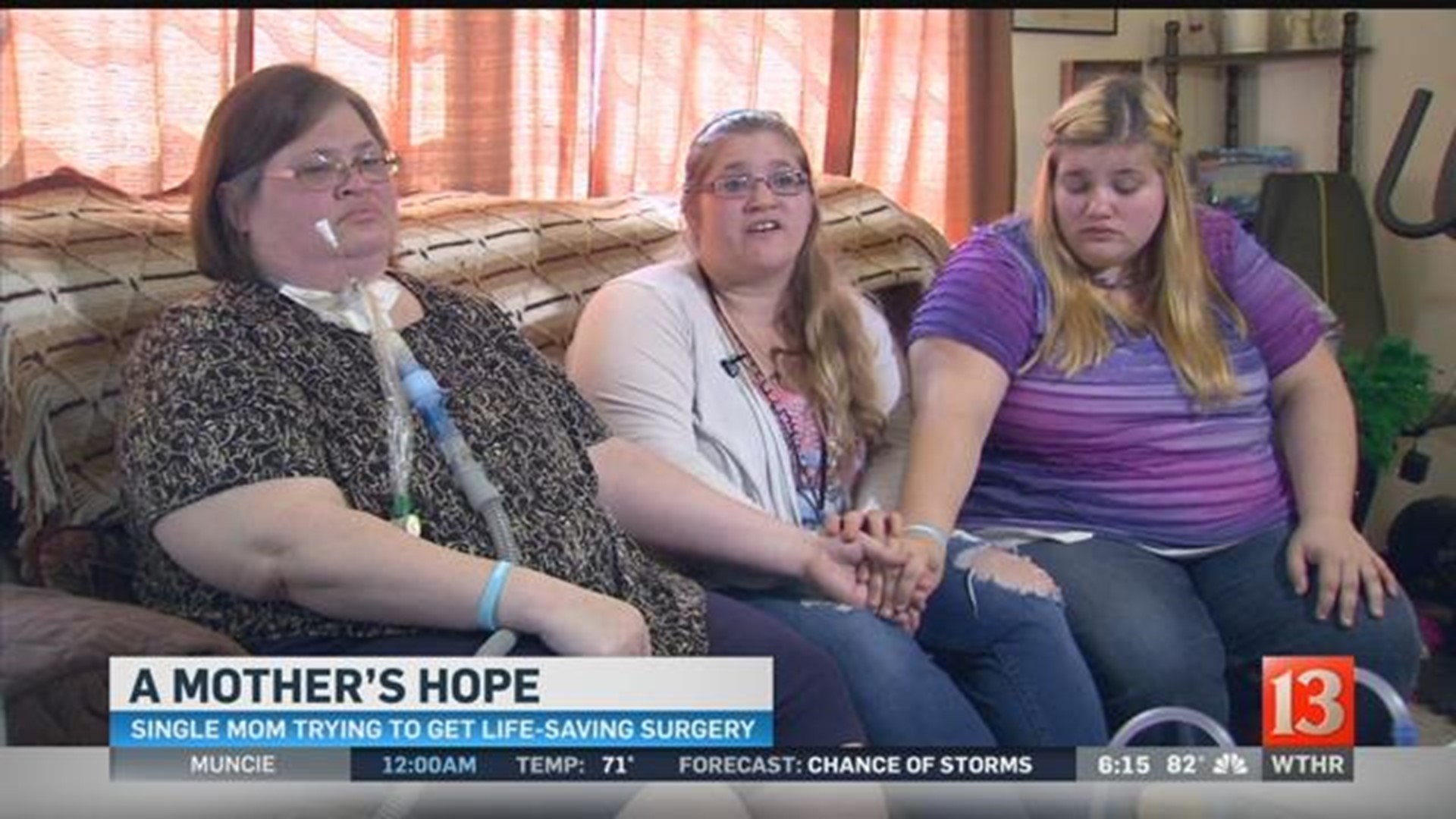 Every single breath is a fight to stay alive for Michelle Prater.

"I forgot how it really is to breathe," said Michelle.

Her voice is just above a whisper as she struggles to get the words out through her tracheotomy.

"I mean, it's just, I fight. I really do. I fight just to breathe," she said, before collapsing into a fit of coughing and gasping, her face turning purple, her body wracked by the force of her coughing.

Even laughing is out of the question for Michelle. The very act, could be her last.

"I start choking and then right away I pass out," she explained. "You wouldn't think, you know, you take something from life like laughing for granted. I mean, who would ever think that no one would be able to laugh?"

That's just where this single mom from Noblesville finds herself.

She's hooked up to a ventilator almost 24 hours a day because of an extremely rare condition that effects only one in several million called TracheoBronchoMalacia - or TBM.

Every time Michelle takes a breath, her windpipe and bronchial tubes collapse and she feels like she is choking.

"She's gasping for air and it's just one of the scariest things," said Michelle's daughter Jenna.

Jenna, 24, has spent the past two years caring for her mother around the clock in their tiny mobile home.

"We've already almost lost her a few times," Jenna explained, saying she's had to save her mother's life several times when she's stopped breathing and collapsed. "Everything just turns black and she falls."

Michelle's youngest daughter Elissa works full-time at Kroger to help with bills. She dropped out of school at IUPUI in March because she couldn't juggle her studies, work and her mom's illness all at the same time.

"A lot of nights, I stay sitting up thinking about what if this is the last time I see my mom," said Elissa, hugging Michelle close, the tears streaming down both of their faces.

Sometimes, it's overwhelming for these young women to watch their mother suffer.

"You can only take so much and I just want more than anything for my mom to breathe," said Jenna.

A highly risky surgery on Michelle's windpipe may be the miracle for which this family is looking.

They're headed to the University of Cincinnati Medical Center June 7 to find out if doctors there have one to give them.

"If I don't make it through this surgery, then at least I know, I've tried everything. I've given everything I've got," said Michelle.

Already, though, the Prater's don't have a lot to give. Their 14-year old mini-van is on its last legs, their home's central air conditioner is broken, making it even harder for Michelle to breathe in the heat.

Adding to their financial uncertainty, the Praters aren't sure what insurance is going to cover. Even if it takes care of all the medical bills, the girls still have to figure out how to afford staying in Cincinnati, eating and getting back and forth to the hospital to be with Michelle.

All of those concerns seem secondary, though, each time Michelle fights to take a breath.

This mother's will to survive and her love for her children seem take over, when it seems Michelle just doesn't have even one more breath to take.

Her friends have set up a GoFundMe account to try to help the family.