Newlyweds reoutfit school bus to be home on wheels

A couple in Fishers is preparing to put their house on the market and live on a school bus with their dog, who’s appropriately named Trip. 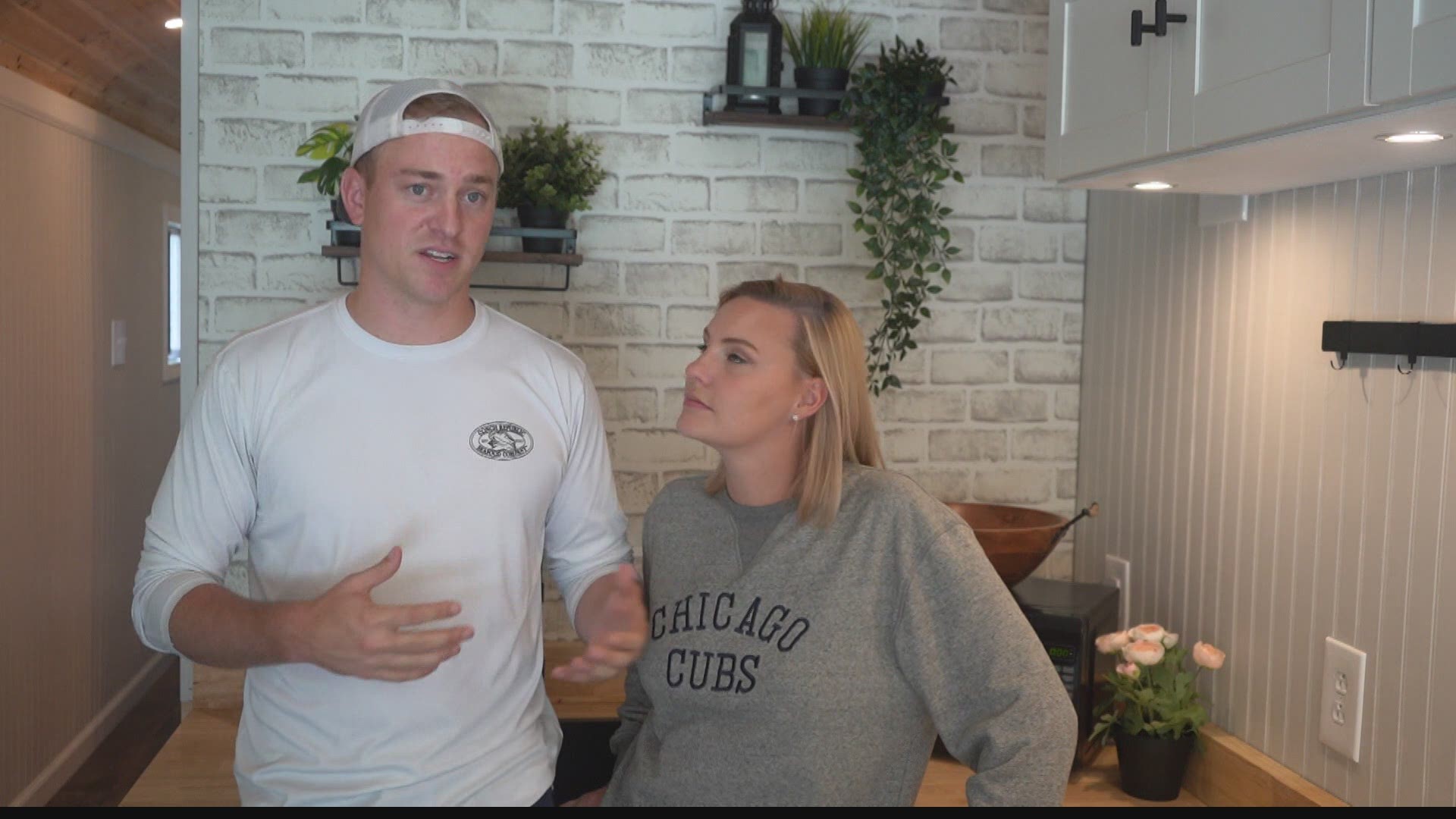 FISHERS, Ind. — A Fishers couple has refitted a school bus to become a home on wheels and they plan to document their road trip across the country on both Instagram and YouTube.

Naomi and Kyle Thacker are newlyweds with an adventurous spirit.

“Naomi and I like to go on a lot of trips and when we go on trips we like to go to interesting Airbnb-like tiny homes or treehouses,” Kyle said.

Their trip to Asheville proved to be more than just an adventure.

“We found a school bus that was an Airbnb in the middle of the woods,” said Kyle. He joked that it sounded like the beginning of a horror film.

But their stay was anything but horrific. Instead, it was magical.

"We were just giggling through the whole experience, like, 'We’re on a school bus in the middle of nowhere,'” said Kyle.

Then there was the Netflix documentary.

“It was called 'Expedition Happiness' and it’s this German couple that flies to America and they buy this bus and retrofit it, and drive through America,” said Kyle.

He added that many Americans forget how beautiful and large the country is and that as a couple they wanted to explore the U.S.

So, Kyle told his wife he wanted to build a "skoolie," a school bus that is retrofitted to become a house on wheels.

“I initially thought it was an idea and it would just die down over time and then he was like, 'I found a bus. You need to take off work. We need to go get it,'” said Naomi.

Credit: The Thacker Family
A Fishers couple has refitted a school bus to become a home on wheels and they plan to document their road trip across the county on both Instagram and YouTube.

Neither of them had a background in building or decorating when they decided to take on the project.

“Absolutely not,” said Naomi, as both she and her husband shook their heads. “I knew how to use a hammer and that’s about it."

So for about $4,000, they bought a school bus that was stripped and had a ceiling that was raised about 25 inches.

Kyle said the raised roof was important, since his wife wanted a shower on the bus and he is 6-foot-5-inches tall.

The Thackers said communication got them through the difficult moments of their 18-month-long labor of love.

“We both wanted this so bad, so it wasn’t about quitting it was like, ‘Do you want it as bad as I do? Okay, let’s go,” said Naomi.

“There were moments when I was super busy and she’d come to the bus and knock something out,” said Kyle. He said that uplifting and being able to support each other was how they got through it.

Credit: The Thacker family
A Fishers couple has refitted a school bus to become a home on wheels and they plan to document their road trip across the county on both Instagram and YouTube.

The newlyweds tied the knot in October and would eventually like to have kids. But before settling down, they want to take some time to explore together.

“We just really wanted those two years to just travel, adventure, really get to know each other even better,” said Naomi.

Their transition to bus-living is making them closer than ever.

Economically, a skoolie made more sense than a recreational vehicle and they felt more secure knowing that a school bus has steel framing

He said normally one could build a skoolie for about $10,000 to $15,000, but they wanted to upgrade certain finishes so they paid a bit more. Their skoolie has solar panels, a rooftop deck, security cameras, a shower and a toilet.

When it came to the very complex aspects like plumbing and electrical, they outsourced.

“A guy named Carl, our friend Cody, helped us with stuff, we had people we hired for certain things,” said Kyle.

Kyle is also a videographer, so they plan to film their experience on the road. They’ve started a vlog and hope to film a documentary as well.

“We want to do it to show people what bus life is like and also to keep as a keepsake for our family and our kids,” said Kyle.

“He actually asked my dad for my hand in marriage in the bus, so we have these milestones and it all started here,” said Naomi.

The Thackers plan to hit the road by the end of the year with their dog, who’s appropriately named "Trip."

Credit: Thacker Family
Naomi, Kyle and Trip Thacker will soon hit the road in their "skoolie," a school bus that is retrofitted to become a house on wheels.

Their skoolie is basically done. Now, they just need help building out the back bumper into a deck and painting the bus.