Thousands of Hoosiers who lost work because of the pandemic are still waiting to get their unemployment insurance. 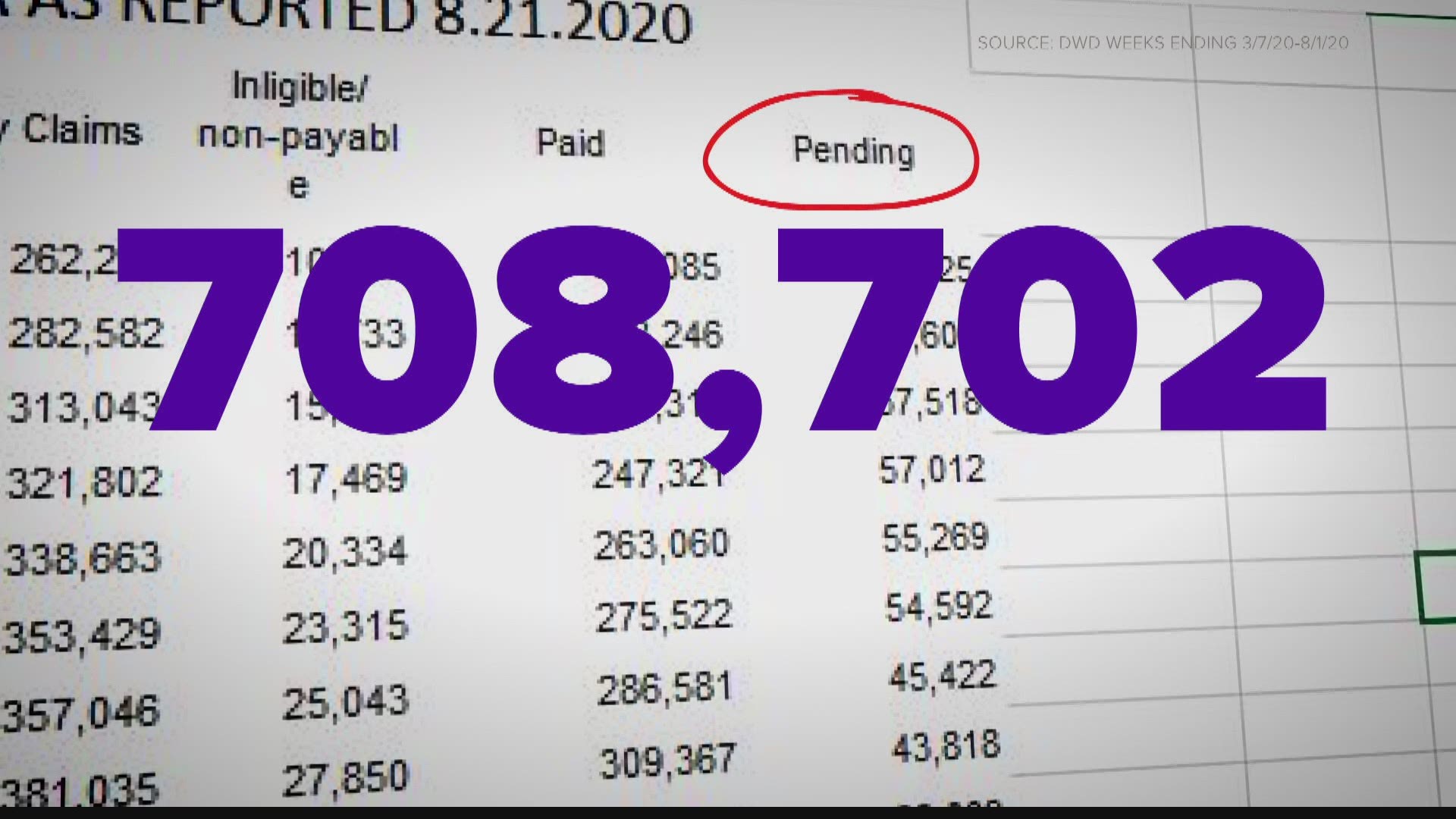 INDIANAPOLIS — Thousands of Hoosiers who lost work because of the pandemic are still waiting to get their unemployment insurance, and getting someone from the Indiana Department of Workforce Development to help can seem impossible.

“I’ve been waiting for months. There’s just no way to describe it,” said Myrna Dowell of Indianapolis. “It’s almost been like a nightmare. The amount of time you wait is just a nightmare.”

“It’s like you’re a number and they’ve given up on you,” echoed Matthew Boyd, who last received a benefit payment from DWD in late May.

State data obtained by 13News suggests hundreds of thousands of weekly claims for unemployment benefits were still listed as “pending” months after the time period for which they were filed. And despite DWD spending $15 million to hire hundreds of private workers to reduce long call wait times, Hoosiers trying to reach the state agency say they are still placed on hold — sometimes for hours — raising questions about a costly fix that appears not to be working.

Benefits stopped with no explanation

Myrna Dowell said she enjoys being around people. That’s why she loved passing out samples at Sam’s Club, a job she had for more than seven years before she was laid off in late March due to the pandemic.

At first, Dowell did not realize she could file for unemployment due to the loss of her part-time job. A friend walked her through the process of filing with DWD, and she then received two checks for pandemic unemployment assistance. That was back in July.

“Since then, I have not gotten a check for 12 weeks,” Dowell told 13News. “They tell me something about me being listed as full time, but I’ve never worked there full time. You tell them what you’re going through, but it’s like they can’t or won’t do anything about it.”

Matthew Boyd has struggled to work due to several medical conditions. He still files weekly claims for unemployment insurance with DWD.

“I got it for a while, and then they just stopped,” he said. That was over 140 days ago, and he hasn't been able to get anyone at the state agency to explain why his weekly claims are continually denied.

“I can't help with any of the bills around the house. I literally just feel useless,” he said, shaking his head.

Dowell and Boyd are not alone.

After being contacted by dozens of 13News viewers who said they, too, have waited months for their unemployment insurance to be approved by the Indiana DWD, 13 Investigates asked the Department of Workforce Development how many Hoosiers have pending unemployment claims still waiting to be paid.

Getting information from DWD did not come easy.

It took more than two months for DWD to provide the data, and the numbers the state agency provided show only a snapshot in time. But that snapshot it telling.

During the first five months of the pandemic, Indiana received roughly 8.2 million claims for weekly unemployment. As of August 21, DWD said it had paid about 6.8 million of those claims, or about 83 percent.

DWD said some of those claims were submitted late (like Dowell, some workers wait several months to submit their unemployment claims), and others might be listed as pending because of suspected fraud.

The department has not explained how many of the 708,000 claims still listed as pending on Aug. 21 were due to extreme delays in claims processing, internal clerical errors, or other problems inside DWD. And the department has not yet provided 13News with updated data to help track its progress over time. DWD chooses to treat every request for information – including updates on previous requests – as a new submission under the Indiana Access to Public Records Act. DWD has been taking a minimum of eight weeks to provide data requested by 13News.

While waiting for the updated data, 13News has continued to hear daily from frustrated Hoosiers who report the same problem: continued long delays in receiving unemployment benefits. DWD has said it pays most claims within 21 days. Catherine Donley has been waiting 25 weeks.

Donley lost her job at Angie’s List in early May and quickly filed for unemployment. In late July, with no explanation, she was notified her weekly claims were all denied. She appealed DWD’s ruling but has heard nothing since.

“It’s been overwhelming really. Can you even imagine waiting 25 weeks and can’t even get someone to explain what is going on? I’ve never seen anything like it,” said the Greenwood mother who is has four children in college. “I’ve only talked to a live person a few times and they can’t help at all. They say they wish they could help and feel really bad, but they have no ability to actually help you. It’s just a horrible system.”

Huge wait times – then and now

Adding insult to injury, families across the state tell 13News trying to get problems with DWD resolved takes forever.

“I’m put on hold for a long time – a good hour or better,” said Dowell.

“Yeah, it takes about two to three hours on the phone to maybe get an answering machine,” Boyd agreed.

Sitting on his front porch, he showed 13News what he considered to be a typical experience waiting on hold to reach a staff member at DWD. After navigating a series of automated voice prompts and waiting on hold for about 20 minutes, a recording said, “Thank you for calling. Goodbye.” The call was then disconnected, and Boyd was left to start the process of trying to reach a DWD customer service representative from the beginning.

Internal documents show the system is not supposed to work that way.

Back in April, when hundreds of thousands of Hoosiers flooded DWD with questions about unemployment benefits, the state hired a contractor to answer those calls. DWD granted a $5 million contract to a company called Navient. The contract required Navient to provide 90 call center customer service workers to help Hoosiers needing assistance with their unemployment.

“Navient would work with Indiana DWD to redirect all calls to Navient’s call center hub for triage,” said the contract, further explaining that the company would provide call center agents operating from Indiana and other locations to support front-line call center operations for DWD. Calls that cannot be properly addressed by a contracted worker are then supposed to be escalated to a DWD staff person.

Prior to the change, DWD staff received an average of 45,972 calls per day between March 16 and April 6, and during that time, the average caller waited on hold for 91 minutes and 17 seconds, according to call data obtained by 13News.

After the new contact center went online, contracted workers hired by DWD answered an average of 42,781 calls per day between April 7 and May 1, and the average caller waited 89 minutes and 53 seconds to reach DWD.

The minimal 1.5 percent change in call wait times, despite a 7 percent decrease in overall call volume, raised alarm bells inside DWD. Callers trying to reach DWD still regularly waited 90 minutes or more weeks after the new call center was in place. (Keep in mind, that was just the average, meaning many callers waited much longer.)

Facing a growing backlash, the state quietly decided to triple the number of contracted call agents and triple the size of its call center contract to a whopping $15 million. Eventually, by mid-May, average wait times finally started to fall below 30 minutes. In June, the state said average wait times on some days dropped as low as six minutes before jumping back up again in July. DWD had declined to comment on any of the wait times, despite repeated questions from 13News over the past four months.

“The vendor was brought on quickly to deal with the sudden and historic call level volume. As the vendor staff gained additional knowledge, they were able to answer more complex questions. Very few calls are escalated to DWD staff currently,” a DWD spokesman wrote in a statement to 13News.

Despite DWD statistics that suggest significantly improved call wait times, many Hoosiers say the reality is much different.

“Yesterday I called. They couldn’t accept my call at all,” Dowell told 13News. “What good is it doing calling them for help? You still can’t get anyone to answer.”

“Who has time to spend two hours on hold?” asked Boyd. “If it's going to take that long, there's no point. I’m not sure what they spent all that money on, but it isn’t working.”

13 Investigates has asked DWD for additional documentation to show whether Navient actually hired the 270 call center representatives that are stipulated in the state’s amended call center contract. The contract allows the number of workers to be increased or decreased depending on demand and other factors. More than seven weeks after requesting that documentation, DWD has not yet provided 13News with any information to show how many call center workers Navient hired to fulfill its $15 million call center contract.

It's also worth noting, it’s not just people trying to file for unemployment who can't get through to the Department of Workforce Development.

Over the past eight weeks, 13News has asked the department eight times to speak about unemployment insurance delays and long call wait times. Despite eight separate calls over eight weeks, DWD spokesman Bob Birge has not responded to 13News’ interview requests even once.