A 24-year-old woman is facing charges for a crash that killed three siblings who were boarding a school bus Tuesday morning. 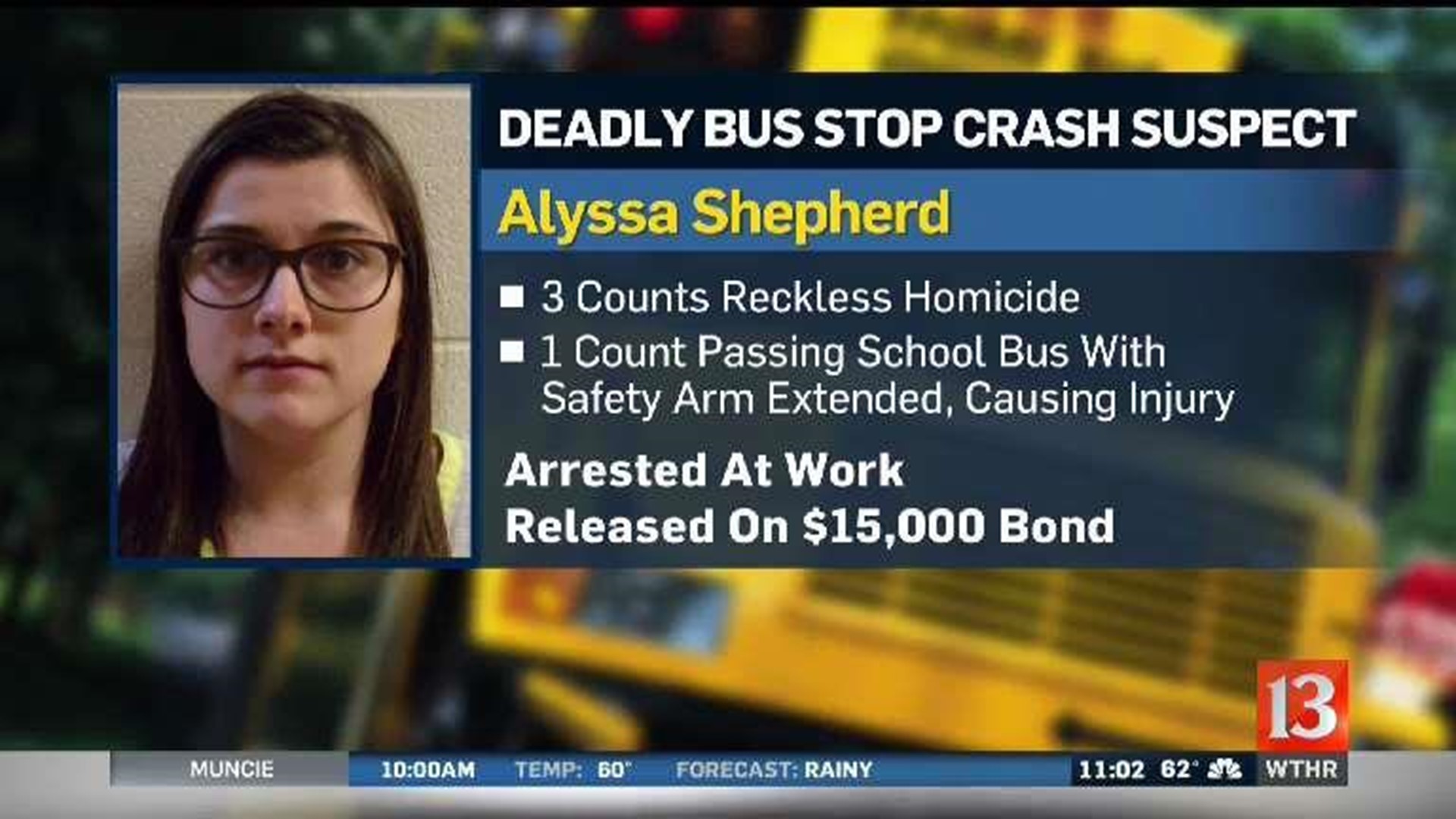 FULTON COUNTY, Ind. (WTHR) — A 24-year-old woman is facing charges for a crash that killed three siblings who were boarding a school bus Tuesday morning.

The crash happened before 7:30 a.m. Tuesday along SR 25 near CR 500 North in Fulton County, near Rochester.

ISP is investigating a fatal crash in Fulton County. Preliminary info is three children were struck & killed at a school bus stop near 4600 N State Road 25. @ISPPeru PIO Sgt. Tony Slocum is at the scene. Updated and confirmed info will be sent via news release later today.

Alyssa Shepherd, 24, of Rochester, was charged with three counts of reckless homicide and one count of passing a school bus with its safety arm extended and causing injury. She was arrested at her place of employment Tuesday afternoon.

An officer at the Fulton County Jail tells Eyewitness News Shepherd was released from custody after posting bond Tuesday evening. She had been held on a $15,000 surety bond, state police said.

The three children who died are all part of the same family, WNDU reports. The children have been identified as twin 6-year-old boys, Xzavier and Mason Ingle, and their 9-year-old sister, Alivia Stahl.

An 11-year-old boy identified as Maverik Lowe was airlifted to a Fort Wayne Hospital. He suffered multiple broken bones and injuries. Police say he was conscious at the hospital and is not related to the other children who were hit.

The siblings were students at Mentone Elementary School, state police said. Lowe is a student at Tippecanoe Valley Middle School.

Police say the bus was traveling north on SR 25 when the bus driver stopped in front of a mobile home park with the stop arm extended and the exterior lights activated. As the children crossed the road, the four children were allegedly struck by a southbound Toyota Tacoma driven by Shepherd.

Police say the investigation is ongoing.

The Tippecanoe Valley School Corporation released a statement after the crash:

Our school corporation has suffered a tragedy this morning. We have learned of three student fatalities and one student seriously injured and airlifted to a Fort Wayne hospital as they were hit by a vehicle while boarding their bus.

We have deployed all school counselors to meet the emotional needs of our staff, students and parents.

We are awaiting to learn more confirmed details but wish to ask the community to come together to pray for the families, our students and our staff.

Gov. Holcomb also released a statement regarding the tragedy:

“Words cannot express the depth of sorrow Janet and I feel, which only pales in comparison to what family, friends, teachers, classmates and community are feeling right now. Today, and for many more to come, we mourn their loss. I ask Hoosiers around the state to join us by sending your deepest prayers for the strength needed to endure such a time.”