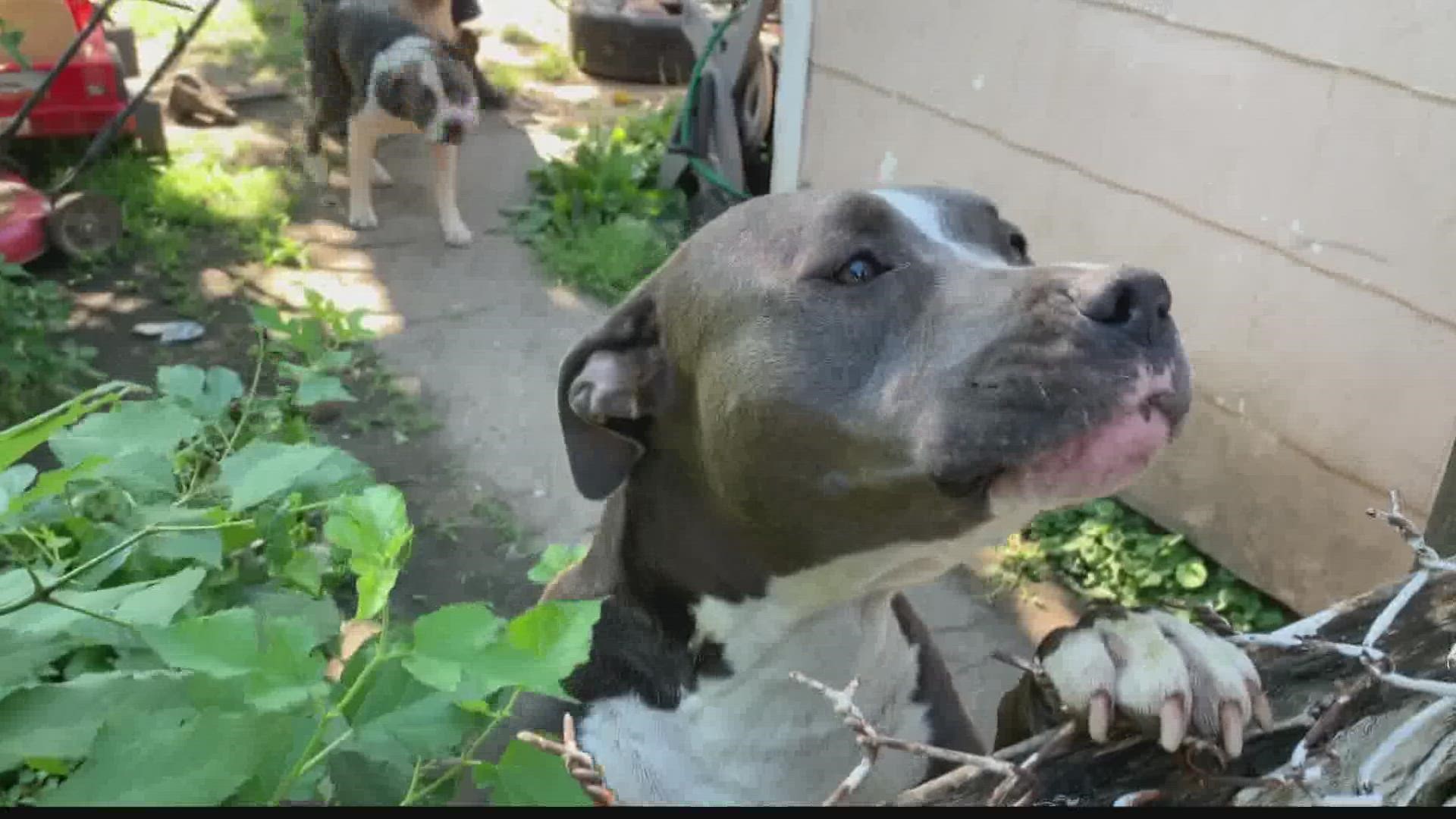 INDIANAPOLIS — People in a near west side Indianapolis neighborhood say they are feeling both relief and sadness after the city euthanized two dogs that attacked and killed other pets.

The two pit bull dogs, Sheba and Izzy, were involved in at least four recent attacks that terrorized neighbors living near George Washington High School. Additional attacks dating back to 2019 had been reported to the city’s Animal Care Services (ACS) department, but despite some of those incidents being caught on home security cameras, city officials did not remove the animals until a series of attacks earlier this year that killed at least three pets in three months.

“It’s been just constant fear. We can have a sense of security in the neighborhood again,” said Felisha Sosa, who had both a dog and a cat attacked by the pit bulls in two separate incidents. “I think it’s the right thing. It’s just unfortunate, you know. They are just dogs that got stuck with the wrong owners.”

A history of “brutal” attacks

13News reported on the attacks in June after residents contacted 13 Investigates and posted video of several incidents on social media.

Credit: Felisha Sosa
Felisha Sosa tries to get her pets inside as two dogs attack one of her Chihuahuas.

Besides the attacks on Sosa’s animals, Sheba and Izzy were also accused of killing a dog owned by the family of Vanesa Segovia.

“It was quick. It was in a matter of seconds to be honest,” she told 13News, remembering what she called a “brutal attack” that she witnessed from her bedroom window. “The dogs were on top of him like he was trying to fight them, get away from them, but it was too late. It was two big pit bulls, and he was a little Chihuahua. What's a little chihuahua going to do with two big pit bulls?”

Earlier that same day, the dogs killed a shih tzu nearby on Addison Street. When an animal control officer was called to the scene, he saw Izzy and Sheba running loose in the neighborhood, according to court documents.

Their owner, Jeremiah Stargell, admitted to 13News that his dogs “got loose” on several occasions and were involved in some of the fatal attacks, but he insisted Izzy and Sheba were well cared for and not a danger to the community.

“They're good dogs. They aren't vicious dogs,” he said, adding that he was going to immediately install both an 8-foot privacy fence and an electric fence to ensure the dogs did not get out of his yard again. (No fencing upgrades were visible during a recent visit to the house.)

Credit: WTHR
Jeremiah Stargell plays with Sheba, one of his two pit bull dogs that has attacked other animals in the neighborhood.

While there are no reports of the dogs biting or attacking people, ACS did conduct investigations and cite Stargell for ordinance violations based on the incidents involving other animals.

Stargell was ordered to appear in court last month for a trial and a pre-trial conference for two of the attacks. He did not appear at either court hearing, prompting the city prosecutor’s office to file a motion for default judgement in both cases.

When that did not happen, ACS went to Stargell’s home on Addison Street and removed the dogs. They were euthanized the same day.

“Once they were impounded, they did have to be euthanized because of their history,” said ACS deputy director Katie Trennepohl. “Unfortunately, it’s not the outcome that we would like to see. We take these decisions very seriously because they are literally life and death.”

Credit: WTHR
Jeremiah Stargell plays with Sheba, one of his two pit bull dogs that has attacked other animals in the neighborhood.

Trennepohl said cases like these are especially difficult because the blame usually lies with the owners, not with the pets that must be euthanized.

“It could have been such a different outcome if the owner had cared for the animals responsibly and kept them contained. For all we know, these dogs could have been great pets if they were set up to succeed in the right home, but they didn’t get that chance,” she said. “The dogs were very sweet with people. But with the history like these dogs had, we just couldn’t safely and responsibly put them back out into the community.”

“He had multiple opportunities to do the right thing and never did,” she said. “He’s probably not the right person to have dogs. I’ve known some really incredible pit bulls and they wouldn’t touch a fly, they were just really gentle creatures. I think a lot of it depends on how they’re raised and how they’re trained. It’s just really unfortunate.”

The magistrate’s order also includes a permanent injunction that prohibits Stargell from owning or keeping any other animals in Marion County.

Sosa says she looks forward to once again walking her own dogs outside – something she has not felt comfortable to do since the attacks began.

“It will probably take me a while to feel safe again It’s been scary, but this will help,” she said.

Credit: WTHR
Felisha Sosa sits on the couch with her two Chihuahuas.