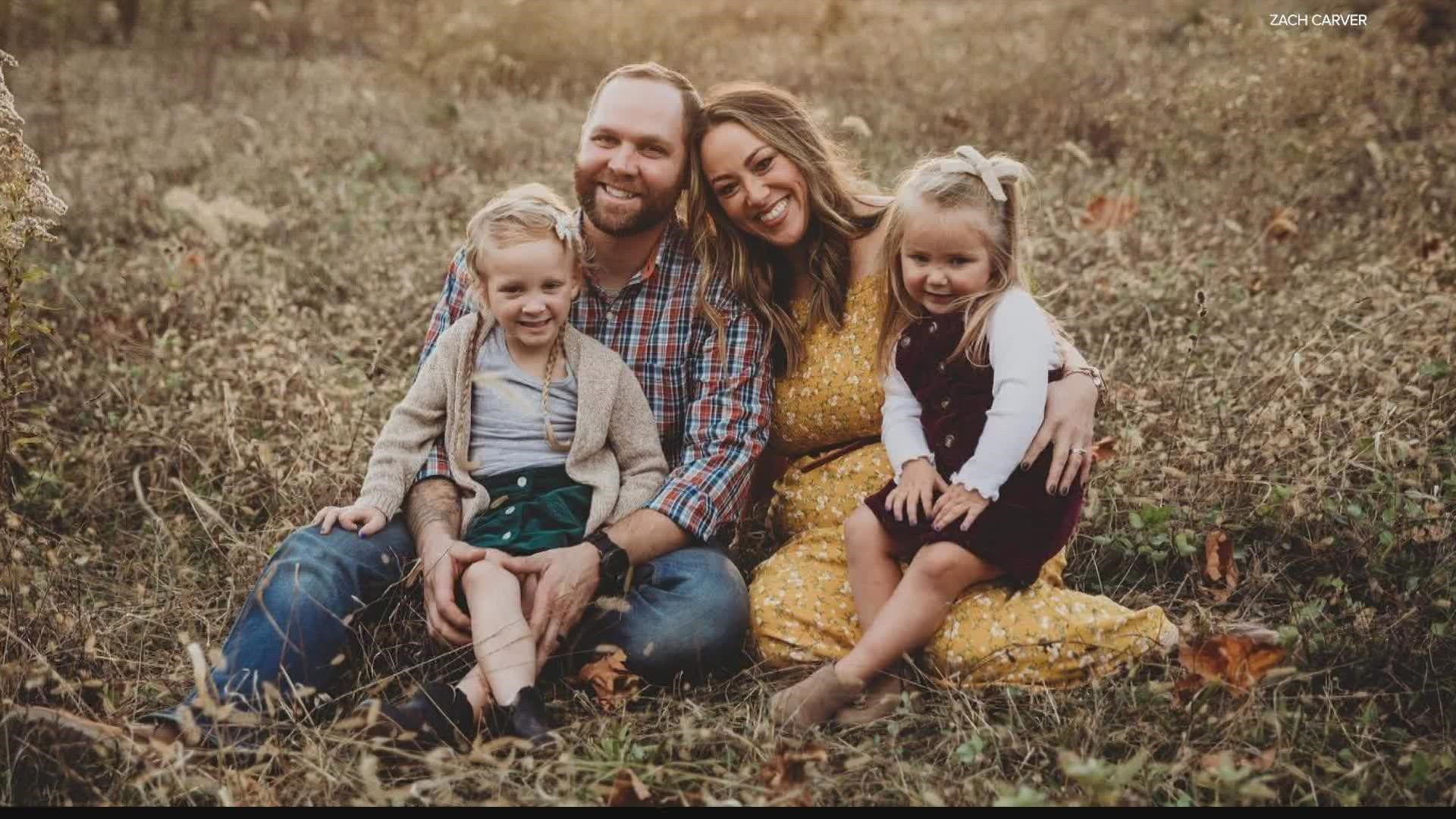 INDIANAPOLIS — An Indianapolis mother is fighting for her life after COVID-19 nearly destroyed her lungs.

Autumn Carver has been on life support for over a month now at IU Health Methodist Hospital. Her husband, Zach, is asking for prayers for Autumn and her doctors as he patiently believes his wife will one day get to meet her newborn son.

"The most caring and loving person that I've ever met,” Zach describes his wife. “I’m not just saying that because she's my wife. But she lights up a room. She's got a beautiful smile. She's very caring and goes above and beyond to take care of her friends and family, and she's the best mother that I could ever ask for our children."

Huxley Carver is one month old, born August 27 by emergency C-section, several weeks early, but at home now with his two older sisters and doing fine - except Huxley has never seen his mother. Autumn went on an ECMO life support machine the same day she delivered her son.

"The last time I heard her voice was the 25th of August,” said Zach, standing in the hospital parking lot. “The last time we really communicated was the 27th. She did smile at me on Sunday twice and she gave me a half-smirk yesterday. She squeezed my hand multiple times. But she's highly sedated right now letting her lungs heal."

Zach and Autumn both got COVID-19 last month. Zach had a high fever. The virus attacked Autumn's lungs. She went into Community South Hospital Aug. 25, on to a ventilator, then was flown by helicopter to Methodist Hospital just two days later to deliver her baby and go on life support.

Zach and Autumn had suffered through the heartache of three miscarriages. So, after consulting with their doctor, they both decided not to get the COVID-19 vaccine during the pregnancy.

Doctors thought Autumn, an active 34-year-old who did CrossFit workouts, might need a double lung transplant.

"I'm forever grateful for everybody's support and love, and then that's what I'd be asking for, for anybody thinking about Autumn, is to say prayers for her and for her healing, her lungs to heal,” said Zach.

Credit: Zach Carver
Zach and Autumn Carver with their daughters, Harlow and Sadie.

This month, the high school sweethearts celebrated 19 years together as a couple and nine years married. Their anniversary passed with Autumn in the hospital, where Zach spends every moment he can.

"Being by her side and holding her hand and whispering she's going to be OK and to keep fighting,” said Zach. “She's responded multiple times with a head nod or a blink of an eye or something. So, I know that she's fighting with all she has. And I just have to be standing by her side."