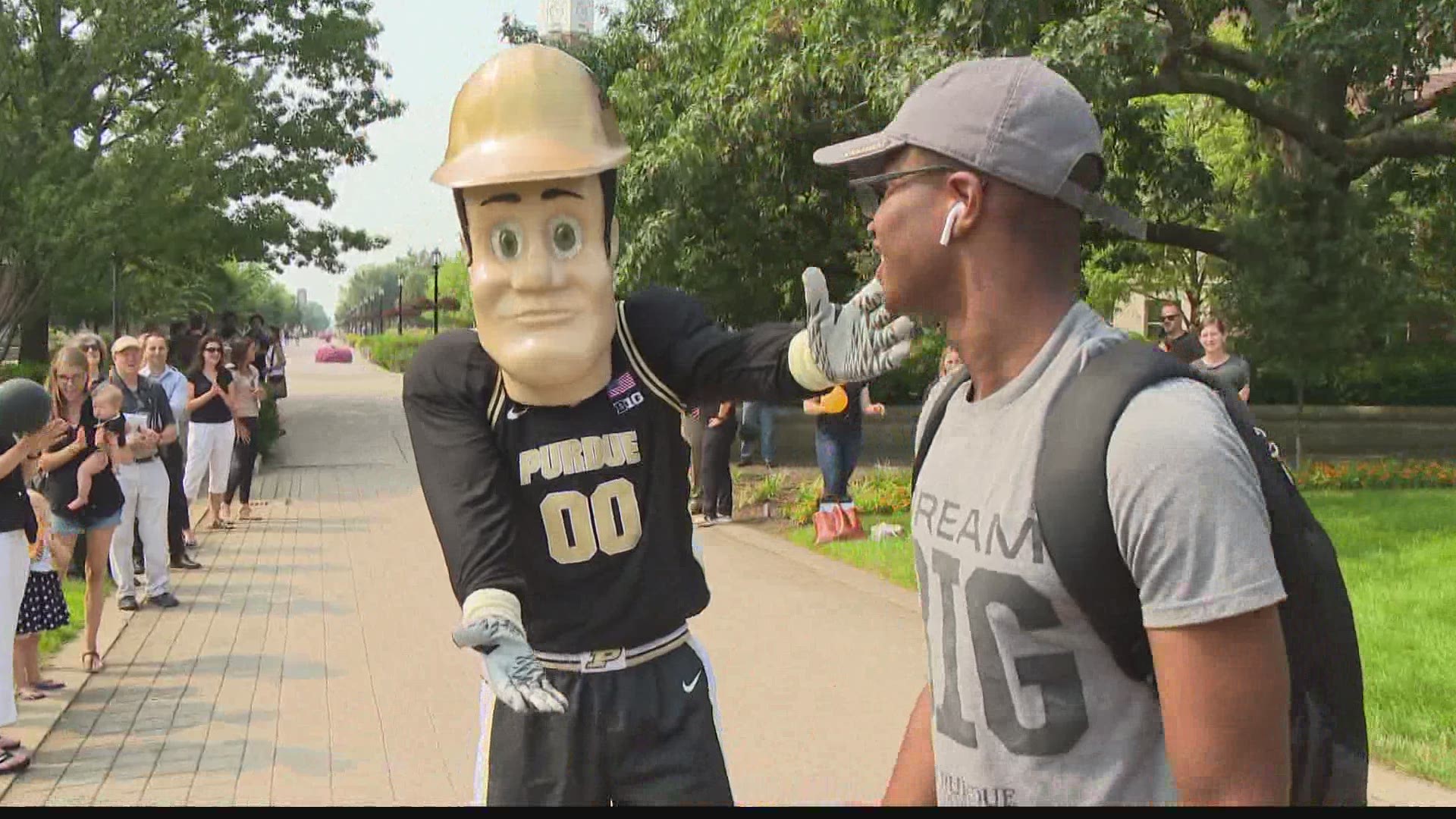 WEST LAFAYETTE, Ind. — Late Friday morning, after finishing class, incoming freshman Quentin Betts headed to the engineering fountain with Purdue's Kelly Young. He was to be interviewed for podcast - or so he was told.

But as the two got closer to the fountain, the noise grew louder. Young pointed to the Boilermaker Special parked near the fountain and those gathered near by cheering and applauding as the two approached.

"Yikes, looks like you have a grand welcoming committee," Young said followed quickly by, "I have to tell you something. You know the Old Golden Ticket vaccine drawing? You won it."

Purdue Pete held a large Old Golden Ticket with $9,992 printed on it, the equivalent of one year's tuition at Purdue.

As Quentin began soaking it in, Young laughed, "So sorry I tricked you, but how are you feeling now?''

Purdue announced the drawing a few months ago as another way to encourage students to get vaccinated. At last report, 60% of incoming students had been fully vaccinated.

Tim Doty, Purdue's director of media and public relations, said, "the more people we know are vaccinated, the more we know people are upholding the Protect Purdue pledge."

All students had to do was submit proof of vaccination to be part of the drawing.

As it so happens, Quentin was part of Purdue Polytechnic High School's first graduating class this spring. It's one of two schools in Indianapolis aimed at helping low-income, first-generation and minority students get to Purdue.

"It made me do a lot of things to get out of my comfort zone," Quentin said. "I met people that shaped my life and made me want to go to Purdue."

RELATED: Daniels: Purdue will not require COVID-19 vaccine, not saying how it will enforce other restrictions

He's among 39 recent PPHS graduates starting at Purdue August 23. As Quentin took a celebratory ride around campus aboard the Boilermaker Special, he called his mom to share the news.

When he told her he ended up winning the drawing, enough money to cover tuition his freshman year, his mom let out a long and boisterous, 'Yay!'

Quite a reaction from a diehard Hoosier.

When Quentin joked, asking his mom, "Aren't you glad I didn't go to IU?" You could feel her smile when she said, "Well, we're a little better about that now."

She later said her husband had been joking, saying their son was going to win. She said she told him, "I sure hope so. It means a lot. We're so happy and so thankful."

The nine other lucky winners will also get a surprise visit from Purdue Pete either in person or virtually within the next two weeks.