Metro police are investigating a fatal officer-involved shooting on the northwest side. 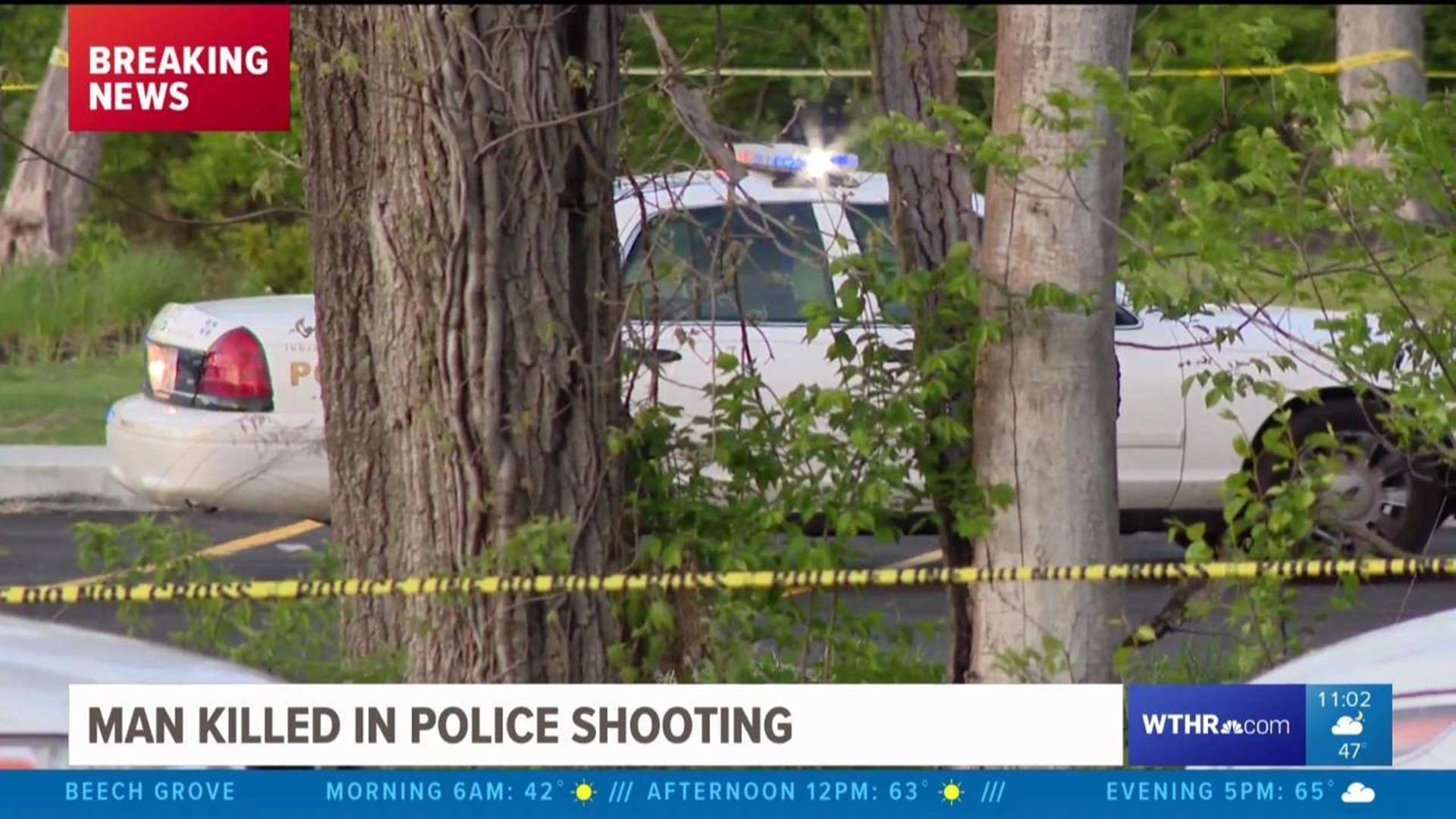 INDIANAPOLIS (WTHR) — IMPD officers are investigating a fatal officer-involved shooting on the northwest side.

The shooting happened just after 6:15 p.m. Wednesday in the area of West 62nd Street and North Michigan Road.

Police said IMPD Chief Randal Taylor and Deputy Chief Kendale Adams were driving home on Interstate 65 when they spotted a car driving erratically. The officers began a pursuit, which reached speeds over 90 mph. When officers in marked cars picked up the pursuit, Taylor and Adams pulled off of the chase, per protocol.

Police said another officer spotted the car that had been involved in the pursuit a short time later. The driver stopped the car in a parking lot at 62nd Street and Michigan Road, then got out and fled on foot. The officer chased him on foot.

During that foot chase, police said there was an altercation. The officer used a stun gun on the man, but investigators are not clear if it was effective. The man reportedly fired at the officer, who returned fire, killing the man.

The man involved in the incident was identified by the coroner's office as 21-year-old Dreasjon Reed. Family members told 13News he went by Sean Reed, a Lawrence North High School grad who also served in the Air Force.

The officer who was involved in the shooting was not hurt.

The officer and suspect — both of whom police say are African American — were the only two people at the scene at the time of the shooting. Investigators found a gun near the man that does not belong to the officer, an IMPD spokesperson said.

In a news conference Thursday, Chief Taylor said he was aware of comments on social media indicating the gun may not have been the suspect's. He said their investigation shows it is "reasonable to believe" the gun was in fact the suspect's.

Taylor said the weapon matched another the suspect had been seen with in social media posts. Taylor could not confirm if the gun was stolen or legally obtained.

Taylor said the gun was loaded and evidence indicated it was fired twice in the incident.

Indianapolis Mayor Joe Hogsett released a statement about the incidents in the last 24 hours:

“Last night, our city experienced a series of tragedies that raise understandable questions and once again reveal the scars of mistrust left behind by a national legacy of discrimination against communities of color.

As these incidents are investigated and reviewed by the Marion County Prosecutor’s Office, we are committed to ensuring that these processes are transparent and that information is released as it becomes available."

The suspect was streaming the chase live on Facebook as it happened. The live video captured the moment he got out of the car and fled from an officer, including the moment when shots were fired.

NOTE: The following video contains language that may be considered offensive to some viewers. 13News edited the video, stopping it just before the shots were fired. A series of shots can be heard in the original video and the camera falls, pointed toward the sky.

The live stream continued for several minutes after the shooting until officers stopped the video. The Facebook post that included the live stream was also removed from the man's page, though it is not clear at this time how it was removed or by whom.

The IMPD spokesperson said investigators were made aware of the Facebook video and "the officers and detectives have done their due diligence in preserving that evidence through the proper legal channels."

"If it's associated and there’s information on there that's appropriate for the investigation, they will use it," the police spokesperson said.

The full video showed inappropriate comments made by an officer after the suspect was shot. Taylor said he is aware of the comments and said they are "unacceptable and unbecoming of police department."

Taylor also clarified that the officer who made the comments was not on the scene or involved in the shooting, but showed up afterward.

The Greater Indianapolis NAACP released a statement about the shooting and the Facebook video:

We’re aware of some facts from the Facebook Live video. However, the NAACP will monitor and review additional facts as the investigations proceed and then determine whether it warrants any actions by our organization.

We ask the community to allow the process to proceed, as we monitor the various investigative units that will uncover the facts. If you believe you have relevant information, we ask you to provide it to investigators.

The group also asked people not to gather in large groups to protest, given the disproportionate effect of COVID-19 on African American communities.

The ACLU also released a statement, calling for a thorough investigation because the public deserves a detailed account of the incident.

We join many in the community by calling for a prompt, thorough, and transparent investigation into the deadly shooting of Sean Reed. The public deserves to get a detailed account of why this man was shot and what actions Indianapolis Police took to avoid yet another fatal shooting.

Whether someone is unarmed or armed, compliant or resistant, police officers should be properly trained in de-escalation tactics and turn to the use of force only as a last resort, not a first option.

We see time and time again that excessive force by police disproportionately impacts black and brown community members. Law enforcement in Indiana should treat all communities with dignity, employ restraint on police power, and use only the degree of force necessary to maintain the community’s safety. Transformational changes are desperately needed in our approach to public safety.

While an investigation is underway, the African American Coalition of Indianapolis (AACI) is calling for an independent investigation:

"We believe an independent and external investigation is required to determine what happened in this police action shooting, especially whether the civil rights of Dreasjon Reed were violated."

The investigation into the shooting is ongoing. Police told 13News there is no officer-worn body camera video of the incident, as IMPD officers do not wear body cameras.

Assistant Chief Chris Bailey said Thursday the department has been clear for years that it wants body cameras, but it's a matter of getting them to fit in the budget. He indicated their efforts had been slowed due to the coronavirus pandemic.

IMPD has previously participated in test programs with body cameras, but Bailey said the department never expected them to be fully implemented until mid- or late-summer.

Taylor said right now, he has no reason to believe the officer did not act appropriately. However, he did not want to try to come to a conclusion too soon and is willing to wait until the investigation is completed to say if the shooting was justified.

The officer involved has been placed on administrative leave, per department policy.

Summary of events according to IMPD