DCS worker's attorney: Client being singled out for returning child to mother

Police in Madison County are searching for a DCS caseworker indicted by a grand jury. 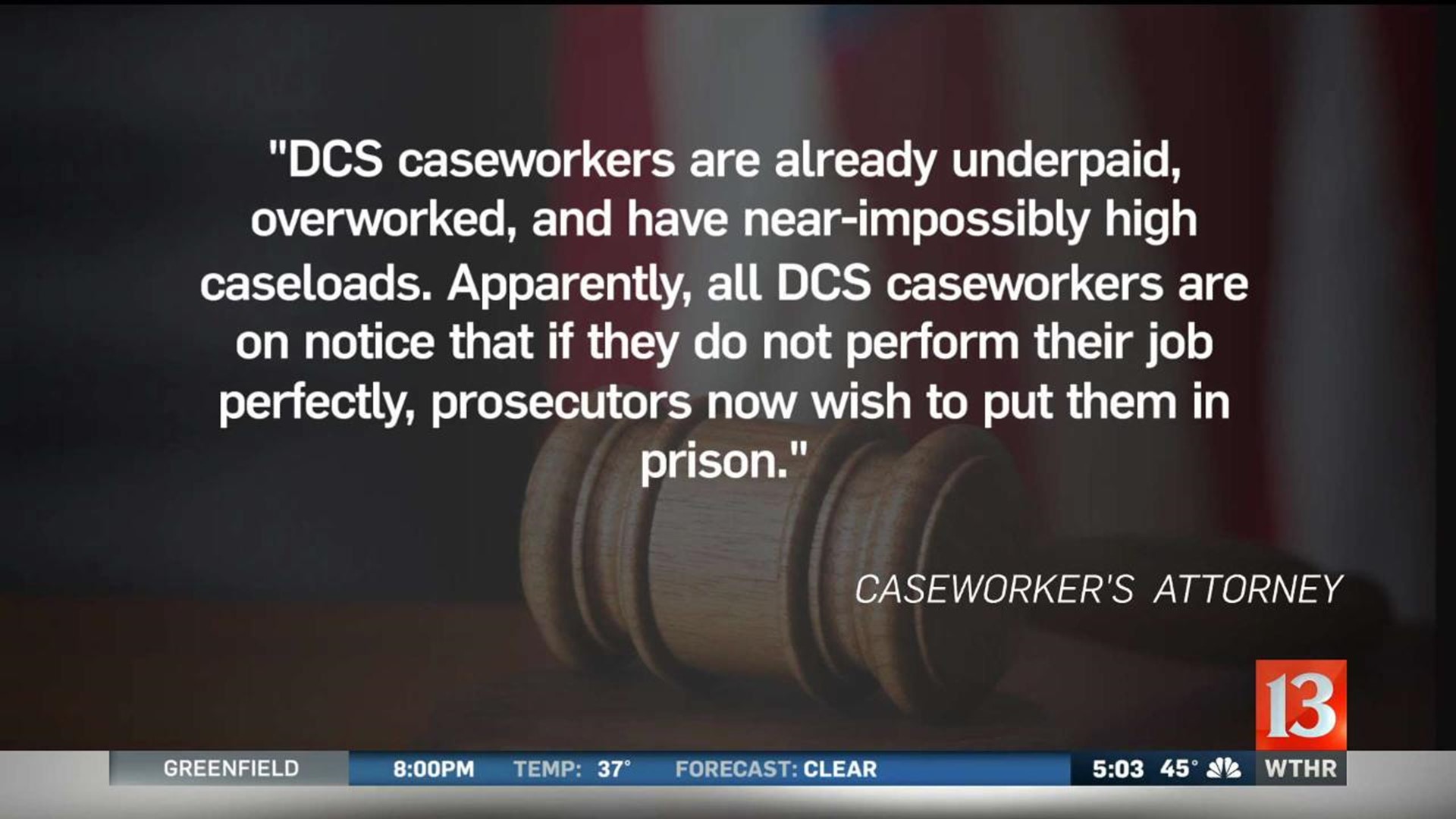 ANDERSON, Ind. (WTHR) — Police in Madison County are searching for a DCS caseworker indicted by a grand jury.

It found Spencer Day Osborn should have never returned a 4-year-old boy to his mother. He's now facing felony neglect of a dependent charges.

Osborn's attorney Philip Sheward responded to the indictment, saying his client doesn't understand why he is being singled out for his role in the incident.

Mr. Osborn does not understand why he is being singled out and charged criminally for returning a child to his biological mother as part of a Child In Need of Services ("CHINS") case. These decisions are not made by a single caseworker, but in collaboration with their supervisors and child advocates, then ultimately approved by the court.

Filing criminal charges against DCS caseworkers based upon abuse perpetrated by parents on their overloaded caseload will lead to at least two terrible outcomes. First, DCS caseworkers will and should be terrified to ever recommend returning a child to a parent. More children will languish in the foster care system because of this fear. Second, there will be a mass exodus of DCS caseworkers, making the institutional problems worse. DCS caseworkers are already underpaid, overworked, and have near-impossibly high caseloads. Apparently, all DCS caseworkers are on notice that if they do not perform their job perfectly, prosecutors now wish to put them in prison.

That mother was already convicted of neglecting another child in a different case.

Over the course of a year, Madison County Prosecutor Rodney Cummings said the caseworker didn't check on the child and that the number of times the home had been visited was exaggerated.

The prosecutor reports that the 4-year-old had been seen wearing long sleeve shirts in the summer and other signs of possible abuse or neglect.

"This case worker should have know what was happening. Done something about it much sooner than he did. Didn’t check on the child apparently. It’s just hard to imagine this could happen," Cummings said.

Hill was arrested in September.

The charges brought in this case came from a grand jury. That means the usual court documents detailing what happened are unavailable.

During our interview with Prosecutor Cummings came a revelation about the caseworker.

Cummings said the caseworker had a performance review that should have gotten him terminated.

The prosecutor also considered charges against the supervisor according to The Herald Bulletin.

Prosecutor Cummings made it clear this is how his office will now approach these cases with DCS workers.

"I hope caseworkers will say 'I better be diligent of what I am doing or I might be in trouble.' Please be diligent. Please think about protecting these children because I am not going to sit here and let this continue to happen to defenseless children in our community and someone will be held accountable," Cummings said.

Cummings said nothing is changing year after year and the department continues to fail children.

"I don’t understand how these things continue to happen. We had four children, 2 years young under the supervision of DCS murdered last year in this county. Probably seven that died under the supervision of DCS. Many of these children should have been taken out of that environment," Cummings said. "Nothing seems to change. There is an institutional dysfunction going on there."

The DCS responded to those questions with a written statement:

The Indiana Department of Child Services takes any allegation of misconduct against our employees very seriously, and the criminal case filed against our former employee is no exception. As providers of service to Hoosier families and children in crisis, we consider child safety our first priority and will take whatever steps necessary to ensure our families’ needs are being met.

We were told there would be no further comment on this matter and they referred to Spencer Day Osborn as a former employee. They later released an additional statement that included language stating: "Any allegation an employee has been neglectful in this regard is taken very seriously and is thoroughly investigated. We will continue to work with our state and local partners to ensure the needs of the children in our care are met."

Eyewitness News obtained employment records on Osborn and found he was terminated in September because his "behavior did not meet agency standards and was in violation of policies." He had been with the department since May of 2018.

Governor Eric Holcomb also responded to a request for comment on the incident:

“I am deeply troubled by these charges. Child safety is and will remain our top priority. The Department of Child Services is committed to serving families and protecting children from abuse and neglect.” - Gov. Eric Holcomb

Prosecutor Cummings pointed to the approach DCS takes as potentially part of the problem.

"The overarching concern at DCS is to reunite the family. Overall I think that is positive. That’s good, but sometimes all you do is put these children who cannot defend themselves right back into the hands of people who are preying on them," Cummings said.

That's why Cummings said the focus must be on protecting the children.

"I just don’t know what it will take for this agency to start protecting our children. I would call for a change in the law," Cummings said.

Eyewitness News is reaching out to lawmakers to get a response on whether they believe legislation is needed to address what Cummings said are issues with DCS.