A Home for Holaday: Community rebuilds home for veteran in time for the holidays

John Holaday was taken from his old house due to unsafe living conditions. The community came together to give him a new home. 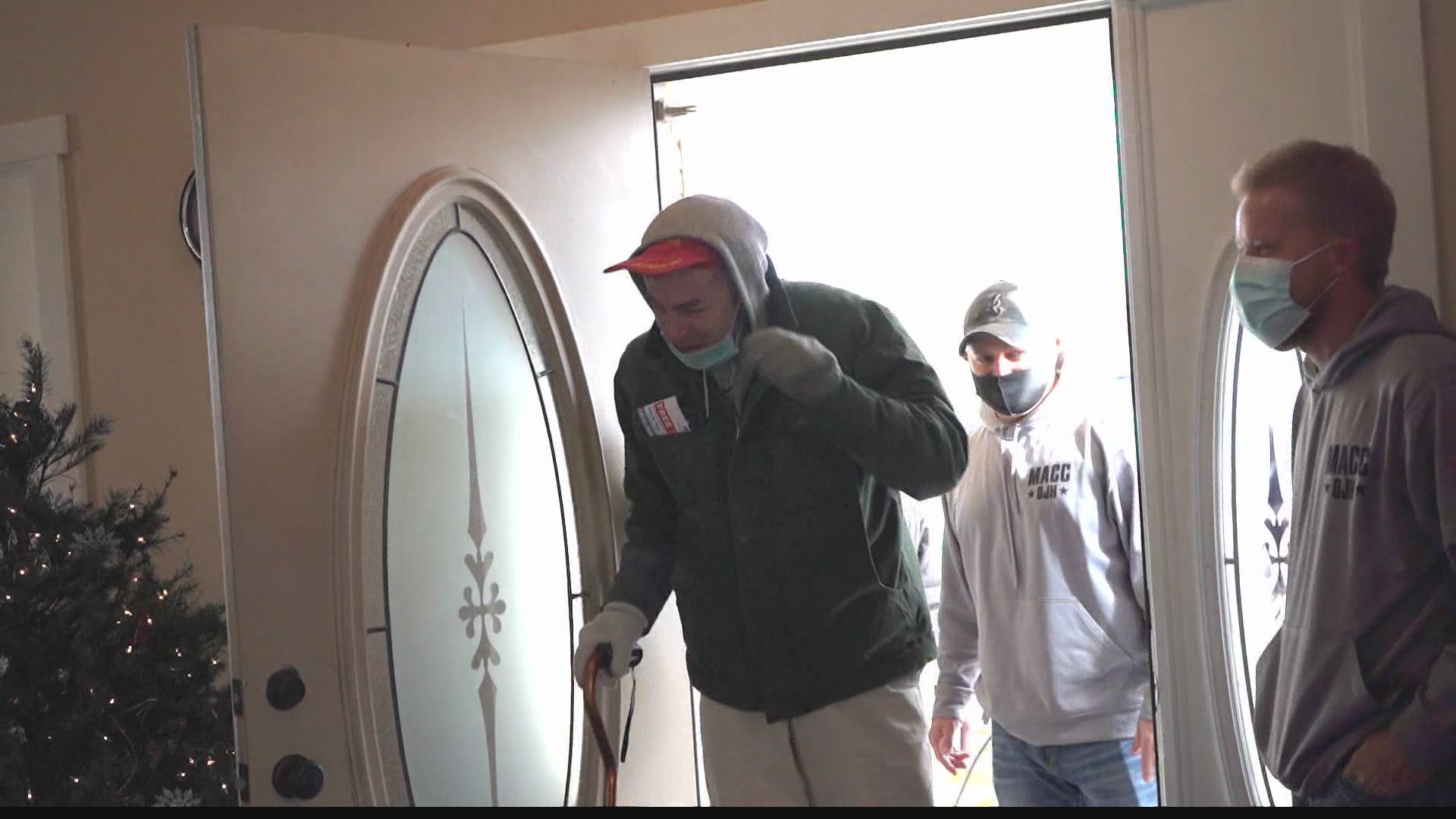 MUNCIE, Ind. — Anticipation filled the air hours before Vietnam veteran John Holaday was set to walk into his rebuilt home.

Neighbors who had donated decorations and linens stopped by to see the house before the big reveal.

One Muncie neighbor looked up at a painting of an eagle that hung above the living room. She said she had donated it to Holaday because her husband passed and she wanted him to enjoy it.

The 77-year-old veteran sat in his truck all the while, waiting until he could see his home from the inside. He had driven by a few times, but wasn’t allowed to see inside until the big day. As he was helped out of his white van, he began to sob.

“Welcome home!” could be heard as dozens of community members who made this rebuild a reality lined the walkway to his door.

“You were there for us, so we’re here for you,” a man could be heard saying.

“You sacrificed for us, so we’re sacrificing for you,” said another.

Overwhelmed by the number of people who showed up at his door, Holaday continued to sob as Nathan Jones, the man behind the rebuild project, slowly led him to the door.

Holaday held onto Jones as he stepped into his home.

“It’s so beautiful,” he said with wide eyes, as he began to sob.

Holaday said he hadn’t cried this much since his mother passed, but that today was about happy tears.

His mother's memory has a special connection to the street address as well: The street number was his mother’s birthdate, and the street is named after her favorite singer, Tony Bennett.

Holaday’s quick wit was not missed on anyone. He mentioned that Bennett had a younger wife, something he hoped to achieve as well as he knocked on the wall for good luck.

Standing in the doorway for several minutes, Holaday finally made his way to his bedroom.

There, his niece with whom he recently reunited after more than a decade, shared with him the story behind a blue blanket that lay across the foot of his bed.

“And you’re giving it to me,” Holaday said, pointing to himself.

Credit: WTHR
John Holaday wept as he sat in his new bedroom next to a blanket that belonged to his brother.

Overwhelmed, he sat on the middle of his bed and began to sob with his face in his hands. The blanket belonged to his late brother.

A little over two months ago, Holaday had only a mattress and clothes.

“No running water, no power, no sewage, no drywall,” said Jones, who is the Delaware County Veteran Affairs officer. He said he met Holaday while on a routine site visit. The health department wanted to remove Holaday from his home.

“They had every right to want to do that to protect his health,” said Jones.

Credit: Nathan Jones
John Holaday was going to be evicted from his old home due to unsafe living conditions.

Holaday said there was nothing difficult about living in those conditions after serving on the front lines of the Vietnam War and losing two of his close friends to the war.

But Jones knew he had to “do the right thing” and that was no way for any human to live, let alone someone who had sacrificed so much for this country. A fellow combat veteran himself, Jones decided to “be about it.”

“I’m all about being about it,” said Jones. “I can tell you without a doubt, the VA is good to us veterans. I’m not slamming that at all.

“It’s more about the overpromise and underdeliver kind of things that have happened. Our philosophy is, 'Look, if they’re not going to do it, boots on the ground will.' That’s just how we’re bred in the military,” said Jones.

“Within 48 hours or so, we had a lot of contributions coming in and one primarily large, large contribution coming in from an organization called Providing Hope VA. This gentleman out of South Carolina actually donated $30,000 to help fund building this house,” said Jones. He said a faith-based organization that wanted to remain anonymous also purchased roughly $12,000-$13,000 worth of material.

Credit: Nathan Jones
Volunteers built a new home for John Holaday from the ground up.

“From there, we partnered with the local schools, Muncie Area Career Center and the buildings trade class,” he added. “Roughly 140 individuals helped, and roughly somewhere around 30 businesses helped."

Some donated hardware, and Gill Brothers Furniture donated the couch.

"There was every local business that you could think of that was a good solid business in town helped. Not only that, people in the neighborhood, small-level business owners all came together, all sorts of people came to help. It was amazing to watch, and quite the task to manage and oversee,” said Jones, who credits his friends Chris Cameron, Jerry Highley and AJ Billiter for the assistance.

Jones said he had managed partial builds in the past as he owns several properties, but this was his first tear-down and rebuild from scratch. He provided temporary housing for Holaday himself for the 67 days it took to rebuild the home from scratch.

“I put this man in my own grandfather’s shoes,” said Jones.

Every detail in the house, from the Christmas decorations, to the "Home Sweet Home" signs, toothpaste and body wash were all placed into the house with love.

Credit: WTHR
Neighbors and volunteers donated all of the finishing touches to make John Holaday's new house a home.

“Everything from heating and air to digging out sewage lines to make sure they were connected,” said Jones.

It wasn’t pre-planned to have this house done by Christmas. Things just kept moving along to allow for it to happen.

“This is better than Christmas...So many people donated their time and money to make it come true for this old man,” said Holaday, shaking his head in disbelief as he slapped his hands on his lap.

Holaday said his favorite thing about the entire home was having all the people who came together to build this home in his living room.

Credit: WTHR
Volunteers built a new home for John Holaday from the ground up.

Jones said he’s just getting started, and he wants to launch a foundation to build homes for veterans across Delaware County, and eventually, all of Indiana. If you want to help Jones’ dream become a reality, you can contact him at (765) 576-0285 or via email at nathanj@gmail.com.