The history of geishas stretches back nearly 400 years. Scott Swan meets one geisha who says she's the first white woman in Japanese history to join the tradition. 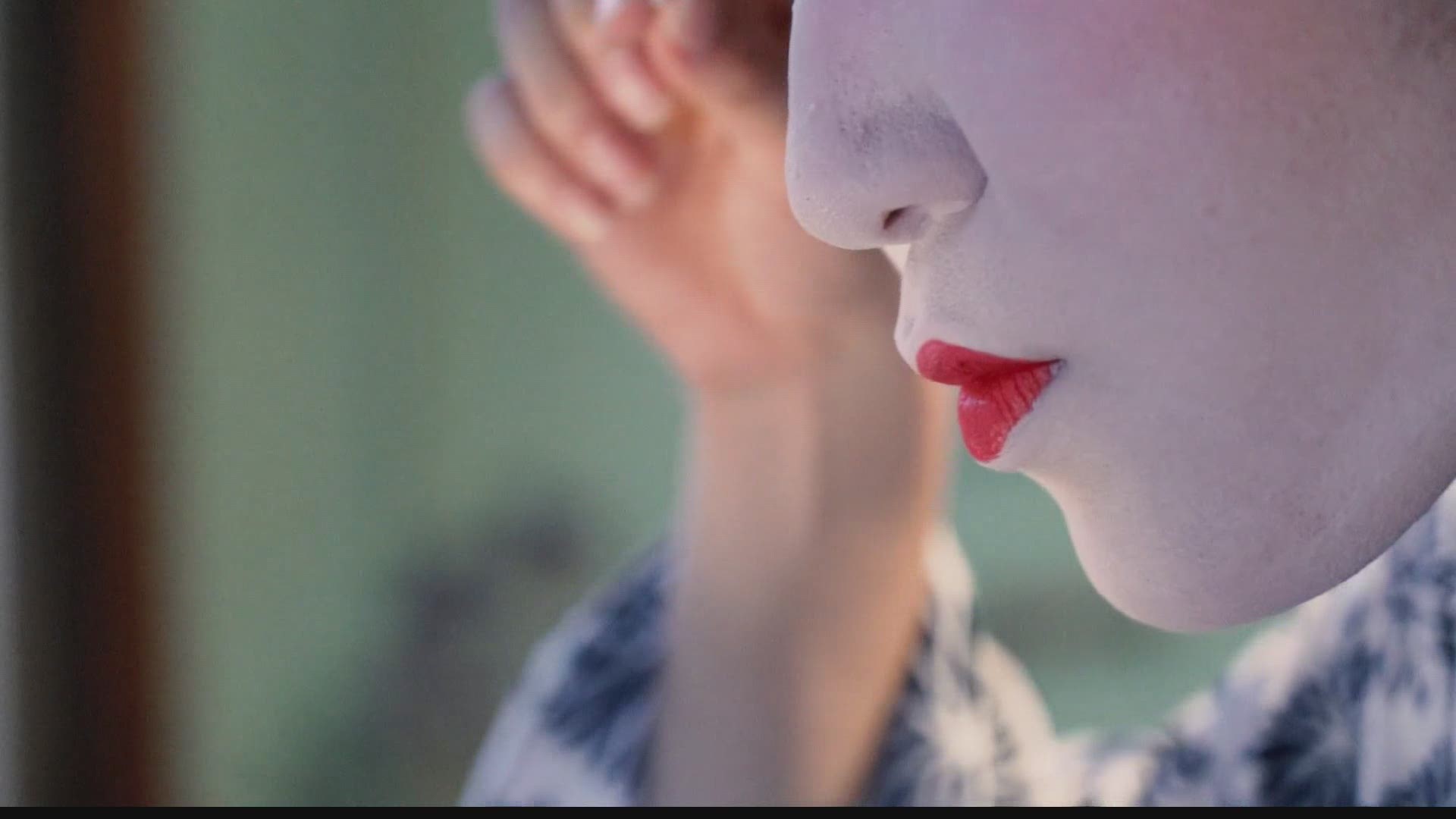 KYOTO, Japan — On the quiet streets of Kyoto you will get a glimpse of them. Dressed in Kimono. The familiar white makeup. Walking quickly. That is the extent of what most people see of a geisha.

13News is pulling back the veil on one of Japan's biggest mysteries.

Sayuki is a native of Australia who went to high school and attended university in Japan. She became a social anthropologist. Sayuki trained at Oxford and had dreams of doing a documentary about geishas.

But Sayuki decided to put the documentary idea aside and was accepted as the first white woman in Japanese history to become a geisha.

Sayuki is fascinated with the history of geishas in Japan.

"It's something that's only in Japan," said Sayuki. "It's very unique and very special. It's like a total celebration of Japanese culture in general."

"400 years ago, the geisha were men," said Sayuki. "They were much like jesters were in the days of Henry the Eighth. They were funny men and did comic skits. One of the women in the district decided she was just as good at the instruments as the men were and started wearing men's jackets which was very radical at the time. She declared herself a geisha too. So, she must have been quite a character I think. She was the first one. After that, it took about 60 years before most of the geisha were women rather than men," said Sayuki.

Credit: WTHR
Sayuki is a native of Australia and said she is the first white woman to become a geisha.

Sayuki now has permanent residency in Japan, a requirement to being a geisha. She is now both geisha and geisha mother in Fukagawa, the oldest geisha district in Japan.

She has three geishas living in her home.

"Everything is learned by example by the geisha mother," said Sayuki. "They learn to wear kimono, and comport themselves in a Japanese environment, how to sit and stand and interact with people in the community and customers - everything they need to know to be a geisha," said Sayuki.

Tazusa is one of the women living in Sayuki's home is in her 20's. She is known as a maiko, the Japanese word for geisha apprentice.

"I like to makeup with white and wear the lovely kimonos," said Tazusa.

Tazusa is a university graduate who spent time studying English abroad. She was already skilled playing one of the musical instruments the geisha play. She wants to become a geisha to revive the Fakagawa Japanese culture.

"We have more than 400 years history," said Tazusa. "Recently, Japanese people didn't have an interest in Japanese culture. Me neither. However, I started to play Shamisen (Japanese guitar) and I thought I had the responsibility to revive and spread the beautiful culture and I thought about starting to be geisha."

"There's many girls who come back from being abroad and they realize they are missing something Japanese. They don't know enough about Japanese culture. Foreigners ask them and they can't answer. They come back and want to be more Japanese," said Sayuki.

Now, Tazusa is on the verge of becoming the first geisha in her family.

"I moved to this district five years ago," said Sayuki. "We have only a couple of geisha. They're in their 70's and 80's. They've just passed on the important music and dance which were only in this district on to the younger ones like Tazu San."

Music is one of the foundations of being a geisha. Sayuki is a flute specialist.

"We have a drum teacher. Dance teachers. We have some kind of lessons," said Sayuki.

Geishas can take three hours to get ready. That includes putting on the iconic white makeup.

The other traditional colors include red lipstick and black eyeliner.

"It's the reddist lipstick that exists. It's much redder than any western lipstick," said Sayuki.

This young geisha will wear a wig. The kimono, the belt, known as the obi, and the ornaments add up.

"One geisha fully dressed up can be wearing $10,000 worth of clothing," said Sayuki.

Once the geishas are ready, they catch a ride to the evening banquet which take place at exclusive restaurants.

"At a geisha banquet, you get to see the most beautiful of traditional architecture," said Sayuki. "You see the art and paintings on the walls. You see the beautiful geisha kimonos. You experience Japanese cuisine and Saki and dance and music. It's a totally intense Japanese cultural experience."

"A geisha's job and our happiness is to make each guest a friend," said Tazusa. "We'd like to make best memory in Japan for them."

Sayuki acknowledges there is still a misconception about geisha.

"I think in the west, there's been a lot of confusion between geisha and courtesans," said Sayuki. "In old Japan, there was an old description called courtesan which was a high-class prostitute. Because foreigners couldn't tell the difference between a geisha and a courtesan dressed in kimono, there was a lot of confusion and caused by that. Courtesans no longer exist in Japan. In 1957, anti-prostitution law was introduced. Geishas were always musicians and dancers. Geishas were not allowed to sell their bodies. Geisha means artist, literally. And that's what it is. No more. No less. Geisha are artists. Dancers and musicians."

There are challenges facing this profession. Once there were 80,000 geisha in Japan. Now, there are fewer than 2,000 in the Olympic host country, according to Sayuki.

"Here in Fukagawa, five years ago the numbers were down to just five geisha in their 70's and 80's," said Sayuki. "Now, we're going to be ten very soon. Obviously at some stage, other forms of entertainment became popular culture and the geisha became traditional culture. So, like classical music, its not mainstream. It's not going to disappear anytime soon."

She offsets the cost of training charging foreigners approximately $60 to watch the geishas take lessons or get ready for a banquet.

"The lesson fees for young geisha are very expensive," said Sayuki. "It's hard to finance for the young geisha. You have to train first. So, we decided to open our lessons to foreign tourists so they can watch. They've had something like that in the sumo world. But, this is the first time we've done it. It's a charity project. All the proceeds of inviting tourists to watch our activities go straight into geisha training. It provides some income from older members of community who are teaching us. And, it helps support the young geisha training."

"We perform at private parties or restaurants or trade fairs. We want to do a geisha roadshow in America," said Sayuki.

Tazusa says she likes being able to perform the same way women did 100 years ago.

"People look at me like a celebrity. I'm always excited. People in the town, all people look at me, some people take a photo of me. It makes me feel like I'm back in the Edo period," said Tazusa. "Being geisha is still like a dream job."

"It's been an amazing experience to become a Geisha," said Sayuki. "I think so many things are a value in any aspect of life. Dealing with people, entertaining people, keeping your customers happy, finding new customers, reviving a Geisha district involves a lot of modern business as well. I think it's a wonderful path to self development."

Sayuki says she has been able to continue other interests too.

"Becoming a geisha doesn't mean that you have to give up everything modern. One year after I became a geisha, I was given the opportunity to lecture at University which was the job I had before I became a geisha, she said. "It's been an interesting path. I'm the first geisha to lecture at University. I think it's the first time that a Japanese University has had geisha studies. So, we don't give up the modern world. We're able to do both things at once."