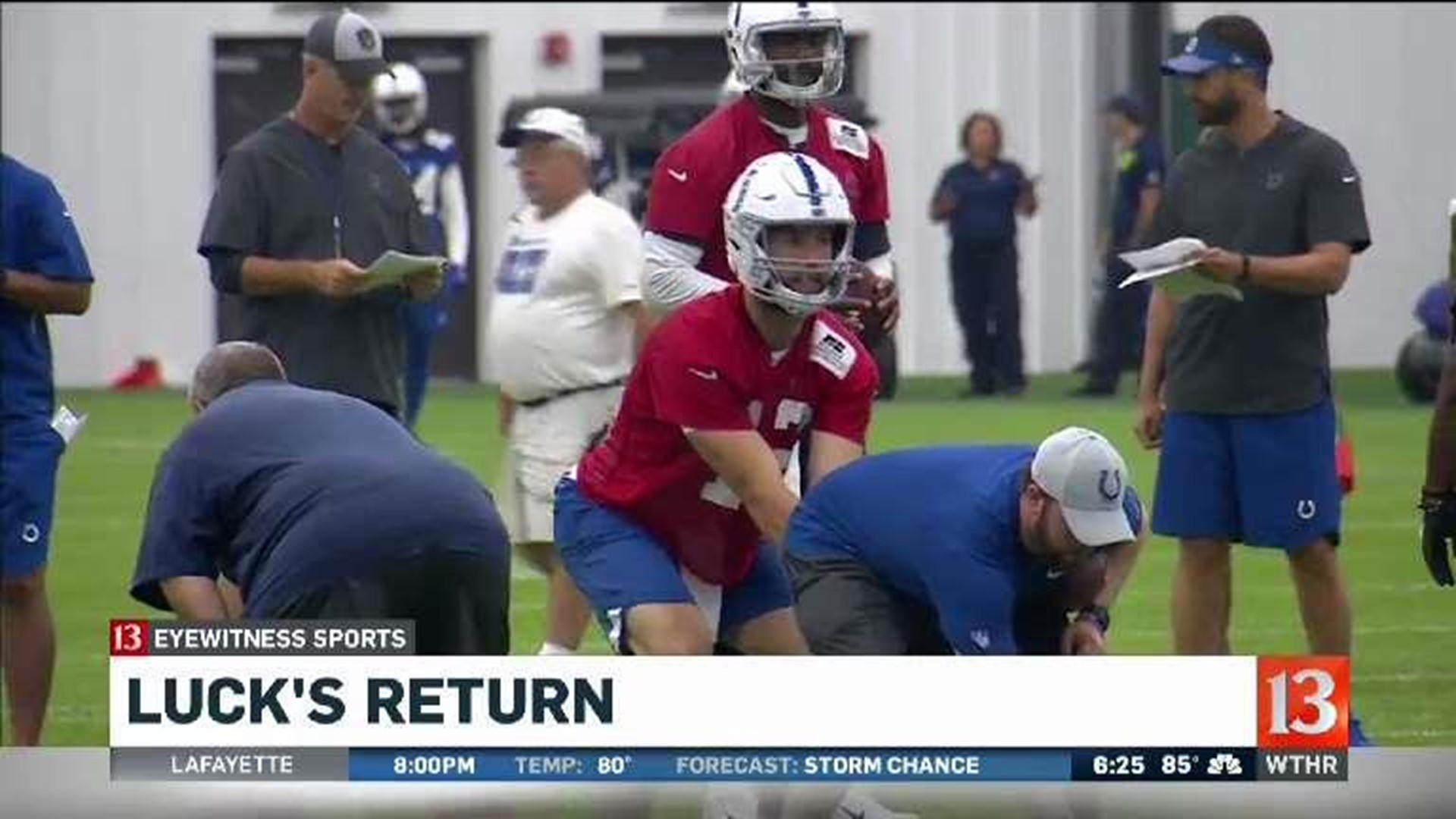 SEATTLE, Wash. (WTHR) - The NFL is back and a familiar face is under center for the Indianapolis Colts.

Andrew Luck will start at quarterback for Indianapolis, 19 months after a shoulder injury sent him to the sidelines, as the Colts face Seattle.

Century Link in Seattle. Where it’s really, really hot. Like Midwest hot. Colts-Seahawks at 10 Eastern. Follow me at @bkravitz. pic.twitter.com/MRrgFAsDt9

Kickoff is scheduled for 10 p.m.

10:07 p.m. - Andrew Luck came out throwing Thursday night, tossing his first pass to running back Marlon Mack on the first play of the game, then firing incomplete to T.Y. Hilton on the sideline on the following play.

10:17 p.m. - Luck finished his first drive in more than a year completing five of seven passes for 57 yards. He also bounced back up after taking a hit at the end of a 1-yard-run.

A sight for sore eyes: Luck makes all the basic throws and Vinatieri kicks the field goal after an 11 play scoring drive. Luck took a hit and bounced right back up. Promising start.

Adam Vinatieri kicked a 33-yard field goal to cap the drive and give Indianapolis a 3-0 lead.

10:28 p.m. - Seattle took the lead on their first drive, marching 75 yards in 12 plays, scoring on a Russell Wilson touchdown pass to Nick Vannett for the 7-3 lead.

Nice to see Luck stepping up in the pocket and making throws. Except for the one hiccup, a sack given up by Haeg, the O-line has done a nice job.

Mack left the game with a hamstring injury after the first drive.

10:47 p.m. - Nate Hairston intercepted Austin Davis in the end zone to keep Seattle off the scoreboard on their second drive.

10:50 p.m. - Jacoby Brissett entered the game for the Colts third drive of the game, ending Andrew Luck's night in Seattle.

Jacoby Brissett is warming up and looks like he'll be coming into the game. Luck, the Colts and Colts fans have to be ecstatic. Luck was 6 of 9 for 64 yards. Led two scoring drives. Now we'll have to see how he feels tomorrow and the next few days.

11:58 p.m. - Rookie Mike Badgley kicked a 34-yard field goal to give Indianapolis a 12-10 lead late in the third quarter. Phillip Walker drove the Colts 60 yards in 12 plays to set up the field goal.

12:57 a.m. - Seattle recovered a bad snap in the end zone for a touchdown to close to 19-17, but the Colts ran out the clock to claim the preseason victory.