Two weeks after the Indy 500 was run with no fans in attendance, the NHRA U.S. Nationals were held under strict social distancing guidelines. 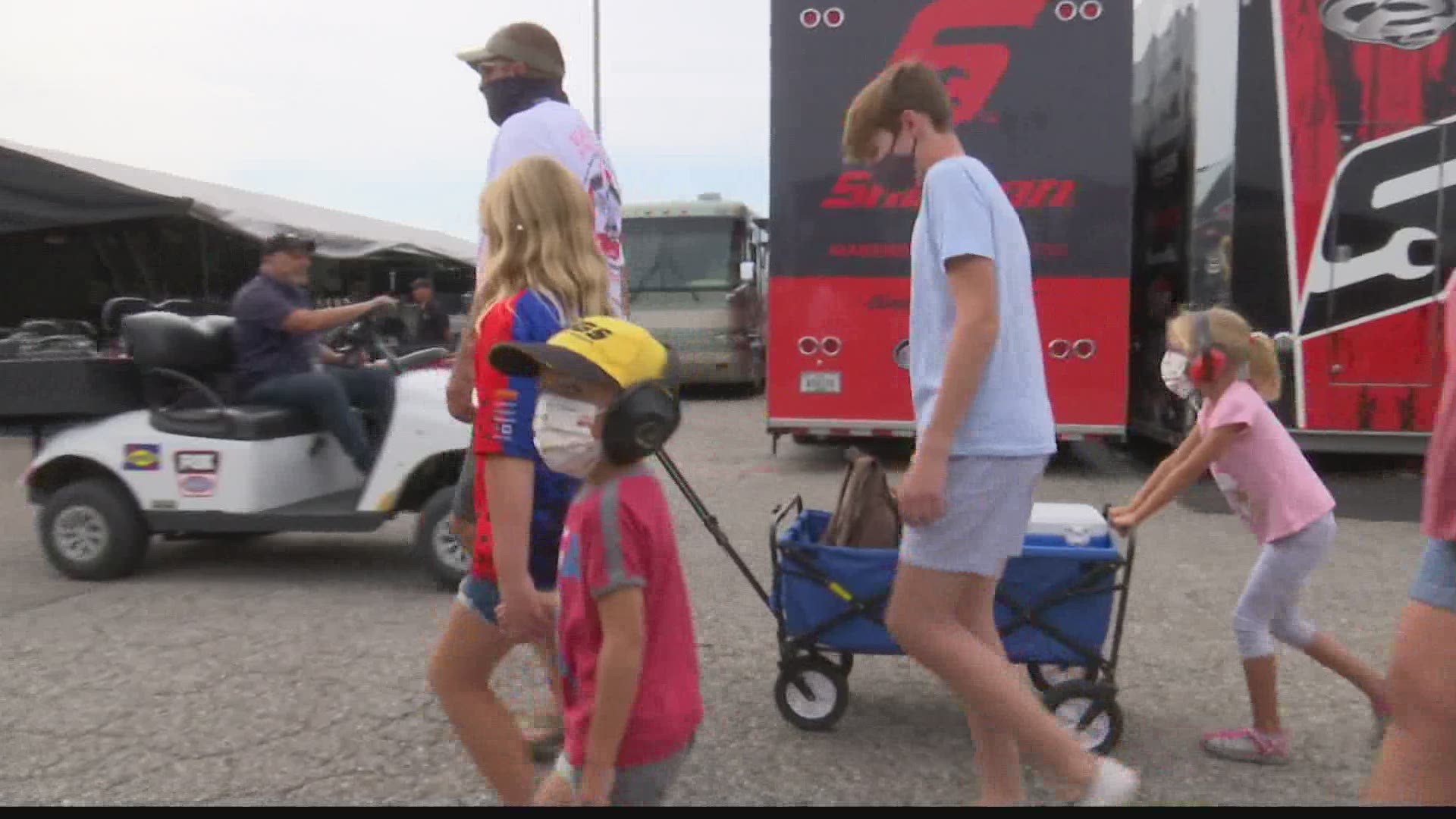 The Swenson family felt safe walking through the pits Sunday morning after the first round of final eliminations.

"The NHRA has put in the masks (requirement),” said Rachel Swenson, in attendance with her husband and four children. “They have all the stations set up for the hand sanitizing. So, I’m really happy it's in Hendricks County, not Marion County."

No fans were allowed at the Indianapolis Motor Speedway in Marion County for any of the Indianapolis 500 practice, qualifying or the race. But just two weeks later, and just a few miles to the west, thousands of fans enjoyed the biggest drag race of the year.

Three generations of the Purdin family from Wisconsin came to the U.S. Nationals since they were denied entry to the Indy 500.

"We were all set to come to the 500,” said Jim Purdin. “We were among the fans that committed to come to the race until they pulled the plug on it there a couple of weeks before it. I think the measures that people are putting in place and the care that they're taking keeps us all safe."

Ten-year-old Owen Purdin's first Indy 500 will have to wait another year.

"I’m a little disappointed that I couldn't go to the 500, but this is a pretty good substitute for that,” said Owen.

Crowd capacity was limited to 50 percent at Lucas Oil Raceway. Fans spread out in the stands. Most wore masks most of the time.

"We need this,” said Top Fuel driver and 10-time U.S. Nationals winner Tony Schumacher. “We need people to be able to come out. We need to get back to some sort of normalcy, and we're doing it in the greatest sport in the world."

"We were expecting temperature checks upon entry, which is great,” said Sean Miller, a race fan from Carmel attending with his son, Jack. “You know it's part of standard process and masks, of course. So, we're just prepared to comply with those standards with safe distancing."

The U.S. Nationals is called the "Big Go," and fans were grateful they got to go. The event usually holds final eliminations on Monday, Labor Day. But the event concluded Sunday this year.

Langdon backed up his top qualifying effort with a run of 3.705-seconds at 326.32 mph to beat Leah Pruett in the final round. Langdon collected his 17th career win and second win at Indy.

Funny Car points leader Beckman went down the track in 3.908-seconds at 327.35 mph to beat J.R. Todd in the final round. That’s two wins this season and 32 career wins for Beckman. Brownsburg based Don Schumacher Racing has won nine straight Funny Car events dating back to last year.

A year after losing in the final round, defending world champ Enders rolled to the Pro Stock win with a run of 6.606-seconds at 208.55 mph. Enders is now a two-winner in the U.S. Nationals.

In Pro Stock Motorcycle, Pollacheck followed up his top qualifying effort with his first career victory. Pollacheck beat Andrew Hines in the final round with a run of 6.790-seconds at 200.53 mph.