Woman in the war zone: Iraq veteran turned to Army for 'adventure' after mom's death

For Rhonda Seward, joining the Army was a spontaneous decision to get block the pain from the loss of her mother. She stayed in for 23 years. 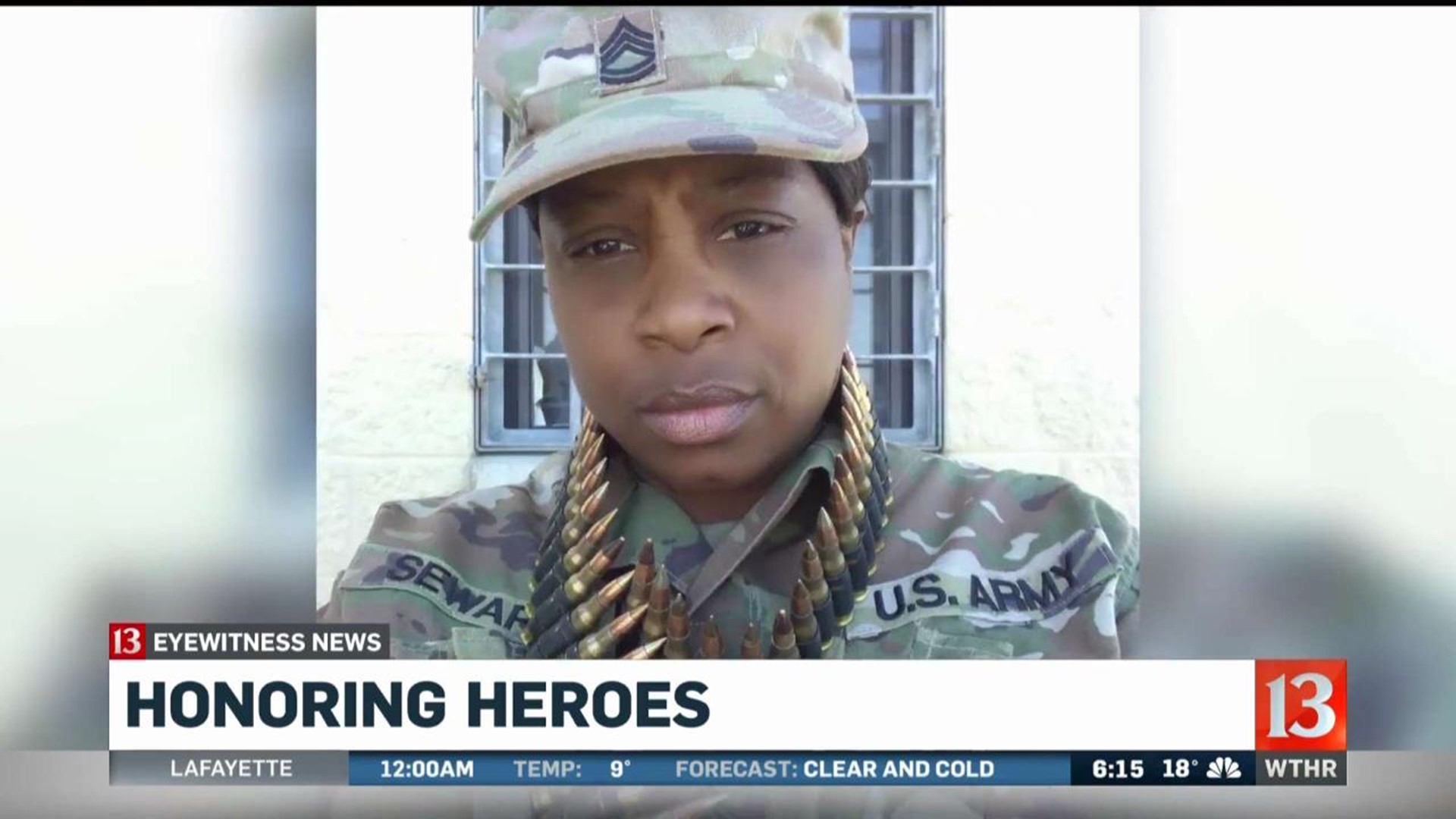 INDIANAPOLIS (WTHR) — Rhonda Seward grew up a tomboy. She climbed trees in her dresses, played sports and roughhoused with her brothers.

She had had toyed with the idea of joining the military, but for her, it was always a challenging adventure. But when she was hit with a life-changing event, she knew she needed an escape, and the military gave her that.

Seward's mother died in 1996, and enlisting in the Army was a sudden decision for her to get away from it all.

"I took it really, really hard," Seward said. "(Joining the military) was kind of a getaway-type decision. So, I ended up going off to Ft. Jackson North Carolina, May 15th of 1996. And I just kind of joined the army abruptly," said Seward.

Seward said she enjoyed the military and being able to achieve and experience the adventures many civilians often daydream of. But it also taught her lessons about teamwork and responsibilty in a way she couldn't learn elsewhere.

"The military pushes you to the extreme. You don't want to let your teammates down by failing, so even if you're hurting or tired or whatever, you're at the grind because you want to be a part of that team," she said.

Woman in the war zone

Women have a long history of serving their country throughout U.S. history. A Department of Veterans Affairs report said some women historically disguised themselves as male soldiers, even as early as during the American Revolution and Civil War.

By World War I, the military had implemented physical exams for service members, making it impossible for women to maintain those disguises.​ Still, more than 23,000 women served as Army and Navy nurses during WWI.

By the early 1990s, more than 40,000 women were deployed in the Persian Gulf War, and the public was starting to see more female military members.

It wasn't until 2013 when the Department of Defense lifted the ban on having women in ground combat. Seward had been in the Army for more than a decade at that point, but she said putting women in an all male unit is a "massive adjustment."

In war zones, however, gender wasn't an issue for her.

"You're trained and designed to function as a team. When you grab a weapon and jump in a fox hole, you're not really thinking about man and woman," she said.​

She said one of the challenges is extra protection against sexual harassment. But female service members also face another challenge of the physical strain on their bodies.

"In my opinion, there are some things that aren't designed for women," she said. "To say women can't do it, no, but I just think it's wear and tear on the body over time."

Equipment is a different issue. The chest plates "just crunch everything," and Seward said it's hard to find the right size.

"And the boots — a lot of time women have to get them specially ordered because they come in men's sizes. They're starting to make them in women's sizes."

She and other female service members used to rip out the inside of the shoe and put in their own shoe insoles. Seward said she sometimes wore extra socks to make the shoes fit better.

Seward got the call to deploy to Iraq in February 2004. At the time, she was based at Fort Bliss in El Paso, Texas.

"We ended up getting dropped off in Kuwait, bringing all our equipment, leaving behind our families and that's when all the details of war started to make sense," she said.

Rhonda Seward, second from left, was deployed to Iraq to serve with the U.S. Army. (Rhonda Seward)

"When you're in combat, no matter how far away you are from the actual firefight you're still in a war zone. 'Cause things were going on from bomb threats to the enemy trying to sneak in the gates, to poisoning of troops in the dining facility," Seward said. "You had to be alert all the time."

Seward was a sergeant, meaning her responsibility was massive. She oversaw 10 soldiers and had to make sure each of them came home safely.

"I went 'round and 'round in my head of what would I do if I had to make that call. And I wasn't prepared for that. So I worked around the clock," she said.

She only lost one: Thomas Garces. He was her "battle buddy."

"He was the only one in our unit that got killed," Seward said. Garces was his parents' only child. "Yeah, that was rough."

When asked how you get over a loss like that: "You don't."

Seward's year-long deployment was constantly on-the-go. But once it's all said and done, there's relief about accomplishing the mission sets in.

"The downside is you never return from that," she said.

Before joining the military, Seward saw it as an a traveling adventure. "Jumping out of planes, swimming, building bridges over troubled water, that type of thing," she said.

But after retiring from 23 years of service, she knows the Army was much more than just traveling to different places.

"Of course, there's the whole reality of war, of going to combat," she said. "But the military was fun for me."

Through all the fun, Seward noticed how the military changed her, too. She was a self-professed shopaholic and party animal before joining the Army. She had dreams of performing on Broadway.

"After I came back from combat, I was changed. I was different. And I noticed it immediately," she said.

Coming home after a year of having to be alert, vigilant and ready to fight is a difficult transition.

"You know I didn't really get scared until I came home," Seward said.

When Seward returned from Iraq, she said she was returning to a post 9/11 world. It was totally different from the world she grew up in as a child — a world she took for granted.

She said it was clear that sense of security America once felt "was gone." She said initially didn't know how to function. She now suffers from a sleep disorder and PTSD.

Even at a ball game, she's on high alert.

"I'm looking for the sniper on the building or what happens if someone (poses a) bomb threat. What do I do? What's my responsibility to the American people?”

Even as a civilian, Seward is concerned with protecting her country.

"I'm still a soldier. I'm trained always a soldier. And in my mind, I will defend, if it comes to having to address the issue of terror, an issue of violence, if I'm in the area, I'm going to do what I'm trained to do."

But with all the pain and sacrifice Seward has endured for her country, she said that if she had to do it all over again, she would.