A manager at a north Indianapolis apartment complex is in trouble after video of a heated conversation involving an off-duty police officer went viral. 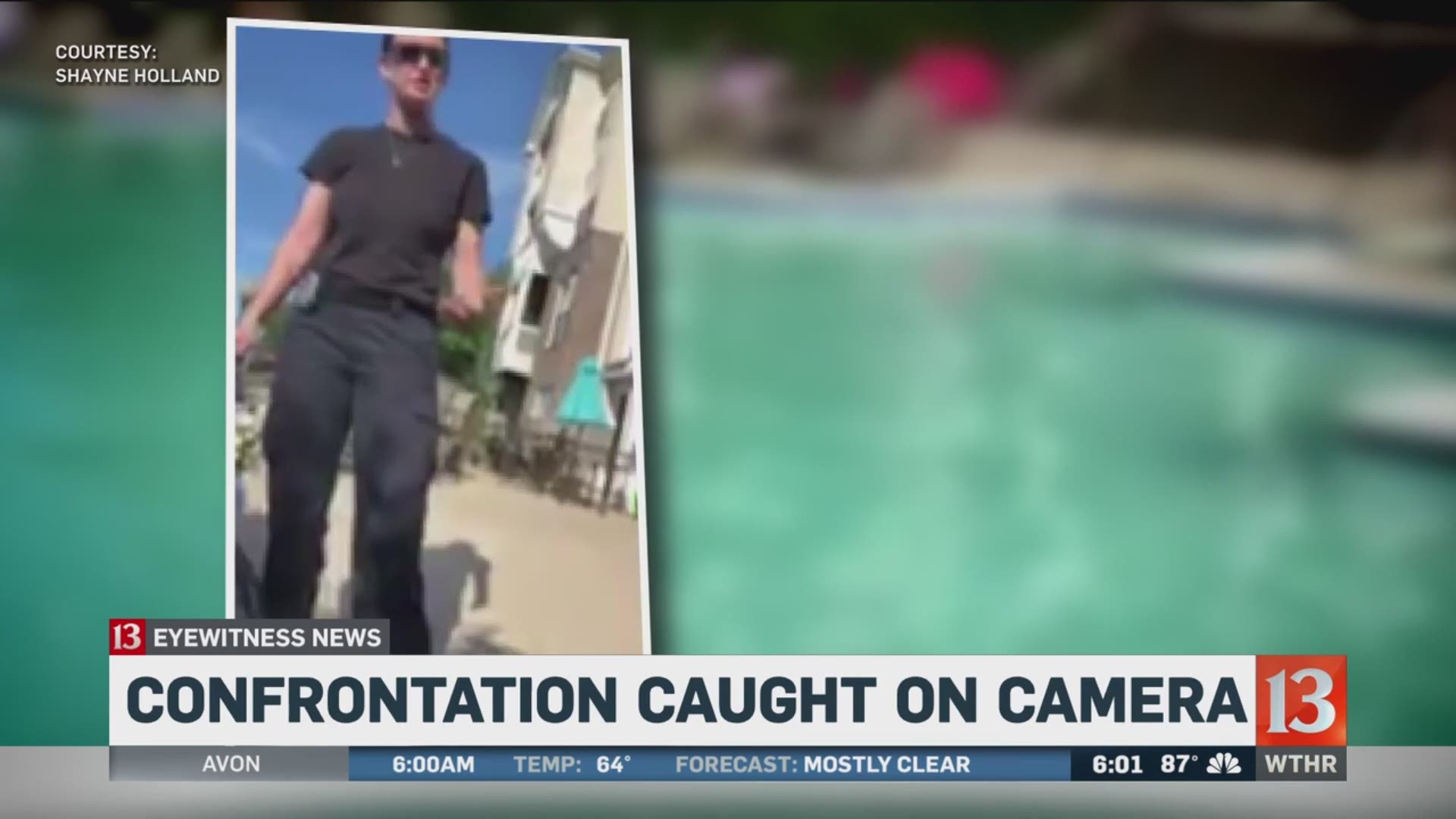 INDIANAPOLIS (WTHR) - A manager at a north Indianapolis apartment complex is in trouble after video of a heated conversation involving an off-duty police officer went viral.

The video is from the River Crossing at Keystone apartments near 96th Street and N. Keystone Avenue. Resident Shayne Holland recorded the video with his cell phone when he was approached by the officer.

It has been shared thousands of times on social media.

13 Investigates has learned that as a result of what happened, the apartment manager is in trouble.

"I showed you my proof of residency," said Holland.

Holland was at the apartment complex's swimming pool when the incident occurred. He's lived more than a year at the complex, where he uses a key fob to gain access to the weight room and swimming pool area. After working out one day last week, Holland shared with 13 Investigates that the officer questioned his residency even in the presence of the apartment manager, who alluded to him jumping the gate around the pool.

I actually live here, so I’m assuming they told the police that it’s not too many black people that do so if you see one make sure you get their address. RiverCrossing Apartments. pic.twitter.com/IgOx3DByUi

In the cell phone video, Holland and the officer, who was working off-duty, argue with each other about him being at the pool. Holland believes his key fob should have put the issue to rest.

"I would not have been able to get in the door without the key. Is that true? Yes or no?” he asked on the video.

The video shows the officer snatching Shayne's pool gate key fob. He explained why he didn't react on purpose. You can see in the video how Holland remained in the lounge chair at the pool after the officer's actions.

"Anything that I do, she could say, 'I felt like my life was in danger'," Holland said.

I actually live here, so I’m assuming they told the police that it’s not too many black people that do so if you see one make sure you get their address. RiverCrossing Apartments. pic.twitter.com/IgOx3DByUi

The apartment manager is also recorded. She came from the office building to share with Shayne that this mother's purse was still in the office from her mistakenly leaving it the day before. Shayne expected his dialogue with the apartment manager would have given the officer yet another clue that he is a resident with the right to be at the swimming pool, as proven with showing her the key fob she took from him.

But to his surprise, the apartment manager is seen on video raising her voice at the tenant. Then she asked him to leave the pool, citing that she has the right to revoke any tenant's privileges to the pool.

But when 13 Investigates went to interview the manager at the River Crossing leasing office, she had left for the day. Two staff members shared with 13 Investigates that the apartment manager would not be returning to the office.

"Our manager is now on leave, so she is no longer in the office," said the staff member.

The company overseeing River Crossing confirmed by telephone that the manager seen in Shayne's video is on leave and under investigation.

In a different video involving Shane's mother, he says the officer showed much respect, apologized, but still asked her to leave the pool.

SHANE'S MOTHER: "We are not allowed in the pool until further notice for what?”

Implicit bias is a huge part of officer training at IMPD. 13 Investigates learned from the chief's office at IMPD that they're awaiting a formal complaint from Shayne and his family.

"After a couple of days of the same thing, I think that there was some directive that there are not a lot of African-Americans that live in this community," Shayne said.

13 Investigates has also learned that although IMPD has identified the officers in the video, the department has not taken any kind of action against them nor stated that they did anything wrong.

Many apartment complex managers hire real police officers to work off-duty security at their facilities. In some cases, it's in exchange for a free or reduced leasing rate.