Only 12 men remain living who are survivors that sailed aboard the U.S.S. Indianapolis in World War II. 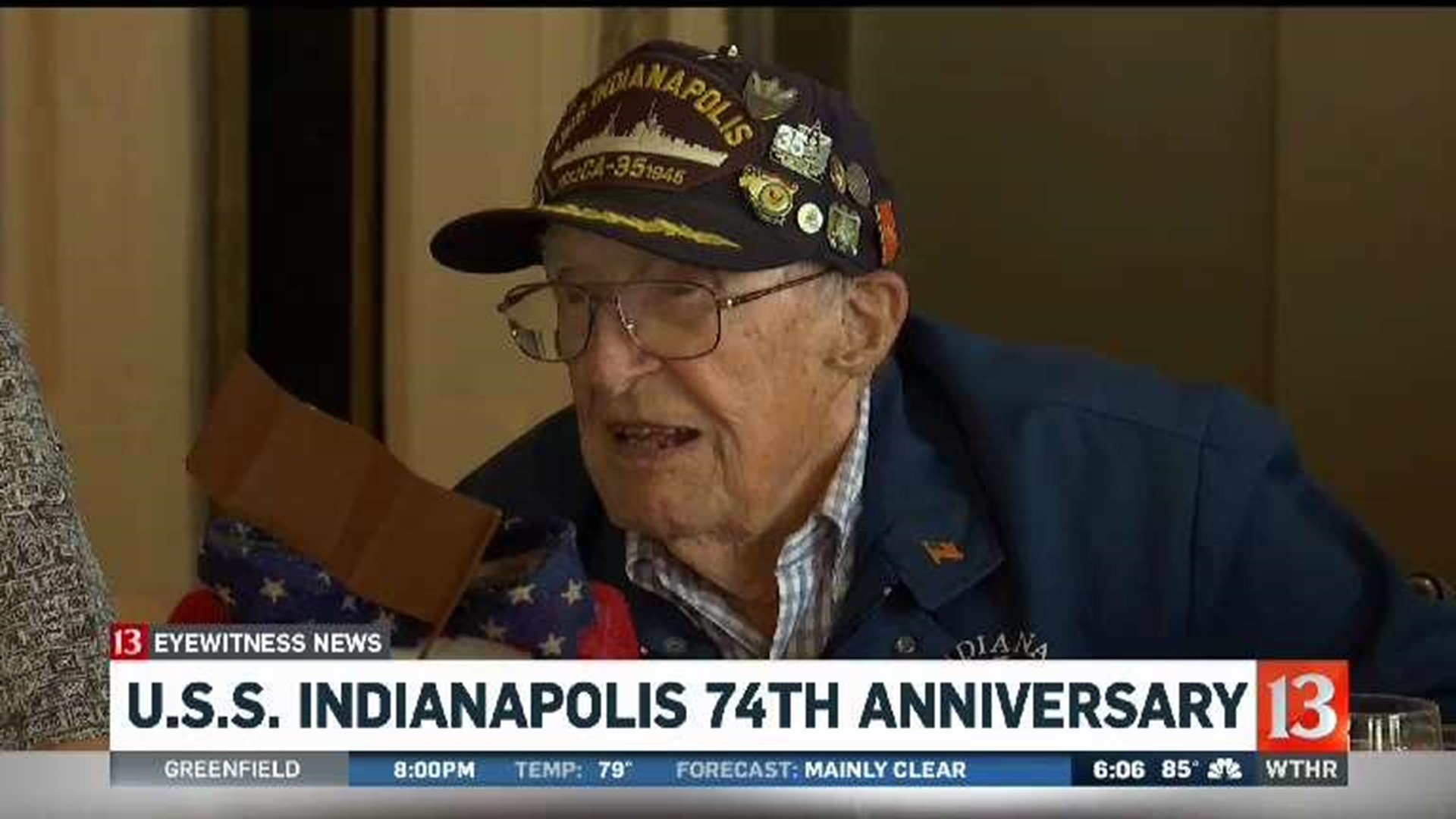 INDIANAPOLIS (WTHR) – Only 12 men remain living who are survivors that sailed aboard the U.S.S. Indianapolis in World War II. Seven of them are gathered in Indianapolis this weekend for what has become an annual reunion that shrinks in size each year.

All the survivors are all in their nineties. They gather to remember July 30, 1945, when two torpedoes from a Japanese submarine sank their ship in 12 minutes, leaving hundreds of men adrift in the Pacific Ocean.

Harrell floated in the ocean with a group 80 men on the Sunday night of the attack. Only two survived to be rescued on Friday.

"Twice a shark poked me right in the life jacket, where the shark's eyeballs and my eyeballs are about this far apart," said survivor Dick Thelen, holding his hands about shoulder width apart. "I was saturated with diesel fuel, and they don't like the smell of diesel fuel. So, they sniffed me over and left. I was lucky."

Harold Bray is the youngest living survivor. Now 92, he was just 17 years old and only four months at sea when the U.S.S. Indianapolis was attacked.

"There's always something that reminds me," said Bray. "I turn the water on. I never get in the bathtub. I always stand up. I don't even swim in my pool in the backyard."

The U.S.S. Indianapolis National Memorial on the downtown canal lists the names of the nearly 1,200 men who were aboard the ship for its final sailing. A star next to the name indicates a survivor of the attack and nearly five days in shark-infested waters. Only 317 names have stars next to them.

Harrell is one of just a dozen survivors pulled from the sea and still living to share his story.

"It's not because I was a Marine and certainly not a good swimmer,” said Harrell during a luncheon at the Columbia Club. "I was just a country boy from Kentucky. I think the good Lord had pity on me."

Just days before sinking, the U.S.S. Indianapolis delivered critical parts of the atomic bomb to the island of Tinian. The war ended just a few weeks after the ship sank.

"If we didn't do what we did, we could have lost that war," said Thelen, from Lansing, Michigan. "A lot of people don't realize how close we were to losing the war."

Only a few survivors remain, but Indianapolis remembers with a museum at the Indiana War Memorial and the National Memorial on the canal.

The new U.S.S. Indianapolis is commissioned this fall in landlocked Indiana. The ship was christened and launched in April into a river in Wisconsin. The combat ship was built in a Marine yard.

On October 26, the U.S.S. Indianapolis is commissioned at the Port of Indiana in Burns Harbor on Lake Michigan. Several dignitaries will attend, including Jill Donnelly, the ship's sponsor and the wife of former U.S. Senator Joe Donnelly.