The suspect in a SWAT standoff on Indianapolis' far northeast side Monday afternoon has been connected to recent shootings at IMPD headquarters and the September murder of an 82-year-old Zionsville man. 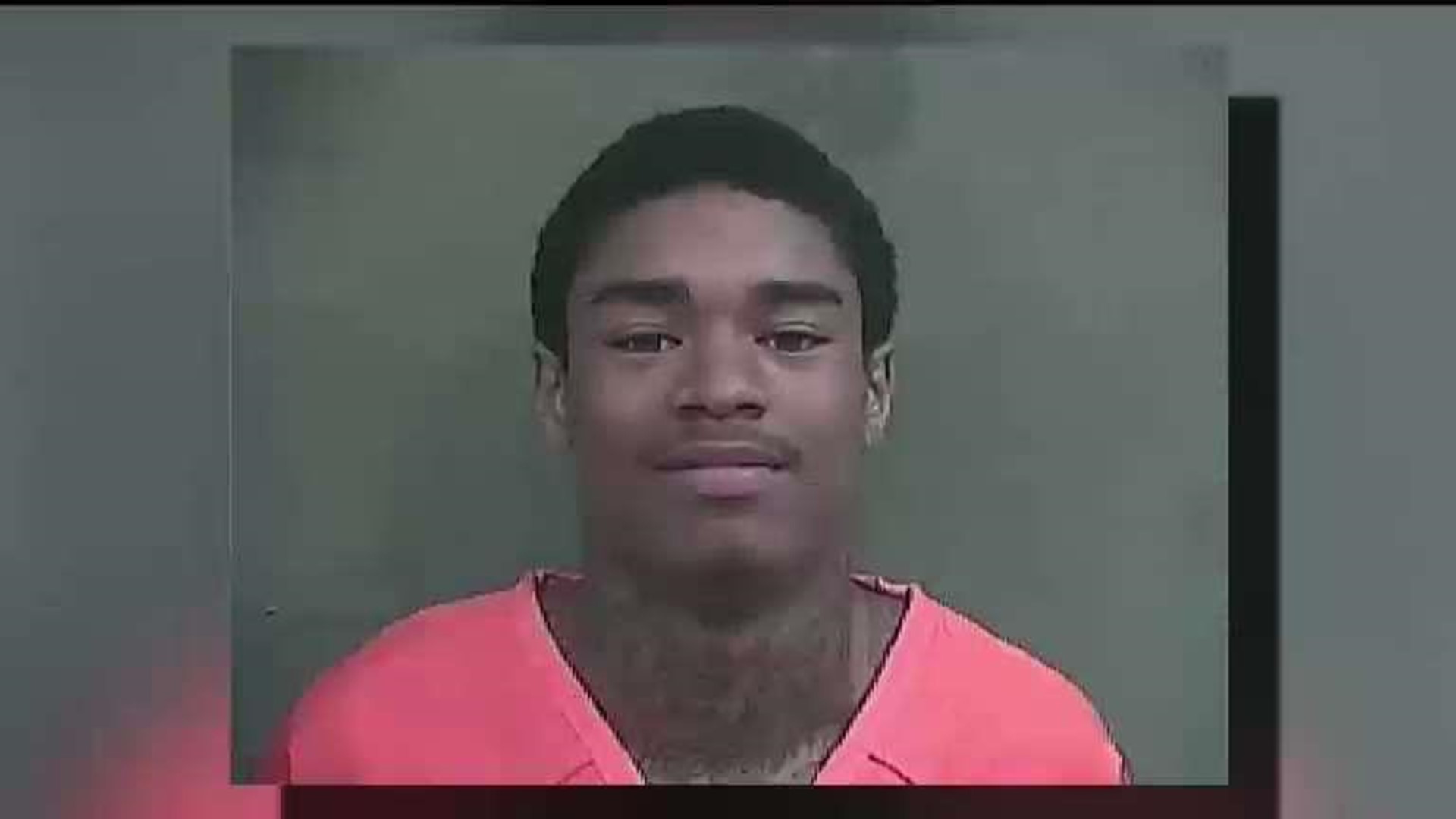 INDIANAPOLIS (WTHR) - The suspect in a SWAT standoff on Indianapolis' far northeast side Monday afternoon has been connected to recent shootings at IMPD headquarters and the September murder of an 82-year-old Zionsville man.

Damoine Wilcoxson surrendered peacefully around 4:15 p.m. after a hours-long standoff with IMPD at an apartment complex near Shadeland Ave. & Mill View Dr.

Wilcoxson was holding his 6-month-old son inside the apartment during the standoff. The boy's grandmother stood across the street during the ordeal, waiting alongside everyone else and hoping he would be okay.

Thankfully, Wilcoxson handed the boy over to police when he surrendered. The boy appeared to be okay but was taken to the hospital to get checked out just in case.

Wilcoxson was armed during the standoff and police say he fired at officers through the door. No one was injured and officers did not return fire due to concerns for the child.

"Just loud booming going off, so I grabbed my kids and we were against the wall in my bedroom," Crystal Thompson said. She and her two kids were trapped in their apartment right next to Wilcoxson's.

"I was scared for my kids, and I didn't know what was going to happen. I was thinking, 'Oh my god, is he going to bust through the door?'"

SWAT officers eventually rescued Thompson and her kids as they worked to clear the apartment complex.

Prosecutors say Wilcoxson faces a murder charge for the shooting death of John Clements less than half a mile from Zionsville High School on Sept. 28. It was the first murder Zionsville has seen in 20 years.

"We are relieved that the Boone County Prosecutor has been able to file charges in the murder of our father. We are very thankful to the Zionsville Police Department, the Indianapolis Metropolitan Police Department, the Indiana State Police, Federal Bureau of Investigation and others involved in the investigation. Their diligent work brought this to a quick resolution so that others would not be harmed. We are also very thankful to our friends and neighbors in Zionsville who were able to provide information to the police related to the investigation."

- The family of Jac Clements

According to court documents, investigators believe Wilcoxson is also related to the IMPD headquarters shootings that occurred on October 4 and October 13. Detectives found handwritten notes demanding $100,000 and threats including "white must die" near the shell casings that were connected with the Oct. 4 shooting at IMPD Northwest District headquarters. Similar notes were found near the shell casings discovered after the Oct. 13 shooting at IMPD North District headquarters.

"At least in one of those shootings, we believe that he intentionally targeted two police officers inside," IMPD Chief Troy Riggs said, "and we're going to be requesting attempted murder charges."

He allegedly fired almost 50 rounds at those police stations earlier this month. No officers were hurt, but he allegedly left a note at the crime scene threatening more shootings if he didn't get $100,000.

Detectives discovered that the shell casings from both IMPD shootings were a match. A DNA sample from one of the notes and a shell casing matched Wilcoxson's profile.

Court papers say forensic evidence links his gun to all those cases, but his stepfather says, "No, no, no, he's not."

The stepfather doesn't believe Damoine is connected to those crimes.

Damoine Wilcoxson's stepdad says his stepson had nothing to do w/ the Zionsville murder & IMPD HQ shootings. More info on @WTHRcom at 530&6 pic.twitter.com/aZZVKrU9Fe

FBI undercover agents friended him on Facebook during the probe into the police station attacks and the Zionsville murder. According to court documents, they found anti-white remarks and posts like "Kill mankind. No one should survive. We all live in lies," plus "eye-4-eye, tooth for tooth, head for head, life for life."

For Crystal Thompson, Wilcoxson's neighbor, to think this was the guy next door, "It's scary. Because I didn't know I lived next-door to a murderer or anything like that. You don't know who you live next to."

"As one can see from the Probable Cause Affidavit Wilcoxson is an angry individual who was looking to do harm to innocent people. I am relieved to know that he is now in police custody. My office will now get to work to see that justice is served and that he is successfully prosecuted and convicted for this horrible crime that he is alleged to have committed" Prosecuting Attorney Todd J. Meyer said in a statement.

Also, Wilcoxson was the subject of a police report from July 2016 after he allegedly pulled out a firearm and threatened to kill his girlfriend, who is the mother of his child.

The FBI determined that Wilcoxson was maintaining a personal profile on Facebook as "Frank Lucas." The profile page featured numerous photos of Wilcoxson, and several posts used the same terminology found in the notes from the shootings at IMPD headquarters - including "Yehuah and "Yeshuah." An FBI agent who friended "Frank Lucas" found a post from Oct. 4th, the same day that IMPD's Northwest District headquarters were shot at, which mirrored the threats in the notes found at IMPD headquarters.

The post read, in part, "why should I have to explain myself to you survivors when half of the s--- I say you s---heads won't understand and if you can then woopie f------ do. that just means you have something to say as my reason for killing. and the majority of the audience won't even understand my motives either! they'll say 'ah, he's crazy, he's insane, oh well.'"

Wilcoxson faces up to 65 years in prison and a $10,000 fine if convicted on the murder charge.

Wilcoxson has a long criminal history that includes run-ins with police since he was 14 years old.

He has previous arrests in Ohio for robbery and a 2014 arrest and conviction in Marion County for possession of cocaine.

The warrant police were serving that triggered Monday's standoff was for allegedly holding a gun to his girlfriend's head in August and threatening to kill her.

“This afternoon's events remind us all of the incredible dangers the men and women of the Indianapolis Metropolitan Police Department face while protecting this city. Confronted with peril, these officers acted with bravery and professionalism and I applaud their commitment to ensuring the safety of those involved.

In addition, I commend the investigative work of IMPD, as well as our state and federal partners, who helped to identify and apprehend this suspect. Indianapolis will not tolerate reckless acts of violence, and we remain steadfast in our resolve to keep law enforcement officers and this community safe.”

In an unrelated incident, State Police served a warrant around the same time to a man barricaded inside a home near Stop 11 & Inverness Dr.