Among the many impressive stories emerging from Wednesday's storms is what happened at the Kokomo Starbucks at the Markland Mall. 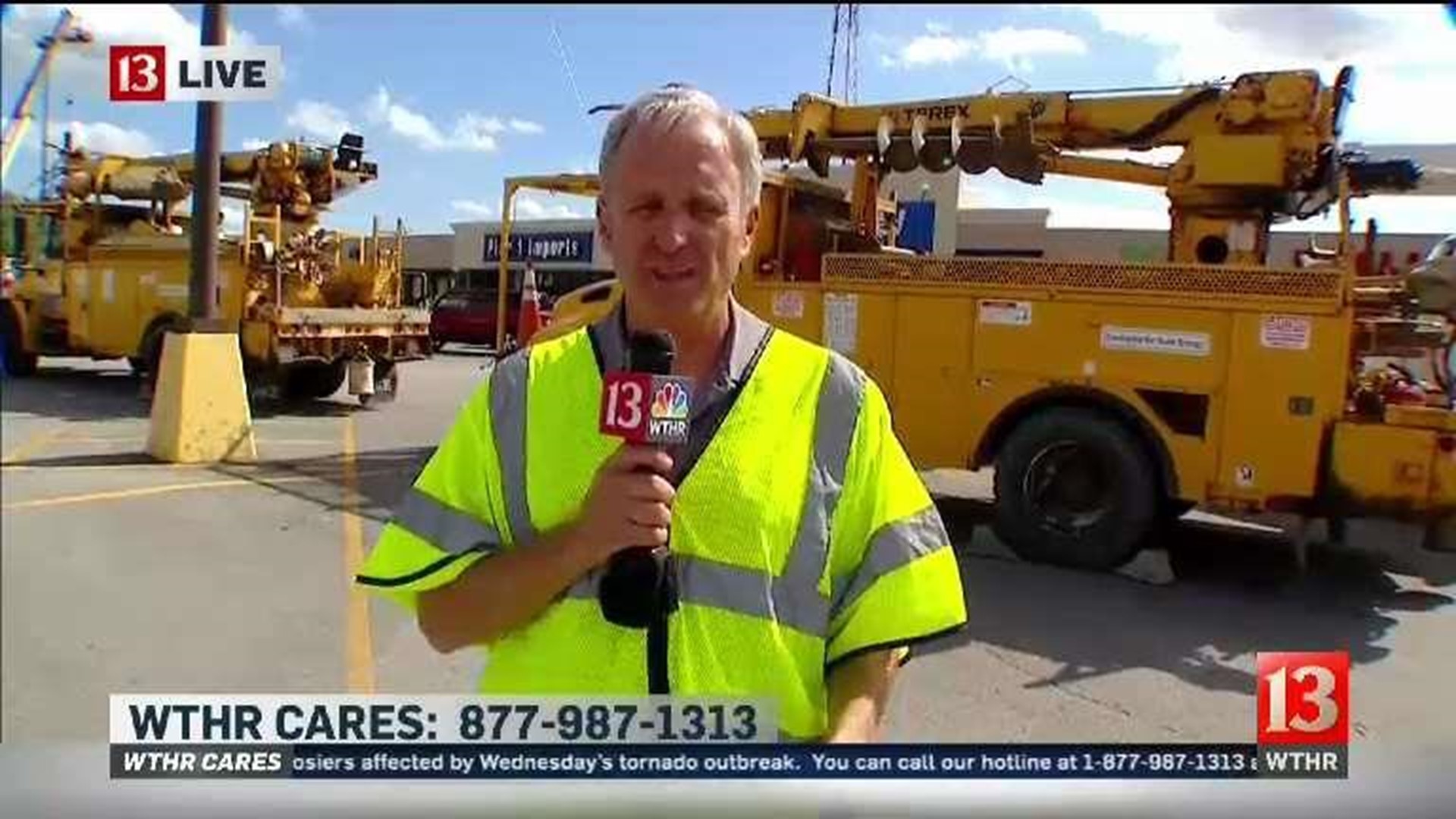 Gov. Mike Pence toured storm damage in Kokomo Thursday, including the Starbucks at the Markland Mall.

HOWARD COUNTY (WTHR) - Gov. Mike Pence called it "nothing short of a miracle" that no one was killed or more seriously injured when an EF-3 tornado struck Kokomo, Indiana Wednesday. In all, eight tornadoes were confirmed in the outbreak.

Among the many impressive stories emerging from Wednesday's storms is Kokomo Starbucks at the Markland Mall, which collapsed as powerful winds moved through the area. The damage was caught on video.

Starbucks manager Angel Ramos instructed everyone to get in the bathrooms. He was not allowed to give an on-camera interview, but he likely saved some lives by following the plan to seek shelter.

Hannah Grace Harris was one of the customers inside Starbucks when the storms struck. She is deeply grateful for Ramos' quick thinking.

"The manager is like, alright, everybody go to the bathroom. We shut the doors. Within 10 minutes, the tornado hit. It was crazy," Harris told Eyewitness News Thursday. "The manager of Starbucks really took control of the situation and got us in the bathrooms. If those cinder blocks or whatever that is hadn't have been as sturdy as they were, I would not be here today. I was by a toilet and it would have taken me out."

Ramos told our newsgathering partners at the Kokomo Tribune he got an alert on his phone, looked out at the sky and knew he had to act. Everyone inside the Starbucks is certainly glad he did.

Harris posted to Facebook, "If it wasn't for him being aware and on the situation, I would not be here writing this post!!!"

"Today at around 3:30 a tornado touched down in Kokomo, IN. I was at the Starbucks there when it hit. The manager came out and told us that there was a tornado that had touched down and it was headed this way and that we needed to take shelter in the bathrooms, this was about 20 minutes before it hit and collapsed all of Starbucks leaving only the two bathrooms where everyone was trapped including myself. If it wasn't for him being aware and on the situation I would not be here writing this post!!! The other guy is a by stander who was just working at chilis and saw the tornado hit us and he took action, he and some other mean pried the door open and got us out! The reason I have a smile on my face and am still alive today is because of these two guys and the others that helped get us out. I don't know either of their names but, they saved mine and others lives today!! If you guys could please just share this and pass it around so that they can be recognized that'd be awesome. God truly was with me today along with my guardian angel."

One of the women who sought shelter in the bathroom shared video with Eyewitness News of the moment witnesses came to their rescue. The video from Tamara Beachy shows a man unscrew the door from its hinges and open a path for the customers and Starbucks employees to walk out of the rubble, shocked at what they saw outside.