13 Investigates warns you about new scams all the time. Now the Indiana Secretary of State wants to warn you, too, and it has a new tool to do that. 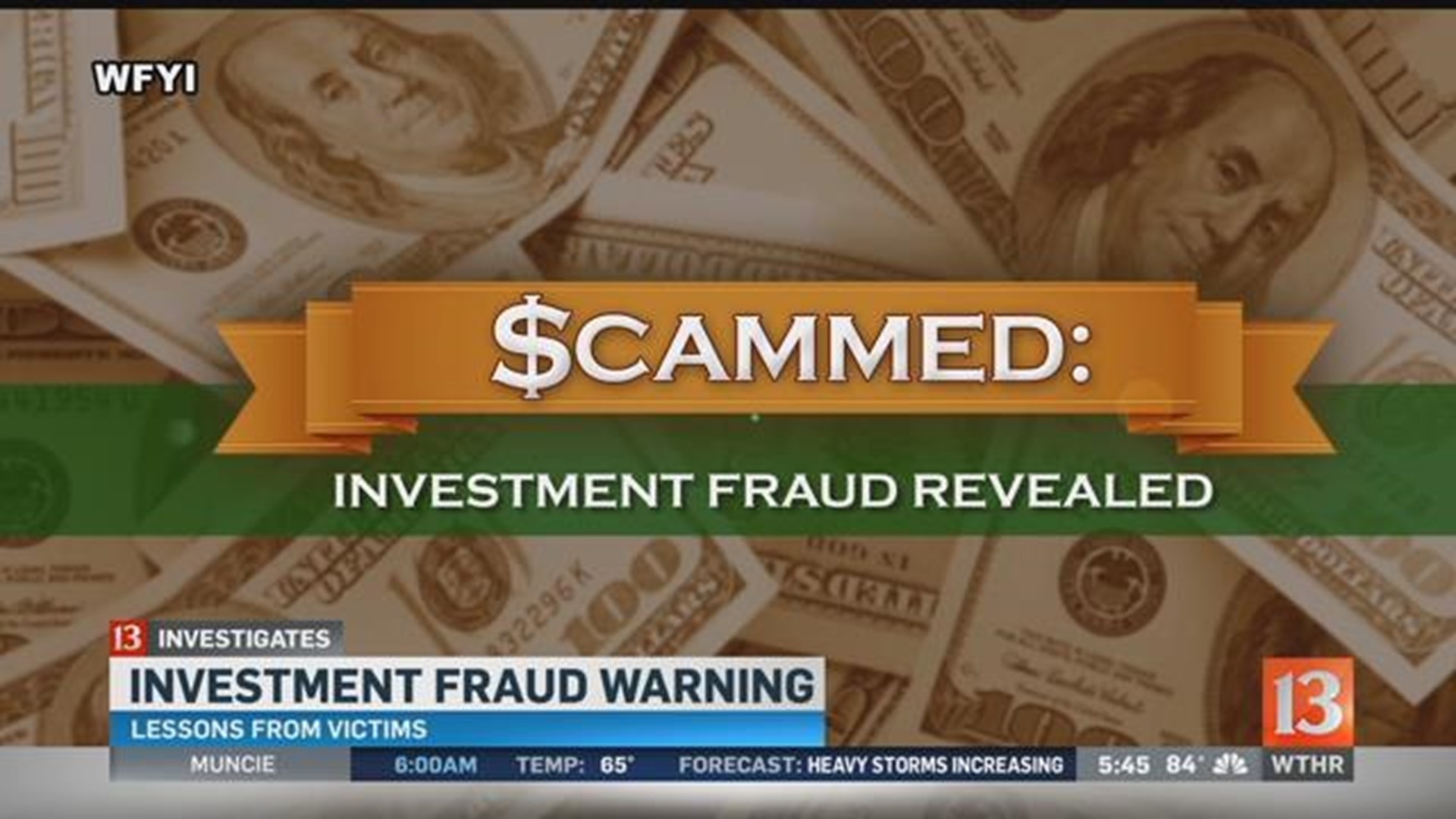 13 Investigates warns you about new scams all the time. Now the Indiana Secretary of State wants to warn you, too, and it has a new tool to do that.

“$cammed: Investment Fraud Revealed” is a new documentary created by the Secretary of State’s office to highlight the dangers of financial scams that have already cheated Hoosiers out of millions of dollars. Produced by public TV station WFYI and featuring footage from WTHR, the documentary takes investors behind the scenes of some of the most devastating scams in state history.

"People don't think here in the state of Indiana, people can get scammed… but they certainly can, and my office has seen a lot of that," Secretary of State Connie Lawson told WTHR Tuesday morning at the documentary’s premiere in Indianapolis.

The secretary of state’s office says it receives more than 200 complaints of investment fraud each year and, at any given time, has roughly 60 cases under active investigation. “From Wall Street to Main Street in cities and towns across Indiana anyone with money to invest is vulnerable to financial fraud. Business professionals we thought were trustworthy sometimes lie, cheat, and steal for their own personal gain,” explained a news release announcing the documentary.

Some of the stars of the new documentary are behind bars.

Marcus Schrenker, Vaughn Reeves and Charles Blackwelder are all serving prison sentences for cheating their investors.

The real stars of the film are the investigators who worked behind the scenes to put the scam artists behind bars and the victims who are now sharing their painful stories.

“We conducted the search warrant at the home and at his condominium. I did the analysis of the bank records and traced the money,” explained Kimberly Haskett, an investigator in the Prosecution Assistance Unit of the Secretary of State’s office, who played a key role in prosecuting Schrenker.

Considered by investigators to be Indiana’s most notorious investment fraudster, Schrenker made national headlines when he was arrested for scamming millions from his investors, then orchestrated an airplane crash to fake his own death.

“Marcus could go in and manipulate the money from Fidelity so it looked like [his investors] were always earning a return on their money,” said Haskett.

“Most of those victims were shocked that money was not there and it's not real,” said Charles Williams, another state investigator who worked on the case and who is featured in the film.  Throughout the documentary, they offer advice to other investors based on years of tracking financial fraud.

“Marcus Schrenker was charismatic. He was the son everybody wanted. He was successful,” said Haskett. “Looks can be deceiving. If it [looks] too good to be true it, it is.”

The documentary is also an outlet for victims and their families.

Mike Alma, one of Schrenker’s victims who is featured in the documentary, attended Tuesday’s premier with his wife.

So did Tanya Reed, whose father-in-law lost more than $200,000 in an investment scam operated by Blackwelder.

“I hope that the airing of this will help other people to do their homework when they invest their money,” she said.

The secretary of state recommends potential investors use the office’s online search tool to ensure investment professionals are legally registered and licensed with the state. She also advises investors to not be pressured into making a financial decision they do not understand.

“If somebody tries to solicit your business without you asking a question first, that’s a huge red flag,” Lawson said.

The documentary will air several times in June and July on WFYI. You can also watch it right now online, and investigators hope it will prevent you from becoming the next victim of investment fraud.

“It's hopefully getting the message out to people to be more aware of what's out there and to prevent this from happening. Ideally it would be great if we went out of business,” said Haskett.