Miracle of the mind: How one man's brain disorder unlocked a hidden talent

After suffering a health issue similar to a stroke in 2015, Rick Johnston miraculously became a gifted painter. 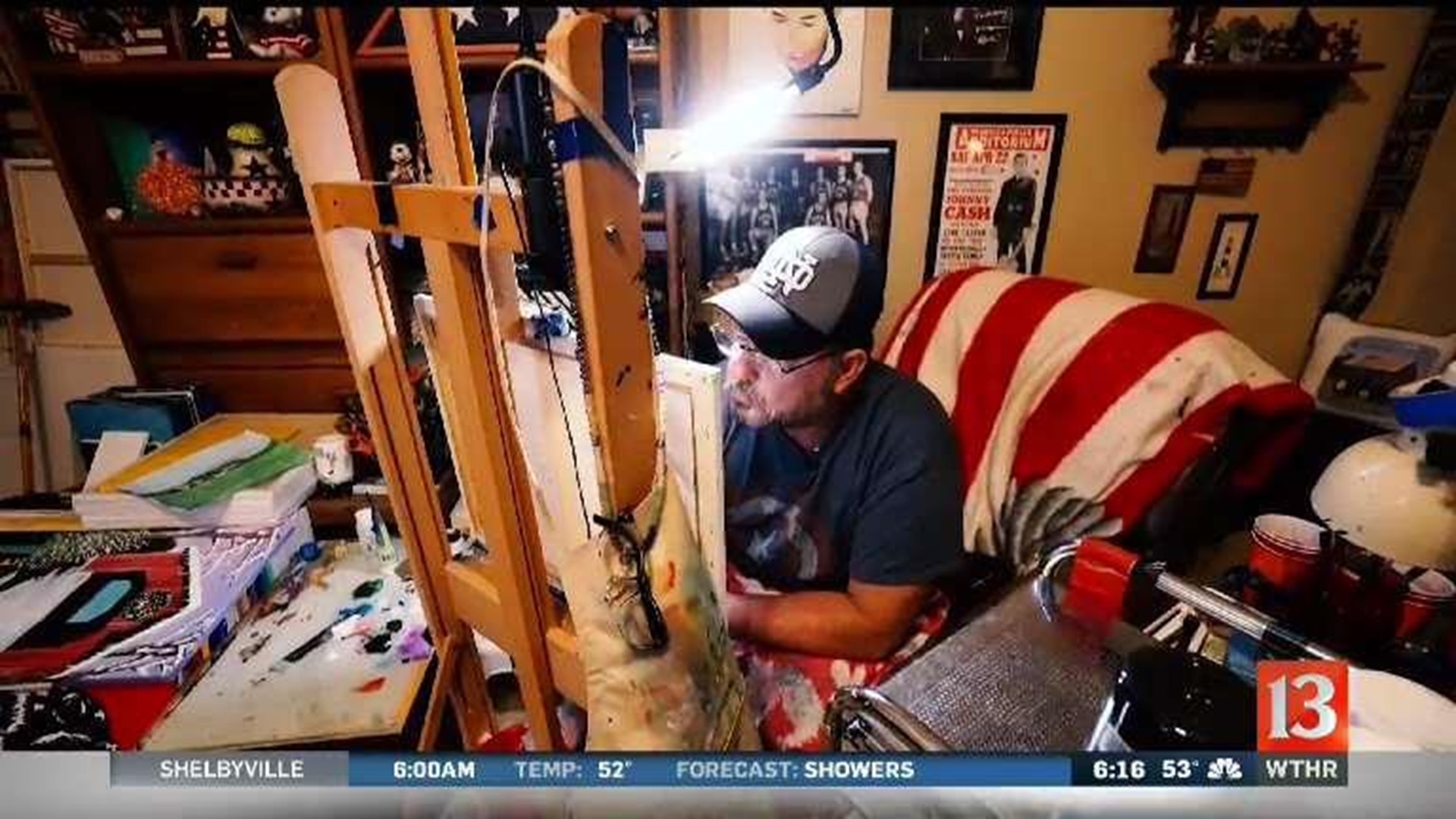 INDIANAPOLIS (WTHR) — The human brain is the largest and most complex organ in the body — a command center. It is constantly processing thoughts, emotions and actions. The mind is miraculous and mysterious even when it malfunctions.

Rick Johnston, 49, was a hardworking supervisor for Carrier in 2015. He was on his 72nd straight day of work when he suffered a health scare similar to a stroke.

"He had a neurological disorder. His brain is telling his body that he's had a stroke, but he has not had one," said his wife Cammie Johnston.

"It took me almost a year to learn how to speak," Johnston said.

Johnston's grandmother was deaf so he knew sign language. Unable to speak, he found a way to communicate with his daughter who knew some sign language.

"His brain shut off. His wires are all messed up," his daughter, Lauren Johnston said. "It's going to take time and practice to get all those wires back to where they need to be," said his daughter Lauren Johnston. "It is a scary thing, especially when the doctors can't tell you what exactly is wrong."

Eventually, Johnston returned home. But the life that he knew had changed.

Johnston suffered constant migraines and had numbness on the right side of his body. He had vertigo and was sensitive to light and sounds. His mind had reset, trapping him in a body that didn't work.

"I don't remember things. It's so frustrating," Johnston said.

"I introduced myself and said, I am here to help you talk again," said IU West Speech Pathologist Shelly Hunt. "He was pretty limited with the amount of words he could use."

Two years of therapy would help Johnston walk and talk again. But Johnston, the "old" Johnston, was still locked away until his speech pathologist offered him an unlikely key.

"Since he's unable to sign his name, my thought was if we could get a paintbrush in his hand, maybe the motion of painting would rejuvenate some of that writing ability," said Hunt.

"Of course I laughed at her. I don't paint," said Johnston. "I couldn't draw a stick figure. I doodled. But nothing by the stretch of imagination could I draw at all."

Johnston found old paint in his daughter's room and tried painting. Something happened.

"I was surprised at how good it was," said Rick's wife Cammie Johnston.

Johnston started painting in July of 2017. He started on index cards, then paper and eventually moved to canvas.

"I was petrified of the canvas. If it's on a piece of paper, I can tear it up and throw it away."

The painting continued while his daughter was away at college.

"Every single time I would come home from school or I'd come home on the weekend, I would say, 'dad these are getting so much better,'" said Lauren. "He would paint landscapes, mountains and skies. They would be gorgeous. Then he moved to barns and pop art and all these different styles. It's just progressed to something that none of us would believe."

"I went through a barn phase," said Johnston. "(A friend) sent me back a message saying stop painting barns. I've seen enough barns. If I get the most joy, it's probably impressionistic because it doesn't have to look absolutely neat."

Johnston paints for hours, sometimes days at a time.

Johnston paints with an unusual style.

"He was doing it upside down, and I said, 'you realize you're painting upside down.' And, he was like 'yeah, I know, but I'm just seeing it that way,'" said Cammie.

"I'll paint them and then halfway through, I'll flip it back over," said Johnston. "A good majority of my paintings are upside down when I paint them. I don't know why. I can't explain it. That's just how I see it. It's how it ended up coming out."

He also doesn't use his dominant hand when he paints.

"I'm right handed. Most of my painting is done with my left hand," he said.

His inspiration comes from music.

"I name every (painting). Eighty percent of them are probably named after a song from the '80s," said Johnston. "I don't listen to music at all when I paint. It's all in my head. The one thing I haven't lost is the ability to retain my music knowledge. I can't tell you what I had for dinner last night, but I can retain 4,000 songs in my head."

Then an idea emerged from the art studio that was taking over the living room.

"I wanted to share dad's talent," Lauren said. She created a Facebook page to showcase his paintings.

"Dad has always had his beard, and he's known for always wearing his Ray-Bans. He is quite literally, a bearded painter," she said.

"That's him, a beard and Ray-Bans. That's what he's all about," said Hunt.

Now, the world could see the creations coming from a home in Putnam County. The man who couldn't walk or talk for a year now had new purpose in his life.

"It's therapeutic. I get a good self worth from it," said Johnston.

Johnston now thanks God for what happened to him.

"God is good. All the glory has to go to him. I'm just a vessel," he said. "I can't tie my shoes. I can't write my name. But I can do this. I have some of the best neurologists in the world. They can't explain it. You just have to pick up a King James Bible and it's full of things that you can't explain today, right?"

Johnston said the experience has deepened his faith.

"God closes one door and makes sure that he opens another. You just got to look for it," said Johnston. "I had to find my way back to God. Once I got him back in my heart. There's alot of faith-based paintings. I would say I get the most joy out of those. The joy I get from painting my Savior is pretty rewarding."

"I'm often asked if I could go back and change . If you asked me that two years ago, I would say yes. I'd go back and be me again. Now, I wouldn't change this for anything cause there's a lot of good that's come out of this," said Johnston.

His family is amazed by Johnston's artistic talent.

"To see where it's blossomed to the bearded painter, it's amazing. It's a miracle. It's indescribable," said his daughter. "When dad sets his mind on something, he goes 100 percent."

"That's the fascinating thing about the brain. There's just that unknown," said Hunt. "The brain is an amazing thing."

"It's miraculous. It's amazing," his wife said.

It's the miracle of the mind.