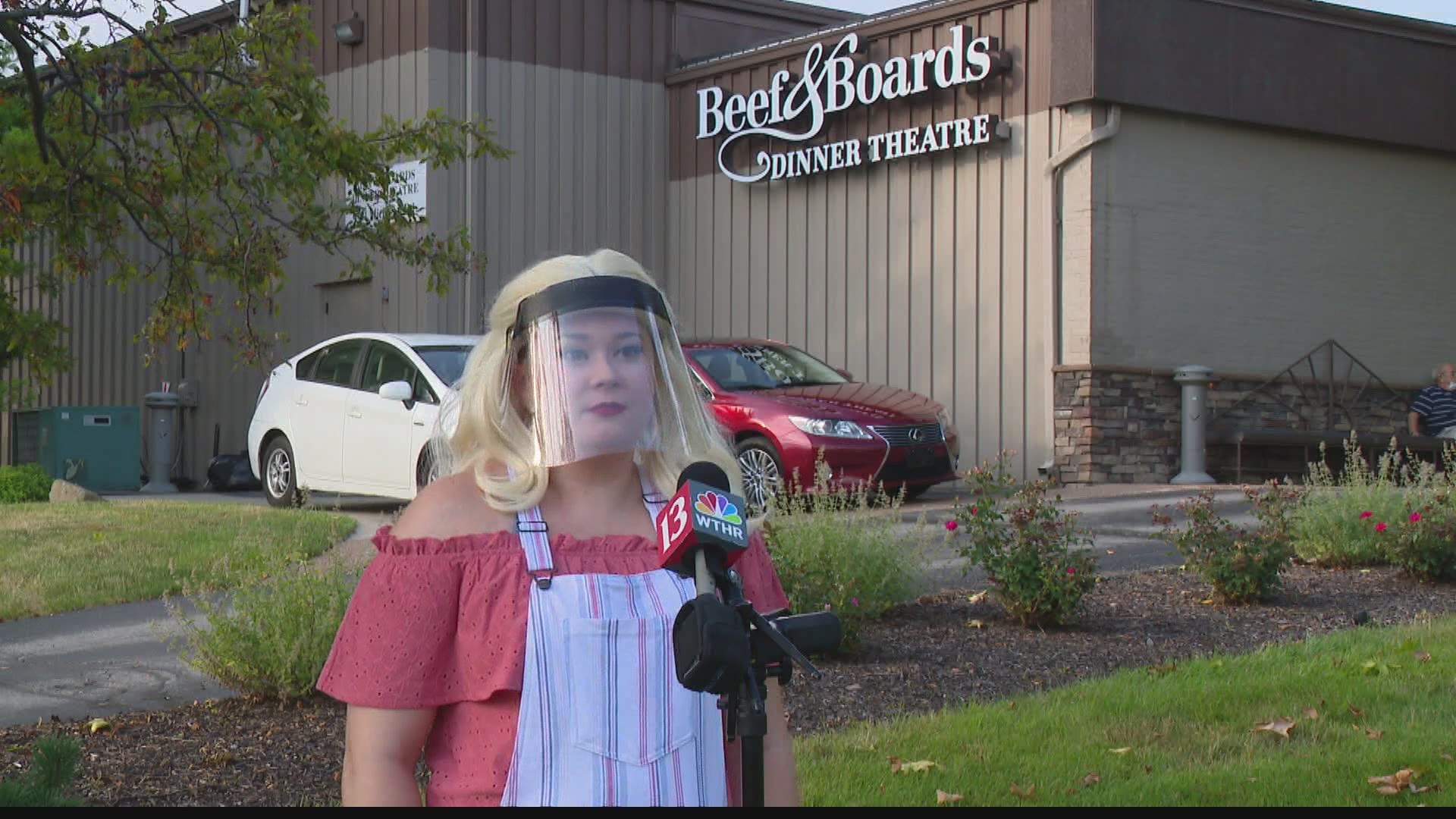 INDIANAPOLIS — Because of COVID-19, Broadway will stay dark for the rest of the year, and most live theater in Indiana is on indefinite hold.

But one local dinner theater welcomed back an audience Wednesday night, with major safety precautions in place for the performance.

It was a rare opening night at Beef & Boards, where the curtain went up for the first time in nearly four months.

Prior to the pandemic, the longest they'd been dark was five days - for a snowstorm.

"It has been electric around here since we started rehearsals about two weeks ago," said Beef & Boards co-owner Nick Stark. "Getting music again back in this building has been fantastic."

Stark says this is one of the first dinner theaters to reopen nationwide. Getting back onstage during a pandemic takes a novel way to "play." Actors will wear face shields onstage, protecting the audience and each other.

"It can be disorienting a little bit, but you get used to it after a while and these allow us to breathe and sing at the same time, whereas if we had normal masks we wouldn't be able to do the show," explained actor Samantha Russell.

"Everyone that's seen it so far has been able to see our faces, so that's great," she added.

The big safety changes for the audience begin when they first come into the theater. Everyone has to wear a mask and everyone has to get their temperature taken, using a contraption that looks a bit like an iPad. You walk up to it and it captures your face and takes your temperature before announcing if you can pass through or not.

"What that also does is store data in house so if we ever need to go back and do any contact tracing, we have it there," Stark explained.

Inside the theater, the crowds are purposely smaller, with every other table kept empty. Dinners are plated and served by masked wait staff, instead of a buffet.

And again, when not eating, masks are mandatory.

Stark says overall, they spent around $30,000 on safety preparations, some of which was paid for with a PPP loan. They're also testing staff for COVID-19 weekly. Actors are tested every two weeks. They feel they've mitigated risk and say they're excited to go on with the show and get back to performing, safely.

"I'm so grateful for this opportunity," Russell said. "It helps me forget, at least for like a minute about like what's going on around the world with everything and help others forget too and just lose themselves in a fun 60's revue."

Beehive: The 60's Musical has 43 performances scheduled through August 9.

Click here for ticket information and to learn more about the theater's safety procedures.