Justin Wagers' grandfather on Lauren Spierer disappearance: "I don't think that's in him."

Investigators searched a second residence Thursday in connection with  the Lauren Spierer investigation. 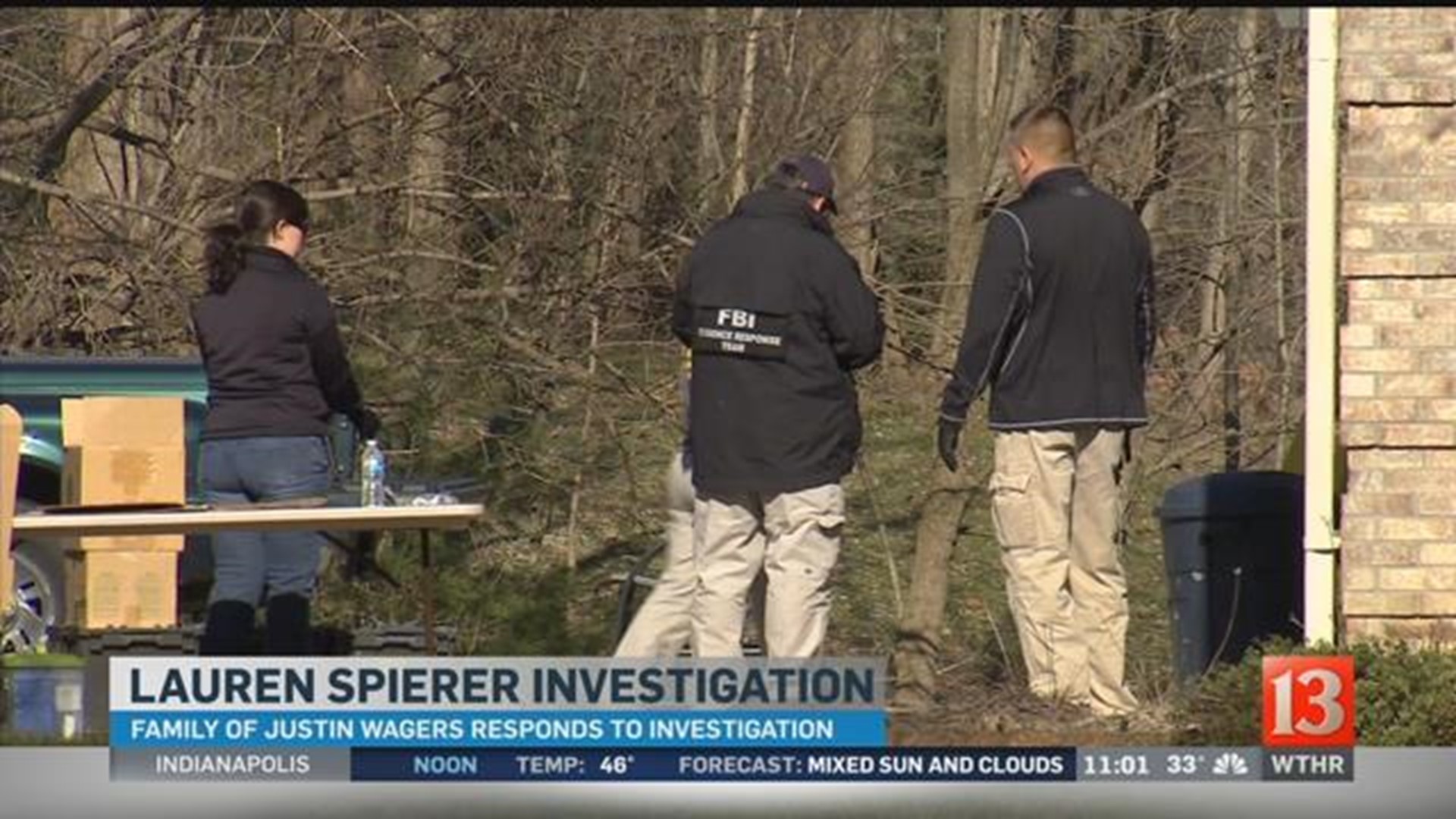 Investigators searched a second residence Thursday in connection with  the Lauren Spierer investigation.

On the same day that brought FBI and Bloomington Police to a residence in Martinsville on Old Morgantown Road, investigators also searched a second property in Trafalgar that belongs to Justin Wagers' father and grandfather.

Wagers lived at the Martinsville home with relatives until he was arrested in 2015 for exposing his genitals to a woman at a Circle K gas station in Johnson County. Wagers was charged with indecent exposure after the woman identified Wagers from his photo on the state sex offender registry.

Federal investigators dug for evidence at both locations, and used cadaver dogs in the search. Investigators hauled away Wagers' truck from the Martinsville search, which law enforcement sources say will be tested for DNA.

As the FBI sifted through dirt from Wagers mother's home in Martinsville, police were also in Trafalgar at a property owned by Doug Wagers, Justin Wagers' father. He told Eyewitness news, "They had the cadaver dogs. I thought the dogs were no good, but actually they was hitting a bunch of times."

Wagers showed our camera the corner of a camper where the cadaver dogs hit on a scent and police proceeded to dig. He believes the dog may have picked up the scent of the man who previously owned the camper who reportedly died inside.

Doug Wagers told us the police "moved everything out of the camper. That went on all day and they were probing and digging they put the dogs inside the camper and hit at the corner."

Wagers has not been named a suspect and his attorney says he has nothing to do with Lauren Spierer's disappearance. Spierer, an Indiana University student, went missing in 2011 after a night out with friends.

Both Wagers' father and grandfather acknowledged that Justin had some legal problems in the past, but also say they cannot imagine he would be involved in Lauren Spierer's disappearance.

Justin's father showed us his property Friday morning and told us that the FBI and other law enforcement, along with cadaver dogs, were there Thursday for several hours. He said they searched the grounds and a trailer, but he does not believe they found anything.

Frank Wagers, who is Justin Wagers' paternal grandfather, can't come to terms with the idea:  Bloomington Police and the FBI spent Thursday digging on two different family properties looking for clues into the disappearance of missing IU student Lauren Spierer.

He sat down with us inside of his home. He has been watching the news since the story broke Thursday, but does not believe his grandson is involved.

"I don't think that's in him. I don't think that he had anything to do with nothing like that. I don't. I just don't believe he did. It just doesn't fit him. He was just too good of a boy," said Frank Wagers, Justin Wagers' grandfather. "He's not a murderer. I can't see that."

Records from Morgan County Court show Justin Wagers has a history of exposing himself and performing sex acts in public, exposing himself to school children and even a grandmother dating back 15 years.

According to court records, Wagers has criminal convictions in five counties dating back to 2000. He has pled guilty to 10 counts of public indecency, four battery charges, two charges of vicarious sexual gratification, and one charge each of intimidation and invasion of privacy.

He has been a registered sex offender since 2007.

Wagers' ex-wife got a protective order against him in 2011 after police records show he repeatedly showed up at her home and got physical with her.

Court documents show Wagers threatened his ex-wife over the phone in 44 phone calls over two days, telling her he would sneak into her home and kill her. Those documents also show Wagers later showed up at her house.  Wagers pled guilty to felony intimidation.

Despite it all of that, Wagers' family insists he had nothing to do with Lauren Spierer's disappearance.

"And you don't think it's possible that it's Justin?" Eyewitness News asked him.

"I sure don't. I just can't see that," Frank Wagers replied.

Still, his father says, "Justin's a good kid. I don't think he did all the things they said he done. I'm not saying he's perfect but in my eyes he's a good kid. He's gotten caught up over the years."

The investigation has garnered national attention. Lauren Spierer's mother told Eyewitness News that she wants to find Lauren "more than anything in the whole wide world."

Still, investigators are not saying if this week's searches are the break in the case the missing student's family has been waiting on for nearly five years.

Sources say that investigators did not find any remains at the Trafalgar location.

See all stories about the Lauren Spierer investigation