The man behind the growth of hockey here saw it coming from about three years away. 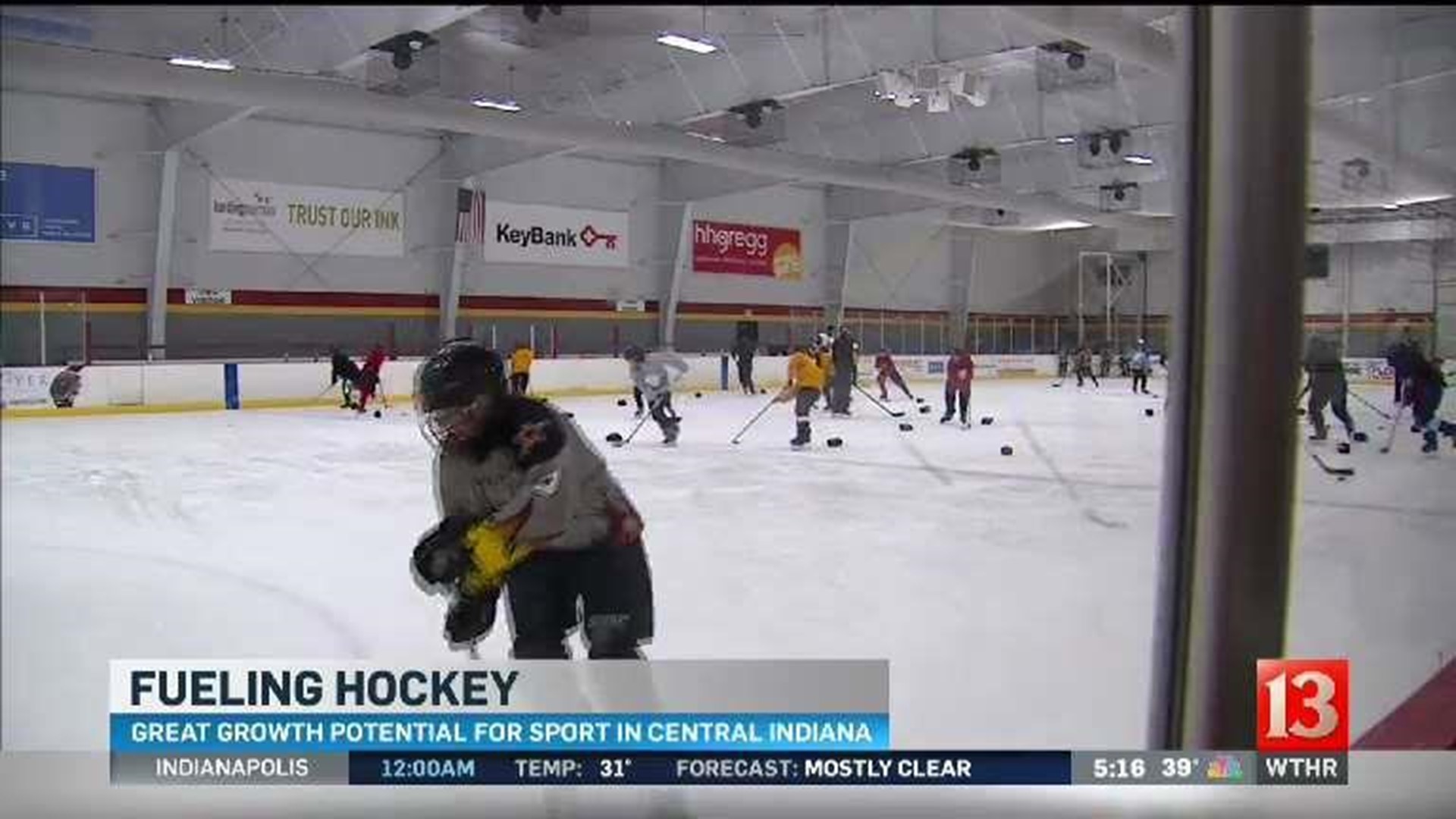 INDIANAPOLIS (WTHR) - Deep in the heart of basketball country, hockey may be the fastest growing sport -- and that's not a surprise to everyone.

The man behind the growth saw it coming from about three years away. That's how long ago Indy Fuel co-owner Sean Hallett made a bet that he could turn more Hoosier families into hockey families.

He put it this way: "Indianapolis, for a big market of 1.5 million people in the metropolitan area, has been underperforming (as far as hockey goes) and the big reason for that is that there has been a shortage of ice."

So, Hallett set out to change that.

It all starts with the Indy Fuel, the hockey team that Hallett never wanted to own. Unlike his hockey-obsessed friends, Sean grew up in Canada thinking more about basketball and playing for his high school team. After that, he got into the car business, eventually owning and operating one of the largest Ford dealerships in Canada, Erinwood Ford in Toronto. As he approached 40, he wanted to leave the cold weather behind, so he left Canada and headed south of the border. He was headed to Florida, but stopped in Indianapolis to visit his father Jim, who was part owner of Indiana Ice hockey team, and they talked about the opportunity for minor league hockey in Central Indiana.

The Indiana Farmers Coliseum was being renovated and its 6,000-seat capacity would qualify for a franchise in the East Coast Hockey League. Dad asked son if he was interested in taking an ownership stake in a new franchise that would apply to join the league in 2014. Sean wasn't interested - until a trip to a Chinese restaurant and a fortune cookie that beckoned him to "look for opportunities in sports". The businessman decided to get in. In other words, the guy who grew up in hockey country loving basketball, was moving to a basketball state to get into the hockey business.

For many team owners, the team is the goal. It's a trinket and symbol of success in another field of endeavor. For Hallett, team ownership was the starting point. He knew from the get-go that the possibilities offered by owning a minor league hockey franchise with 36 home dates a year were limited. Ticket sales and selling the odd jersey and sweatshirt with the team logo could only get you so far. He knew that the real value of the team was in the brand and leveraging that brand into other areas.

First stop: an aging ice rink in Fishers, the Forum. After a multi-million dollar rehab project, it became the Fuel Tank of Fishers, and, it's where the brand begins to take off.

"Right about when school gets out at 3 o'clock, right up until 11, 12 o'clock at night, this ice is pretty well in use," Hallett says as he looks over one of the two rinks. Young hockey players are running drills under the watchful eye of volunteers and a few Indy Fuel players. The number of kids playing has grown by 20 percent a year after the team organized the Junior Fuel Youth Hockey program. By next year, more than a thousand Indianapolis families will make the rink part of their lives.

Andrea Houck is a hockey mom who has seen the benefits for her own son, who is gaining skills, confidence, and friends. "We have awesome uniforms, we have awesome coaches, we have a lot more families involved with our program now which is just fantastic," Houck said.

Also fantastic if you are Sean Hallett, who says the growth of hockey in Central Indiana is only really limited by the lack of ice. He has plans to change that: two more arenas, one on the north side and one on the south side of town. Both will operate under the Fuel Tank brand, dual rinks at the north side facility and four on the south side. He also hopes to expand the Junior Fuel program operating at the Indiana State Fairgrounds.

It's a business plan built for the long haul. The Fuel has a 25-year lease at the Coliseum and every intention to build a business around the team that's here at least that long. "Profit shouldn't be a dirty word in the minor league sports business because you need those profits to be here for the long term," Hallett said. "We've seen too many minor league teams come and go here in Indianapolis and around the country over the years."

The vast majority of the ECHL's 29 franchises lose money, but the Fuel are one of the success stories. So much so that the league is bringing the 2018 All Star game to Indianapolis. It will be a celebration of hockey, and will include some elements that big fans and casual observers will enjoy. And it shouldn't be surprising because Indianapolis has more of a hockey tradition than you may realize. For one thing, the Fuel's home ice at the Indiana Farmers Coliseum opened in 1939 as the home of the Indianapolis Capitols of the American Hockey League. Today, it is the oldest professional hockey venue in North America. Nearly 80 years of tradition and a building block in a tradition that a former Canadian basketball player hopes to build in his new Indianapolis home.