Carver McGriff was one of the D-Day heroes in the Normandy landings. 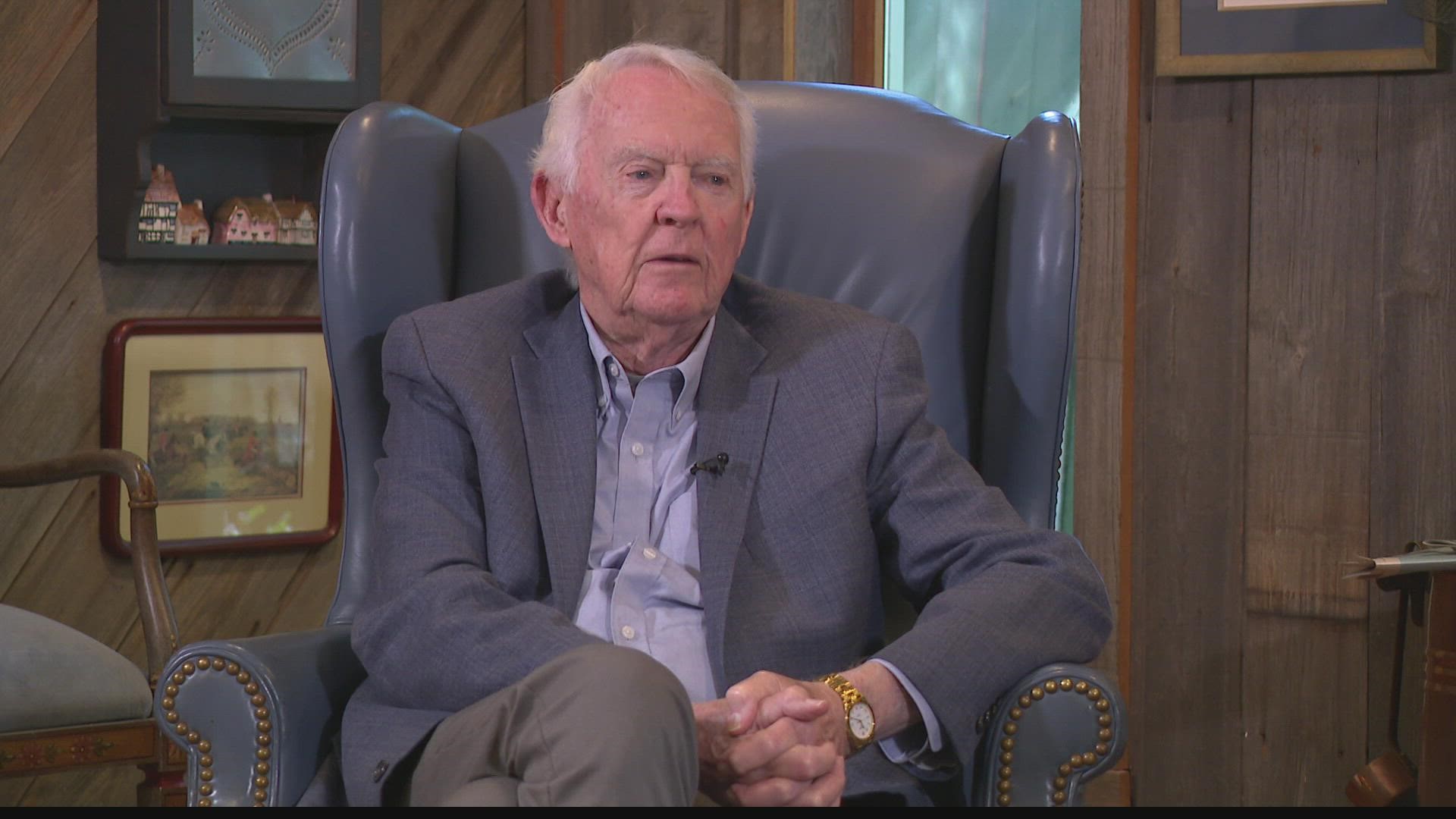 INDIANAPOLIS — Carver McGriff is part of The Greatest Generation.  He was one of the D-Day heroes in the Normandy landings during World War II.

The 1942 Shortridge High School graduate was just 19 years old when he landed on Utah Beach.

"I can remember it vividly," said McGriff. "I was like most kids my age. I thought maybe I can handle this. It's an exciting adventure. The first thing that caught my attention and helped me realize what was happening here was a dead paratrooper."

McGriff remembers a battle on Hill 122.

"My job was to be on a machine gun. We were surrounded by the enemy," said McGriff.

McGriff said his division ran out of ammunition and did not have enough firepower to continue the battle. He says all their officers were dead and those who remained surrendered. McGriff said he was wounded and taken by the Germans as a prisoner of war for a month.

"I was wounded in both legs by artillery and one arm, so I couldn't walk," said McGriff. "While I lay there, two stretchers came over and carried me over to a little room on the side. We were at a hospital and gave me medical care. They did surgery on my legs. I marveled that they had many of their own people out there in pain. It would have been understandable that they left me suffering but instead they cared for me," said McGriff.

McGriff said soldiers who recovered were sent to POW camps, so the men who were left extended their hospitalizations as long as they could. McGriff stayed in bed until American troops rescued him. He was brought back to England for five to six months and then placed in a non-combat unit. He has received a number of medals and honors for his service.

Credit: Carver McGriff
Carver McGriff is standing in the American Cemetery at Omaha Beach praying for the men who are buried there.

When he left the military, McGriff got a business degree from Butler University. He spent time selling insurance and working for a grocery company, but was unhappy in those careers.

"I went through a period of five years when I didn't know what to do with my life," said McGriff. "I felt sorry for myself. I got mad at God. I said bad things to God. I once said, 'What the hell are you doing? I say my prayers and nothing happens.' Of course, God answered, but that was all part of my learning my relationship with God, which is one of being loved. If I would just be patient, what happens will always be good," said McGriff.

McGriff felt a tugging to work as a pastor, so he went to seminary. He would eventually be the senior pastor at St. Luke United Methodist Church for 26 years.

In 2021, McGriff has been involved in a different battle: terminal cancer.

He has undergone surgeries, but now at the age of 96, McGriff has decided no more treatment.

"I said no. Whatever's left, I'll enjoy it, but I'm not going to go through radiation," said McGriff.

When he learned he had terminal cancer, he put together a bucket list of places and people he wanted to see. One of the first places on his list was a return to Utah Beach.

"Senator Todd Young and his outstanding staff were responsible for obtaining French visas for us that arrived in less than 24 hours before we were scheduled to leave for France. God and Senator Young get all the credit," said Marianne McGriff, Carver's wife.

Carver has been back to the beachhead in France a dozen times since the Allied invasion 77 years ago.

"That was a place that was important to me because of what I learned about myself and what I saw of the suffering that took place there," said McGriff. He details his experience in the book, "Making Sense of Normandy."

McGriff said his attitude has changed since D-Day.

"We were told when we got off the boat, if you see anybody wearing a uniform like theirs, kill 'em," said McGriff. "I know that the Germans had an element there that's hard to understand that brought about the Holocaust, and those people I hate to this day. But so do the German people."

McGriff said his heart has softened toward Germans.

"I thought I could either hate them for what I saw or forgive them. And I forgave them," said McGriff. "I knew by my Christian faith that true love has the element of forgiveness, and forgiveness is not something you can fake. You either feel it or you don't."

Credit: Carver McGriff
Carver McGriff, Christian Levaufre and Major Chris Gamble are in Périers for another Normandy celebration where Carver spoke as the only veteran present.

Even though doctors have given McGriff less than a year to live, the decorated veteran who fought for his country is now at peace.

"If you trust God, everything is going to work out well. Even the bad things. God always finds something good in what's bad," he said.