Lugar was a Rhodes Scholar who was first elected to the Senate in 1976, after eight years as Indianapolis mayor. 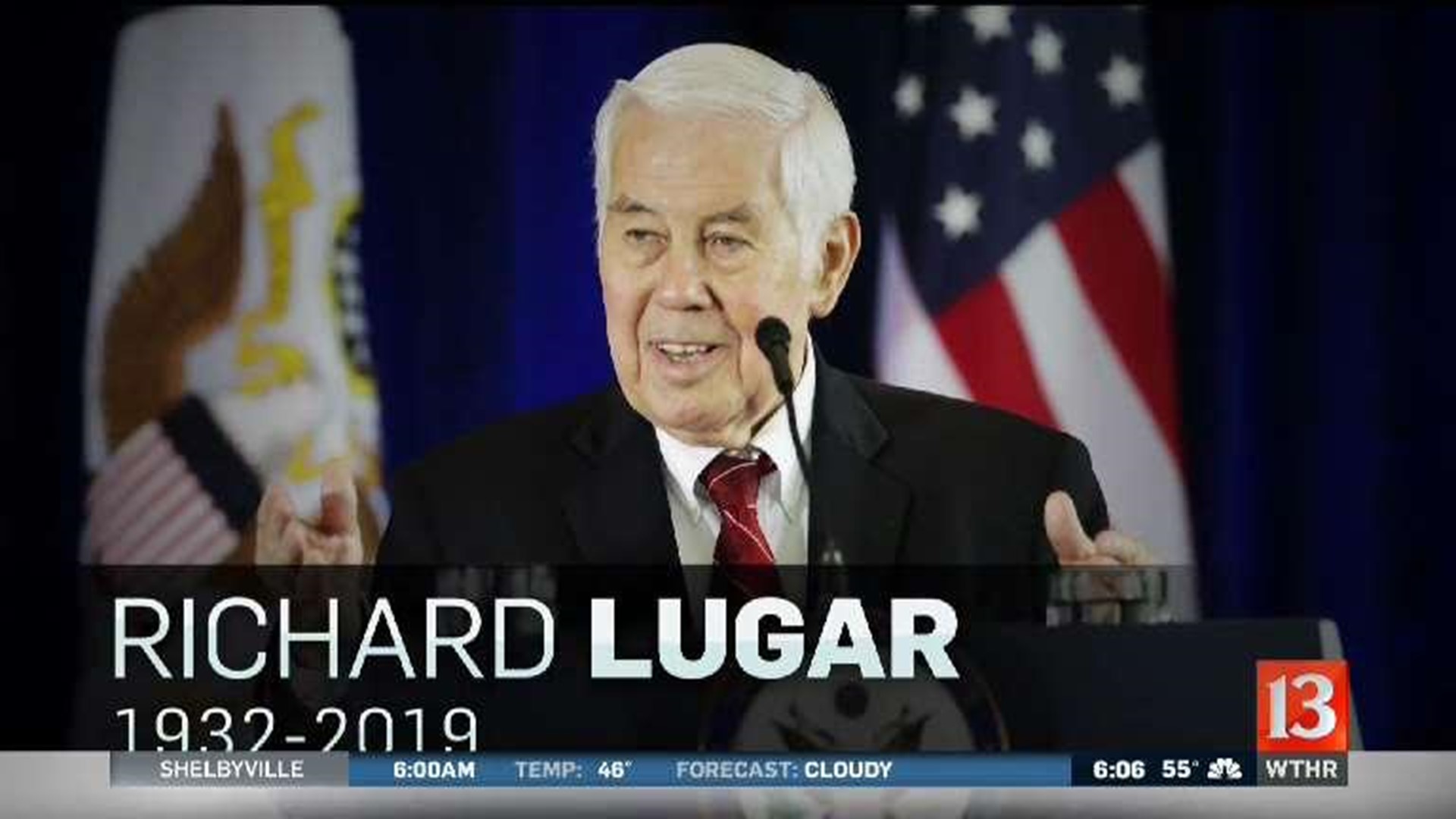 INDIANAPOLIS (WTHR) - Former Indiana Senator Richard Lugar has passed away at the age of 87.

Lugar was a Rhodes Scholar who was first elected to the Senate in 1976, after eight years as Indianapolis mayor.

In the statement, the Lugar Center said the cause of death was "complications from CIDP (chronic inflammatory demylinating polyneuropathy)."

Senator Richard G. Lugar, 87, who served as Mayor of Indianapolis from 1968 to 1975, a U.S. Senator from 1977 to 2013, and President of the Lugar Center since 2013, died peacefully on Sunday April 28 at 1:44 am. at the Inova Fairfax Heart and Vascular Institute in Virginia. His loving wife Char, his four sons Mark, Bob, John, and David and their families were with him throughout his short illness in the hospital. The Lugar Family expresses their deepest thanks to Dr. Megan Terek and her staff for the exceptional and compassionate care that they provided.

Senator Lugar is the longest-serving member of Congress in Indiana history. He was first elected to the Senate in 1977 and served until 2013.

It was great sadness that I report Sen Richard Lugar passed in his sleep early this morning. This picture was taken at the White House shortly after he received the Medal of Freedom from the President. He will be missed, admired and remembered as long as there is an Indiana. pic.twitter.com/YUjZAIm8uC

He was elected to the IPS School Board before being elected to two terms as Indianapolis mayor starting in 1967.

Described as a generally loyal conservative, Lugar lost his bid for a seventh Senate term in the 2012 GOP primary after attacks over his reputation for cooperation with Democrats and friendliness with President Barack Obama.​

Lugar gained little traction with a 1996 run for president, but he focused on the threat of terrorism years ahead of the Sept. 11 attacks.

“Words are hard to come by right now. Dick Lugar was not just the finest public servant I will ever know, he was the finest person. He embodied all we can hope for in our leaders: brilliance of mind, purity of motive, stainless in character, tireless in the pursuit of duty. Incomparably knowledgeable about the world, he was first and always a patriot, utterly dedicated to the security and wellbeing of his fellow Americans. His voice is now silent, but he is still with us. Indianapolis is a thriving and vibrant city because of him. The world is safer from nuclear danger because of him. And so many of us, while falling far short of the standards he set, are vastly better people because of him.”

Among his legacies is his work towards dismantling nuclear, biological and chemical weapons around the world.

The Indiana Republican even received the rank of honorary Knight Commander of the Most Excellent Order of the British Empire on orders from the queen of England in 2013.

After leaving office he began the nonprofit “The Lugar Center.” It focuses on global food security and the nonproliferation of weapons of mass destruction among other issues

On Sunday, Indiana Governor Eric Holcomb ordered flags to be flown at half-staff "from now until sunset on the day of his funeral, which has not yet been announced."

In a statement Governor Holcomb said, "He was an officer and gentleman, father and faith leader, a Mayor and Senator, a diplomat and legendary role model to millions."

The ceremony will take place in the Richard G. Lugar Plaza on the south side of the City-County building at 200 E. Washington Street at 11:45 a.m.