Boy Scouts give girls a chance to experience new adventures

They're part of the newest frontier in scouting — at least in the United States. They're girls who have joined the Boys Scouts of America, a program now called Scouts BSA, and they are having a blast. 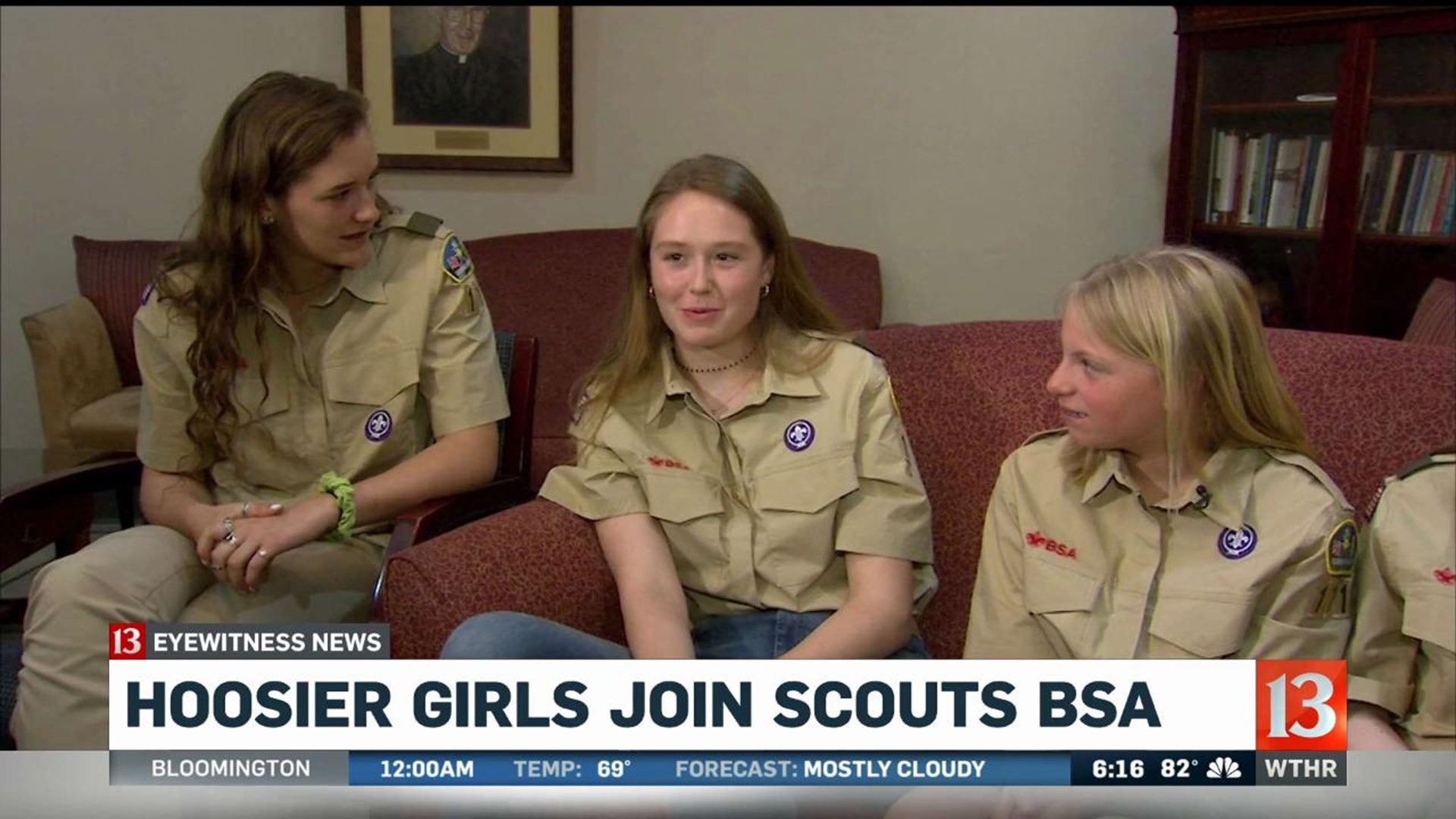 The weather was less than ideal.

"It was rough, cold and rainy the whole time... Our toes and fingers were freezing!" Several chimed in, talking over one another as they spoke. "It was a constant check. There's a campfire, go warm by it or open another pack of hot hands to keep your fingers from falling off."

Scouts on a camp out. (Courtesy Anne Shumaker)

Miserable conditions to be sure, but they loved it.

"It was fun spending time with friends," one scout said.

Another added, "We learned to cook and how to use a camping stove."

They also learned to sharpen knives, use axes to split wood, start a fire and pitch a tent. All typical skills Boy Scouts learn.

What makes BSA Troop 171 a bit different is that the scouts are all girls between the ages of 11 and 17. They're part of the newest frontier in scouting — at least in the United States. They're girls who have joined the Boys Scouts of America, a program now called Scouts BSA to reflect its newest membership.

Eyewitness News talked with seven members of BSA Troop 171 and their assistant troop leader in the warm and dry confines of St Luke's Catholic Church, where they've been meeting once a week since February.

Per Scouts BSA policy, only first names will be used.

Eyewitness News talked to some of the new scouts in BSA Troop 171. (WTHR)

All the girls raised their hands when asked how many had been Girl Scouts. One still was, choosing to belong to both organizations.

When asked what they liked about Scouts BSA, Elaine, 11, said, "I like how we have meetings every Wednesday (instead of once a month.) And we get to do things girls normally wouldn't get to do."

“It's cool we get to learn for ourselves”

Carly, 13, said, "We also get experience on how to use pocket knives, axes, hatchets and saws... How to use them properly and be safe around them."

The girls also mentioned the fitness tests and lifesaving techniques.

Lilly said, "The girls get to try out something the boys get to do."

When asked if girls do it better, Lilly said, "I don't like to think of it in that way. As long as we are able to do it good enough... or really good, that's good enough for me."

Not everyone is as enthusiastic as Troop 171 is about girls joining the group formerly known as Boy Scouts.

The Girl Scouts of America shared this statement when asked for a response:

Only Girl Scouts brings the time-tested methods and research-backed programs that speak to leadership development specifically for girls. Girl Scouts remains committed to a girls-only environment.

Offering safe, hands-on, girl-led, girl-centered learning in STEM, the outdoors, and entrepreneurship, and abundant opportunities to develop invaluable life skills, Girl Scouts helps all girls take the lead early and often. And we’re backed by more than 100 years of experience and expertise in the field.

Denise Purdie Andrews is assistant scout master for BSA Troop 171. Andrews has a long history with the Boy Scouts of America. She's been a registered scout leader since 2000 working with boys up until now.

"No, no. They're two very different programs," she said. "I find it interesting no one says to a soccer player, 'Oh, you're going to play baseball, also?' There's no presumption of exclusivity there. It's really no different. It's really about what's best serving that youth in the moment."

Some of the girls said they initially faced a few questions when they decided to join Troop 171.

Carly said, "Some of the boys were like 'We don't understand. Girls should just stick to the Girl Scouts,' but then when I explained it was about doing the same things they were doing they acknowledged it was pretty cool."

Lilly said when she told her older brother about the wet and cold camping conditions, "He said, 'Wow, none of the boys in my troop would do that.' He's in high school and I'm like if a bunch of fifth grade girls can do it than a bunch of high school boys can do it."

Andrews noted the requirements for boys and girls are exactly the same. She said, "We each have things that come easily and other things that challenge us. It doesn't seem to break down by gender. I've had boys who struggle with knots and those it get right away and it's the same with girls."

This means for the first time, girls have a chance to earn the highest rank in scouting, the coveted Eagle Scout designation.

The girls said they've enjoyed sharing another thing in common with their dads and brothers. McKenzie said when she asked her dad about the most difficult badge to earn, "He told me he had to build a shelter and spend the night in it."

The experience helped Becca become more independent. She said, "If I needed to do something outdoorsy, tie a knot or use an ax, I'd ask my dad or brother, but it's cool we get to learn for ourselves."

With two camping weekends now under their belts, they've noticed a boost in confidence.

Carly said, "I'm more capable than I thought I was. And if I try to learn something new, I'm capable of that."

Troop 171 was chartered in February and began with five adults and five members. At last count, it was up to 30 members.